Ideas from the public will be addressed, says govt roadshow in Naas Poplar Square 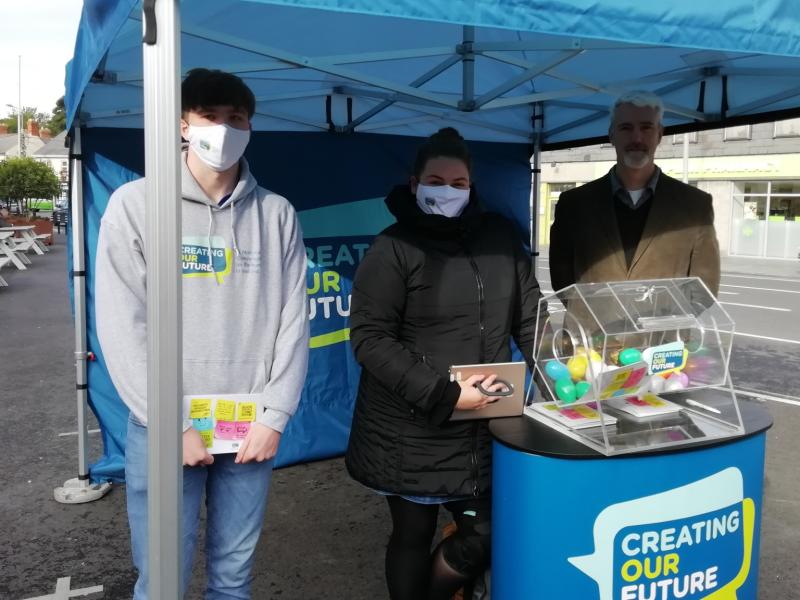 A government roadshow rolled into Poplar Square in Naas today.

Inviting in passers by with free coffee and tea, and games, representatives assured them that all ideas they presented at the roadshow will be examined by the government next year.

The roadshow, titled Creating Our Future (COF), is a government-led national brainstorm that examines "the role research can and should play in addressing opportunities, challenges and hopes for the future of Ireland."

COF will visit every county in Ireland between now and October 25 in order to encourage members of the public to engage in a conversation about the future of research in Ireland.

It is being carried out in association with a variety of government departments, as well as the Science Foundation of Ireland (SFI).

Commenting on the importance of the event, Rebecca Wilson, a Senior Executive with the SFI, told The Leinster Leader: "We want to find out about what local communities are passionate about, and how best to apply research across a variety of areas, including technology, social science and health and wellbeing."

She explained that the idea was based on similar initiatives in Belgium and the Netherlands, and was first pitched to Minister for Further and Higher Education, Research, Innovation and Science Simon Harris, who welcomed the idea.

"It has received cross-government support... every single suggestion will be examined by expert committees. In other words, if you take part, you will be heard and informed about your idea."

Ms Wilson elaborated that the event was launched last Friday at Greystones, and since then, they have received a variety of ideas.

"Some of these relate to wheelchair access, for example, but we have received a lot of people putting in queries regarding climate change... one idea involved the proposal of the Irish government looking into introducing electric airplanes."

"The topics of research that we are covering is so broad," she added.

A staple feature of the CFO Roadshow that is certain to catch everyone's eyes is the idea wheel, which Ms Wilson explained: "If you are stuck for ideas, you can spin it and the wheel will pick the topic area for you!"

In addition, those who submit their ideas on the provided papers enter into a draw to get goodies from small egg capsules.

One curious visitor at the event was Naas man Aidan Cummins, who revealed to The Leader that his idea involved his wish to see an improvement in the Irish healthcare system.

Ms Wilson also said that each roadshow stop will feature special guests in the form of experts across a plethora of disciplines.

The relevance of Climatology:

One such expert attending the event was Dr Rowan Fealy, a lecturer of Geography who specialises in Climatology at Maynooth University (MU).

Sitting down with The Leinster Leader to discuss the importance of the field, Dr Fealy said that MU in particular "has been developing a strong brand around (research into) climate change."

Dr Fealy revealed that he first heard about the COF while working on a large-scale project examining Carbon Dioxide (CO2) rates in both rural and urban areas of Ireland; around 25 benchmark sites in total.

"It has cost €5 million over the past 2 years, with a large part of the funding coming from the SFI, and any members of the public who wish to find out more about it can do so by visiting TerrainAI.com," he said.

As for his thoughts on the CFO, Dr Fealy added: "The good thing about this event is that we are assessing climate on both a nationwide and on a national level."

"Even driving into Naas today, the amount of traffic jams got me thinking about CO2 rates in Ireland."

"I have confidence that this project will be an incredible opportunity for people to make their ideas known and that it provides a solid direct link to the government."

Referring to his CO2 project idea, he said: "We want to measure the influence of human behaviour and its correlation to CO2 emissions."

"We are researching into a variety of facets, including which areas can best absorb C02."

He continued: "We want to change the way the average person thinks about CO2 emissions... there is the argument that Ireland is too small to make a big difference, but that's wrong, we are not too small."

When asked about a recent critique from People Before Profit politician Paul Mahon regarding the construction of data centres, he said: "We can't avoid development but what we can do is look at the best way to implement positive changes in both rural and urban areas."

Although Dr Fealy once more emphasised that "there is no silver bullet solution", he also agreed with recent comments from Green Party leader Eamon Ryan that wind energy would greatly benefit Ireland.

Also attending the event was Dr PJ Wall, who works with the ADAPT research centre in Trinity College Dublin.

ADAPT, according to its website, is the world-leading SFI Research Centre for AI Driven Digital Content Technology, and is partnered with a number of institutions, such as: Dublin City University, University College Dublin, Technological University Dublin, Maynooth University and the National University of Ireland Galway.

Dr Wall explained to The Leader that he specialised in the topic of Artificial Intelligence and the arguments of ethics that surrounds it.

"One example that we look into is the possibility of self driving cars: what happens if a cat goes in front of the road? or what happens if a pregnant woman goes out onto the road? What if both go on the road? Is it then OK for the car to instead kill the cat over the woman? Or should the car stop or veer off the road altogether and possibly go over an edge and thus risk injuring or killing the driver?

Also, if autonomous cars do become popular, for example, will the average van driver be left without a job?"

"There's all these questions regarding what the most ethical thing to do is in regards to technology," he added.

Dr Wall also said that he thinks that the CFO was a great opportunity to meet people from variety of backgrounds: "I would consider myself to be a rather privileged man... I'm white, educated, European, etc. I don't really know what its like to be disadvantaged."

"Its interesting to find out the challenges facing people, especially young people: for example, I know students who have started third year but have only now been able to sit in lecture halls due to the pandemic. They've missed out on so much," he added.

For more information on how to get involved with the CFO campaign or to submit an idea, visit www.creatingourfuture.ie.