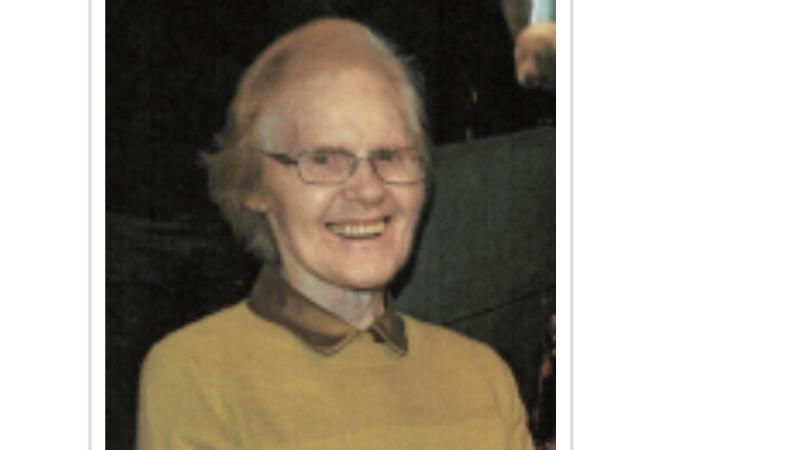 The late Bridget (Bridie) Farrell (nee Coneely). May she Rest In Peace.

Reposing at The George Mullins Funeral Home, Kilcullen Road, Naas (eircode W91 CD0K) on Monday from 4pm with Removal at 6pm arriving at The Church of The Irish Martyrs, Ballycane, Naas at 6.30pm, (eircode W91 K6CT). Funeral on Tuesday after 11am Mass to St. Michael's Cemetery, Athy. Family flowers only please. Donations, if desired, to The Irish Heart Foundation. Donation box in church.

Reposing at her daughter Marie's residence (W23W5C6) on Monday from 4-8pm, with prayers at 7pm. Removal on Tuesday at 10.30am to arrive at St. Mary's Church, Maynooth for 11am Funeral Mass, followed by burial in Laraghbryan Cemetery.

Reposing at her home in Rostigue, Monasterevin (W34 KD98), on Sunday from 7pm until 9pm. Reposing on Monday at O'Reilly's Funeral Home, Harbour Street, Tullamore (R35 FC84), from 5pm until Removal at 6.30pm to the Church of the Assumption, Tullamore. Requiem Mass on Tuesday morning at 10am followed by Burial after Mass in Clonminch Cemetery, Tullamore.

Formerly of The Curragh.

Wife of the late Jim.

Family flowers only please. Donations, if desired, to "The Friends Of St. Brigids Hospice, The Curragh". Donations box in church.