Clinical Raheens' second half surge propels them to county semi-finals 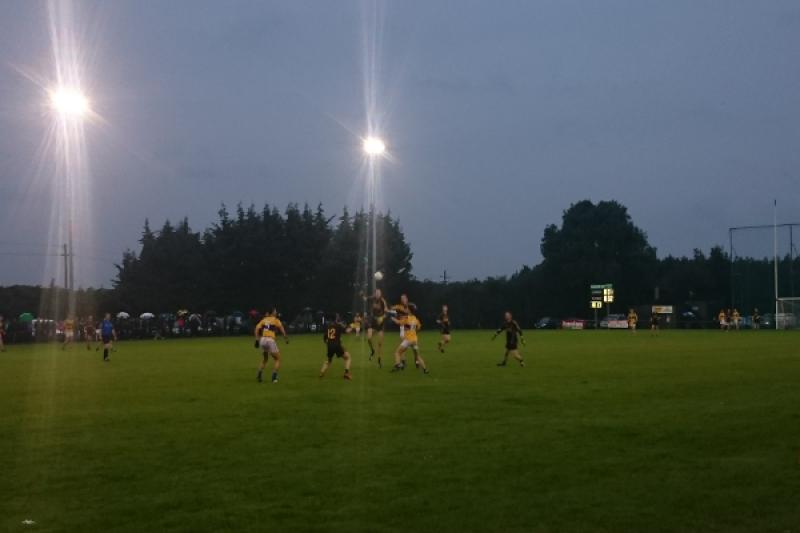 Raheens          1-14 Clogherinkoe  1-9 Raheens have booked their place in this year's county intermediate football semi-finals with a confident victory over 13-man Clogherinkoe in a rain-soaked Ballyteague on Friday night. The conditions were atrocious, and while it restricted the quality of football played throughout the tie, there was no shortage of intensity during this encounter. Despite the 'yellow weather warning' put in place on Friday afternoon it failed to stop a large crowd from braving the conditions and cheering their sides on. Despite the treacherous weather, Raheens were clinical on front of goal and they could have finished with a much wider margin of victory had it not been for a string of fine saves from Clogherinkoe goalkeeper Simon McNevin. The early exchanges were much more evenly contested than the remainder of the game, with the scores level at 0-2 each after 10 minutes thanks to points from Graham Waters an Noel Byrne for Raheens being cancelled out by efforts from Dylan Kane and Cein McMonagle. The eventual winners then hit five points on the trot to open up real daylight between the sides. A trio of frees from Byrne put them in a commanding position before David Malone had a powerful goal-bound effort expertly parried over the bar by McNevin. David Fitzpatrick curled over a beautiful point from the right wing soon after and it was obvious Clogher' were in trouble. A free from McMonagle signalled the end of Raheens' purple patch but Byrne finished the half's scoring with a fine effort from long range to leave the half-time score at 0-8 to 0-3. Clogherinkoe started the second-half in good stead, with a score from Daniel Grehan pointing from close range to cut the deficit. McNevin was then called into action once more, having to deny Colin Malone twice in quick succession with a pair of excellent saves to keep his side in the game. Fitzpatrick and Jason Earley pointed for Raheens to further stretch the lead, before Clogher's woes were worsened with the dismissal of Tommy Reilly on 40 minutes. The tie was eventually put to rest soon after when McNevin unluckily fumbled a long ball, with Byrne following in and sweeping the leather into an empty net. Clogher' launched an admirable late comeback that never truthfully looked like bearing any fruit, but some of the points they picked off were excellent, with Jack Robinson leading the charge from corner-forward. It was Robinson who nabbed the first of their four point salvo, before a brace of McMonagle frees was supplemented by a Mark Nolan score. During that burst of scoring Raheens only managed a point through the free-taking accuracy of Byrne. A point from Liam Power and David Fitzpatrick's third score of the night for Raheens spelled the end of Clogher's fightback, and although they managed to net a goal through a Kieran Grehan penalty, they never looked like they would claw their way back into the tie. Gavin Scanlon was shown a second yellow in injury time to compound the misery on Clogher as they ended the game with 13 men. Raheens substitute Ross McMahon had the final say, as he sailed over the final score of the evening deep into injury time to ensure Raheens' championship journey will continue. Scorers for Raheens: N Byrne (1-6,5f), D Fitzpatrick(0-3), J Earley, G Waters, L Power, D Malone, R McMahon 0-1 each. Scorers for Clogherinkoe: C McMonagle (0-4,4f), K Grehan(1-0pen), J Robinson, D Kane, D Hanley, M Nolan and D Grehan 0-1 each. Raheens S Power; C Conlan, T Early, J Lawler; G Byrne, C Earley, J Earley; L Power, D Fitzpatrick; D Malone, R Hannick, G Waters; C Malone, J Jennings, N Byrne. Subs used: T Dore, D Campbell and R McMahon. Clogherinkoe S McNevin; C Grehan, S McEvoy, D Lowry; G Scanlon, J Mulreaney, M O'Rourke; D Pyke, D Grehan; D Kane, T Reilly, R Dunne; J Robinson, C McMonagle, M Nolan. Subs used: K Wilkinson, K Grehan and D Hanley.
ADVERTISEMENT
Advertise with Us
ADVERTISEMENT
Advertise with Us