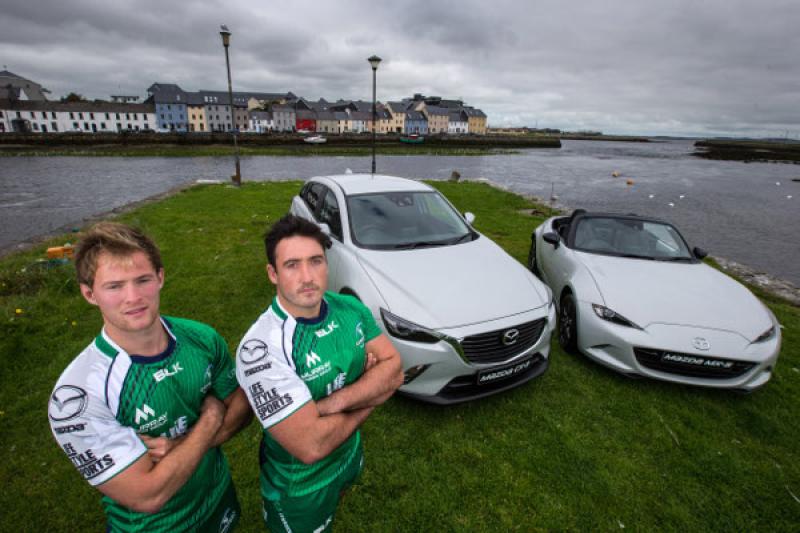 While the focus may be on Cardiff this weekend, and Ireland creating history by securing their first ever Rugby World Cup semi-final berth, the new generation of rugby players will be busy going through their paces in Carton House on Saturday morning. The Mazda Rugby Roadshow is a unique event that allows young rugby players to meet some of Ireland's best up and coming stars, with Kieran Marmion and Denis Buckley giving coaching tips to the youngsters throughout the day. The aim is to promote the sport in an enjoyable environment that will also increase the skills levels of the players taking part. It's not just the kids that enjoy it either, Connacht prop Denis Buckley gets a kick out of it too. "We did one in Cork recently and it was good fun. Basically we go up and we meet the kids from all the different clubs around the place and we get to do a few different drills with each of the groups. We kind of take one at a time and other groups will go off and play games against each other and they’d all kind of rotate around. We’re there for a good few hours and it’s god to help educate some of the younger rugby players in Ireland and give them a tip or two", he said. While Buckley's main job on the pitch is to hold up the scrum from the loosehead position, he admits that he can't pass too much knowledge onto the youngsters on that aspect of the game as they don't encounter proper scrummaging until they are much older. "They don’t really scrummage at under 12 level. We didn’t really get into that the last day but certainly any advice I can give to the ones that ask, I will. In terms of actual coaching of scrums and that there wouldn’t be anything like that. It’s just going to be some of the basic skills like tackling, passing, breakdown stuff and we’ll try and make it a bit fun for them", he said. Connacht scrumhalf Kieran Marmion will also pass on his wisdom, and he is keen to help the young players to get to grips with the basics of the game, so they have the foundations to help them become better players in the future. "Well basically we’re just going to run a few drills and throw a few balls around with them. It was pretty enjoyable down in Cork, maybe just give them a few tips and hopefully they enjoy the day really." "Mainly stuff around the basics of the game. I’ll be giving them tips on stuff like passing and catching and those kind of things that will lead onto the bigger things that they will come into when they get a bit older", he said. If you're a parent that would like to bring their child to the event but you're not too enthusiastic about the idea of hanging around Carton House for a few hours, don't worry, there will be a fleet of sixth generation Mazda cars that the parents can test drive throughout the day to keep them busy.
ADVERTISEMENT
Advertise with Us
ADVERTISEMENT
Advertise with Us