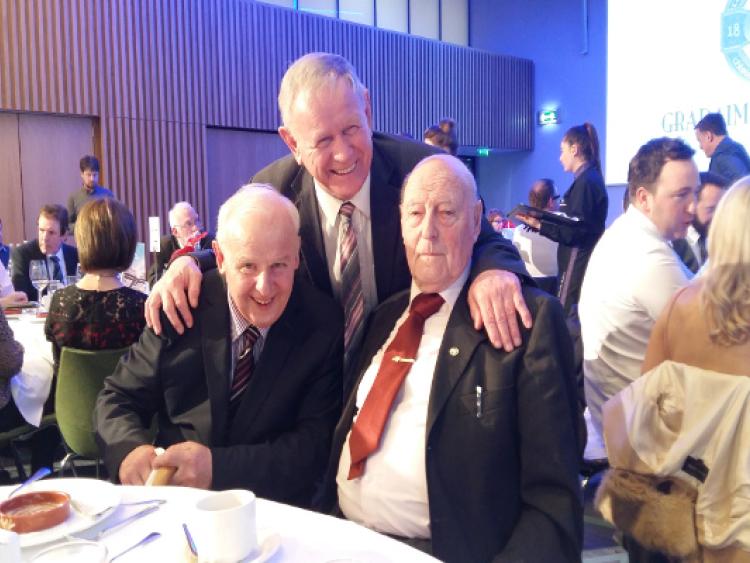 33 years after winning a world title in handball, Ballymore Eustace great Matt Purcell has been honoured for his contribution towards handball over the last 60 years. Purcell, who is pictured above with St Laurence's GAA stalwart John Joe Walsh and Jim Clarke, a member of the 1953 Senior Championship winning Ballymore Eustace team, began playing with the Ballymore Eustace Handball Club in 1958 and won many major titles throughout a fruitful career, culminating in the World Masters 40x20 doubles win in Croke Park when he teamed up with Pat Kirby in 1984. Following on from his retirement he has held administrative roles at club and provincial level, and he has been honoured with the GAA President’s Award for dedication to handball. Presented with his accolade at a special banquet on Friday night, Ballymore Eustace Handball Club congratulated Purcell heartily on his deserving award, the 2017 Handball Award from GAA President Aogán Ó Fearghail. “This prestigious award is richly deserved for his enormous contribution to the game both as player, administrator, writer and historian” said Ollie Deegan on behalf of the club. “Well done Matt. Not only a great personal honour but one in which club, village and county will bask in reflected glory. An comhgeardeas leat!” “I enjoyed  the awards function enormously” said Matt who was delighted that fellow handball club members Eamonn Deegan, Jim Clarke and John Brown all took the trouble to attend with good wishes and texts received in abundance on the day. “Highlights for me was meeting fellow Aaward winner the great Derry footballer Jim McKeever.  I also met Davy Dalton whom I had not seen since meeting him in Capetown nearly 20 years ago.  Davy in his day was a great Kildare football player with a provincial senior medal or perhaps two to his credit. St Laurence's club man John Joe Walsh congratulated me on the Award, as did a number of other GAA figures”. Matt also received a gold tie pin as a momento of the occasion.