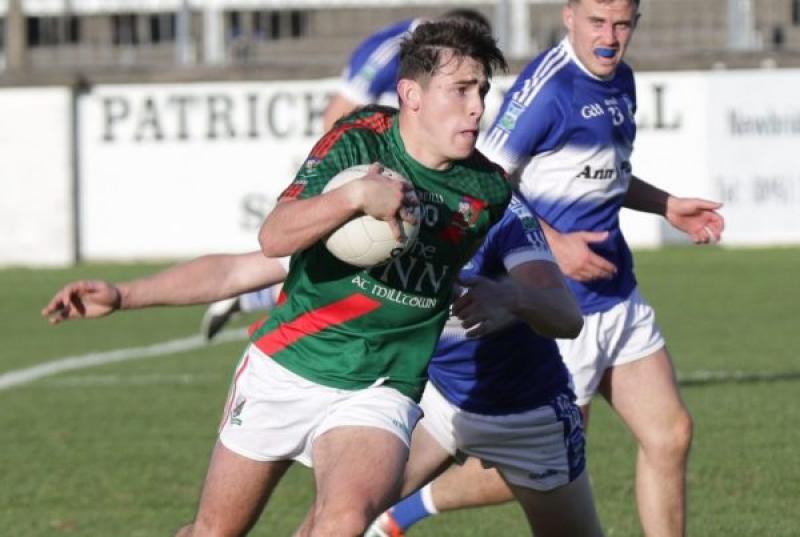 Milltown 1-12 Kilcoole (Wicklow) 0-11 Leinster JFC preliminary round A late penalty goal from captain Colin O’Shea helped Milltown edge by Kilcoole and into the last eight of the Leinster Junior Football Championship on Saturday afternoon. The Kildare junior champions were pushed all the way in what was a see-saw battle against their Wicklow opponents, but it was O’Shea’s last gasp goal that sealed the victory for his side that sets up a quarter-final tie with Carlow side Myshall on Sunday November 10. There were large spells of this game where Milltown threatened to ease towards victory as they led by five points midway through the first half before being pegged back, while they also opened up a seven-point gap with just 10 minutes to go before Kilcoole rallied and set up a grandstand finish. Their early lead was built up gradually over the first quarter of an hour as Rob Scully, Morgan Owen and Omar Dunne all hit the target from play before Alan Dignam slotted over two points from frees to establish a five-point advantage. It took Kilcoole all of 18 minutes to finally break their duck, with Cormac Byrne getting them off the mark. They hit a nice purple patch then as Lee Dutton and Matt Gilbert raised further white flags, before a brilliant score from Vinny Quigley cut the gap to one point. Milltown finished the half out well as Kevin Dowling and Ronan O’Shea landed a couple of scores to leave the Kildare men with a 0-7 to 0-4 advantage at the turnaround. The visiting side really cut loose in the third quarter after the restart, outscoring the Wicklow champions by 0-5 to 0-1 as they laid the foundations for victory. Dignam started their good spell with a point from play, which was cancelled out by Gilbert, but further scores from Dignam and Ronan O’Shea had them well in command. Dowling added his second of the afternoon and Wayne Dignam split the posts for Milltown as they looked destined for the win, but Kilcoole got their second wind to make a real game of it in the final 10 minutes. A Danny Kavanagh point was followed by a couple of scores from Byrne, before Declan Roper left just three points between the sides with five minutes left to play. Byrne and Kavanagh then hit a point each as the gap was cut to the minimum as the game edged towards injury time, and it seemed like Kilcoole held all the momentum. Milltown summoned one last push however, and O’Shea’s late penalty was enough to seal the win and ensure that his side’s first outing in the Leinster Championship wasn’t their last. They will also have home advantage when they play Myshall in two weeks’ time.
ADVERTISEMENT - CONTINUE READING BELOW