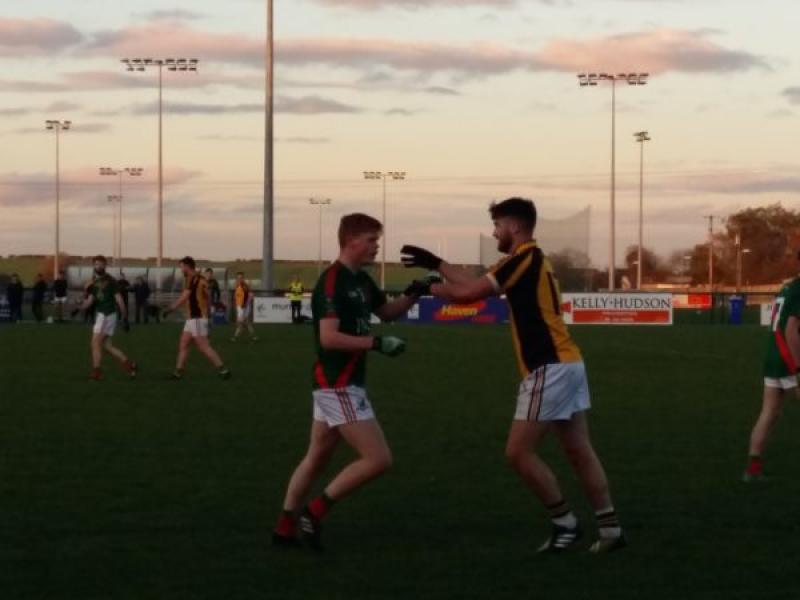 Milltown 1-8 Naomh Eoin (Carlow) 1-7 Leinster Club JFC quarter-final The story of this game will likely be recounted around the Milltown club for years to come after the Kildare junior champions somewhat implausibly grinded out the narrowest of wins over Carlow's Naomh Eoin. The green and red finished the game with 13 men following sending offs for Alan Dignam and Cian Buckley, while captain Colin O'Shea went on a black card, but it mattered little in the end as Ronan O'Shea kicked over a last gasp free to settle the tie. O'Shea's opportunity arrived after man of the match Kevin Byrne had won a free following a storming run through the middle, and the young defender also helped make a huge turnover in defence after that as Naomh Eoin piled forward in search of an equalising score. It spared his side's blushes to a certain extent as they were hugely wasteful on front of goal in a game they generally commanded,  but they won't care as they now have a Leinster semi-final to prepare for. Milltown enjoyed plenty of early dominance in the opening quarter but their inaccuracy in front of goal was costing them. They should have been well clear during the middle stages of the first half, but a tally of seven wides in the first 15 minutes allowed Naomh Eoin to break into an early lead. It was the home side who were first off the mark however, with Morgan Owens slipping through the Carlow side’s defence to thunder a powerful effort towards goal that had to be acrobatically deflected over the bar by goalkeeper Ronan Nolan. They began to hit their succession of wides following that score however, and the visiting side plundered 1-2 in the next eight minutes to take control. The lively Cillian McCabe hit their first score as his shot from around 35 metres out crept just over the bar, and his second point was remarkably similar five minutes later. In the ninth minute they made their breakthrough as Anthony Hogan carried the ball towards goal and drove a low shot to the back of the net that just about got past Milltown ‘keeper Paul Mulhall who got a hand to his effort. The red and green responded with a fine point as Colin O’Shea broke up the field to set up older brother Ronan to fist over from close range, and Alan Dignam followed that up five minutes later when he excellently pointed from distance. Things finally clicked for Declan Brennan’s side in the 25 th minute when Morgan Owens carried the ball up the right wing and showed superb vision to drop a pass over the head of Naomh Eoin defender Shane Cranny for Robbie Scully to run on to, and the corner-forward angled a pinpoint shot across goal and into the far corner of the net. Despite having numerous opportunities to build on their lead, Milltown entered the half-time break just a point clear as they led by 1-3 to 1-2 at the turnaround. Naomh Eoin manager Tom Quirke really shuffled his deck at the break by bringing on a trio of subs, with Ross Smithers, Martin Doyle and Martin Crowly all entering the fray, but it was one of their standout performers from the first half who made an early impact as Dwain Kavanagh landed a superb score within a minute of the restart. Milltown were continuing to kick some worrying wides from really presentable chances, but they finally nudged back in front in the 36th minute when Dignam knocked over a free. That seemed to calm the nerves somewhat, and they kicked another three points over the next six minutes to assume control. Scully delivered the goods with a brilliant point from long range, before midfielder Eoghan O'Toole split the posts with a great score soon after. When Ronan O'Shea kicked his side four clear it looked like they would pull clear and surge towards victory, but their wayward shooting returned and Naomh Eoin upped it a gear at the other end. Donal Smithers cut the gap to three by knocking over a point from a free, before Milltown were dealt a big blow when captain Colin O'Shea was black carded for tripping Ross Smithers, and it all went downhill from there. Donal Smithers narrowed the gap to one by pointing from two placed balls in a row, before Milltown saw two men sent off in 30 seconds when Alan Dignam was shown a second yellow card and Cian Buckley received a straight red for something he said to referee Patrick Coyle. When Smithers levelled the game it looked like the Carlow men would go on to find a winner, but as the game tipped into added time Byrne drove through the middle and won a free that O'Shea slotted over to give his side a famous win. Scorers for Milltown: R Scully 1-1, R O'Shea 0-3(1f), A Dignam 0-2(1f), E O'Toole and M Owens 0-1 each. Scorers for Naomh Eoin: D Smithers 0-3f, A Hogan 1-0, C McCabe 0-2, D Kavanagh and C Foley 0-1 each. Milltown  Paul Mulhall; Jamie Cross, Kevin Byrne, Eoin Dowling; Cian Buckley, Colin O'Shea, James Condon; Omar Dunne, Eoghan O'Toole; Morgan Owens, Kevin Dowling, Alan Dignam; Robbie Scully, Ronan O'Shea, Wayne Dignam. Subs used: Mick Colleton for C O'Shea BC 48mins, Sean Tiernan for W Dignam 57mins. Naomh Eoin Ronan Nolan; Shane Cranny, Shane Kavanagh, Michael Mullins; Tommy Nolan, Philip Smithers, James O'Hara; Kevin Foley, John Michael Nolan; Conor Foley, Dwain Kavanagh, Anthony Hogan; Donal Smithers, Eanna Kavanagh, Cillian McCabe. Subs used: Ross Smithers for Foley HT, Martin Doyle for Hogan HT, Martin Clowry for E Kavanagh HT.
ADVERTISEMENT - CONTINUE READING BELOW