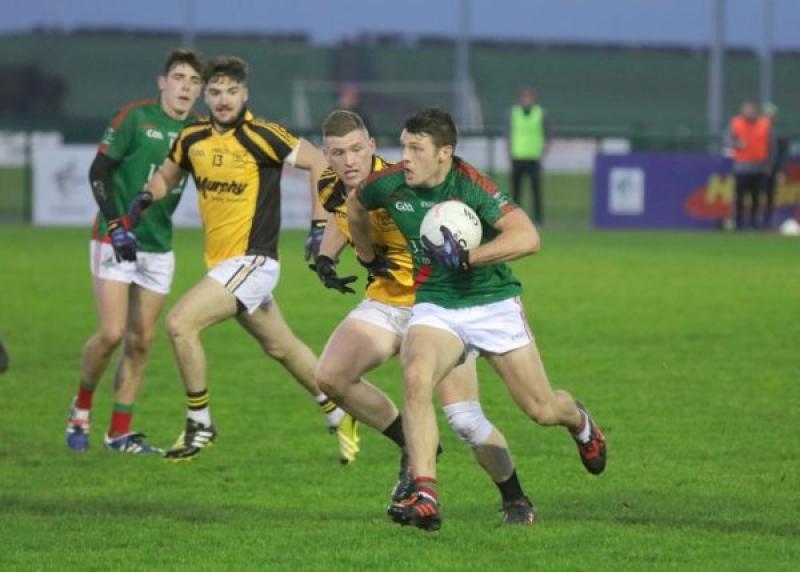 St Brigid's 1-11 Milltown 1-7 Leinster JFC semi-final By Robert Cribbin Milltown’s odyssey in the Leinster Junior Football Championship is at an end after they fell to a four point defeat at the hands of St Brigid's of Offaly. It all looked so promising for Milltown when they led at the break by a point with a Morgan Owens goal setting them up but St Brigid's were much the better side in the second period and they powered clear. A purple patch halfway through the second half where the Offaly side scored five points on the bounce proved crucial in the win with David Egan having a huge impact. Milltown will look back with a bit of regret on a missed opportunity but it was St Brigid's day. Milltown started off well with Wayne Dignam kicking the game’s opening score in the 2 nd minute when he found the target from a difficult angle. The lead was very brief however as St Brigid's battled back and they found the net only four minutes later with wing forward Thomas Mooney storming downfield and with the goal at his mercy he rounded Paul Mulhall in the Milltown goal and while he looked to be fouled he still found a way to bundle the ball into the empty net. Milltown got on a lot of ball afterwards but in similar fashion to the quarter-final victory over Naomh Eoin, the Kildare side proved to be very wasteful in front of goal as they kicked three consecutive wides. Mooney was proving a big threat for St Brigid's and he soon extended the lead with a lovely score on the run before it became a four point advantage with Cian Donoghue scoring in space as they went into a 1-2 to 0-1 lead. Alan Dignam settled Milltown with a well taken free from range but again the Offaly club responded with David Egan finding the target with a pulled on volley although with a little more composure it could have been a goal. Milltown didn’t fret though with captain Colin O’Shea reducing the lead to three once more with a nice score while Morgan Owens found the net in the 21 st minute on the back of a Ronan O’Shea inside pass. That left the sides all square but it was the hosts who went into the break on top as Robbie Scully found the range as Milltown ran into a 1-4 to 1-3 lead. Milltown’s superiority did not last very long as a fisted point from Bob Troy brought the teams level in the opening minute of the second half. Milltown were fortunately able to kick on again in response though as Ronan O’Shea kicked his opening score when linking up with brother Colin while Omar Dunne also found the target from out the field as Declan Brennan’s men moved 1-6 to 1-4 clear. Ronan O’Shea had a chance to extend that lead but he missed what looked a routine free and they were punished severely as St Brigid's got scores from David Egan and Bob Troy to level up the game. Egan then powered the Offaly champions clear as he kicked three consecutive frees as they opened up a good advantage in leading 1-9 to 1-6 entering the final few minutes. Alan Dignam replied with his second free but again Brigid's were able to maintain the three point buffer with a score from Eddie Grogan. Milltown tried everything to force a goal late on but it wasn’t to be and Egan kicked his sixth point of the game down the other end as St Brigid's qualified for the Leinster Final after a four point success.   Scorers for St Brigid's: D Egan 0-6 (0-4fs), T Mooney 1-1, B Troy 0-2, C Donoghue 0-1, E Grogan 0-1 Scorers for Milltown: M Owens 1-0, A Dignam 0-2 (0-2fs), C O’Shea, O Dunne, R O’Shea, R Scully and W Dignam 0-1 .   St Brigid's Liam Fox; Ger Hannon, Alan Kennedy, Willie Molloy; Liam Cocoman, Shay Hannon, Rob Hoey; Cian Donoghue, Dan Molloy; Thomas Mooney, David Egan, Sean Og Cocoman; Bob Troy, Alan Scally, Eunan Lawlor. Subs used: Joe Quinn for G.Hannon h-t, Eddie Grogan for Lawlor 52 mins,  David Boland for S. Hannon 52 mins. Milltown Paul Mulhall; Jamie Cross, Kevin Byrne, Eoin Dowling; Morgan Owens, Colin O’Shea, James Condon; Omar Dunne, Eoghan O’Toole; Alan Dignam, Kevin Dowling, Cian Buckley; Wayne Dignam, Ronan O’Shea, Robert Scully. Subs used: John O’Reilly for Scully 60 mins, Eddie Owens for Cross 60 mins.
ADVERTISEMENT - CONTINUE READING BELOW