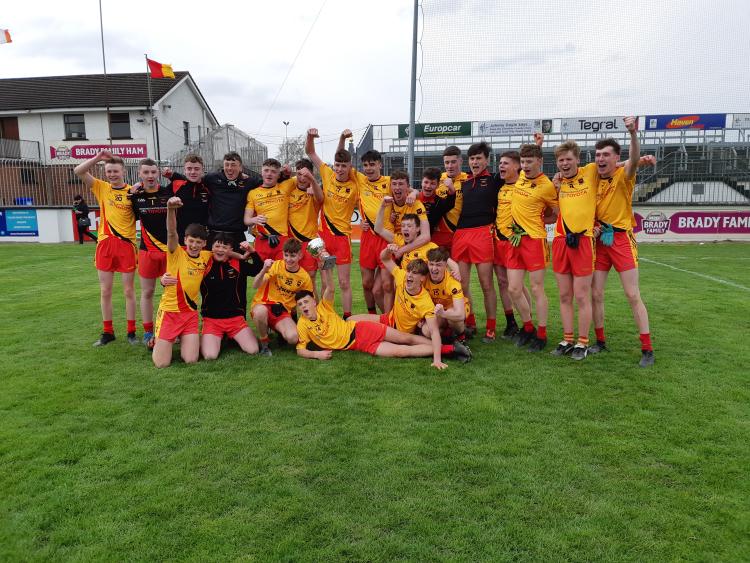 St.Laurences 0-11 Clane 1-6 Minor Football League Division 1 Final Injury time points from Alex Mackey and Kevin Eustace were enough to give St.Laurences victory over Clane in a tightly fought Division 1 Minor Football League Final. The game was a repeat of the 2018 Under 17 Final and like that day St.Laurences found a way to win even if it took till stoppage time to confirm it. A controversial first half goal looked to have set Clane up for victory but they failed to score in the second half and against a talented St.Laurences side that was never going to be enough with the loss of Sam Reilly who was unavailable proving crucial. Felix Lawler was lethal on the frees for St.Laurences and the six points from the captain played no small part in the winners making up for an earlier defeat to Clane. In a tight and tactical Minor League Final it was St.Laurences under the tutelage of former Kildare star Padraig O’Neill who opened the scoring with a Felix Lawler free. Clane who were unbeaten during the Regulation League replied with a Mark Kelly score from distance but the Larries maintained their early advantage with another Lawler free. Clane then began to take control and they were level at 0-2 apiece with a Cian Shanahan point before they took the lead for the first time courtesy of a Mark Kelly free. John Lynch also had a chance for goal during this period but despite the centre back storming upfield his effort was well saved wide by Daniel Glancy with Kelly converting the subsequent 45. Larries then had a goal chance of their own but after Kevin Eustace found space and released Lawler the forward was out of luck as a Clane defender came in to avert the danger. Lawler and Kelly duly shared frees but a fine effort from distance by PJ Cullen brought Larries back to within a point. The main incident of the game arrived in the 29 th minute when a Mark Kelly 45 looked to be dropping short and it skimmed off the fingers of Kevin Eustace towards the goal and it was debatable whether it crossed the line with both umpires putting across their point of view but eventually referee Frank Delaney intervened and a goal was awarded to give Clane a four point buffer. Inside forward Dean O’Shea followed up that goal with a point on the turn and Clane went into the break with a 1-6 to 0-4 lead. Clane had the aid of a stiff enough breeze blowing into the Town end of St.Conleths Park during the opening half and with the elements at their back St.Laurences kicked the opening two points of the second half with Lawler and Kevin Eustace on target. Aaron Kennedy was pretty quiet up to that point but he soon burst into the game when broke onto a pass and shot for goal but his attempt deflected wide off Sam Hilliard and the Laurences star can count himself somewhat fortunate to have stayed on the field as he seemed to come into contact via the foot with Hilliard after the shot took place and Hilliard had to go off with a suspected concussion. Laurences were much the better side though and a Lawler free brought the deficit back to just two points entering the final quarter. Clane had chances to seal it but Aaron Connolly, Dean O’Shea and Eoin Twohig all wasted a couple of opportunities to give them a bit of breathing space. Even still Clane had that two point lead until Harry Kirwan converted a 45 three minutes from the end and from there it was a huge Laurences onslaught. A Lawler free two minutes into injury time looked to have sealed extra-time but the Narraghmore based outfit were having none of that and Kevin Eustace and Alex Mackey kicked points in the dying stages as St.Laurences took home the League title. St.Laurences: Daniel Glancy; Robbie Allen, Ciaran Sullivan, Dean Warren, Michael Cassidy, Luke Gorman, Conor Perse, PJ Cullen 0-1, Kevin Eustace 0-2, Harry Kirwan 0-1 (0-1 45), Aaron Kennedy, Callum McElhinney, Alex Mackey 0-1, Felix Lawler 0-6 (0-6fs), Adam Griffith. Subs used: Stephen Kavanagh for Cassidy 38 mins, Colm McMahon for Allen 48 mins, Rory Clarke for Griffith 58 mins, Padraig Doolin for Warren 62 mins. Clane: Cian Burke; Donal Donovan, Sean Connolly, Sam Hilliard, Cian Shanahan 0-1, John Lynch, Evan Kelly, Rob Davitt, Danny Vaughan 0-1, Eoin Twohig, Aaron Connolly, Mark Kelly 0-2 (0-2fs), Dean O’Shea 0-2 (0-1f) Adam Fanning, Cormac Vizzard. Subs used: Oisin Tighe for Vizzard 17 mins, Ger Darcy for Hilliard 45 mins, Harry O’Neill for E.Kelly 50 mins, Kyle Grehan for Fanning 55 mins, Mark Gorman for Davitt 60 mins. Ref; Frank Delaney