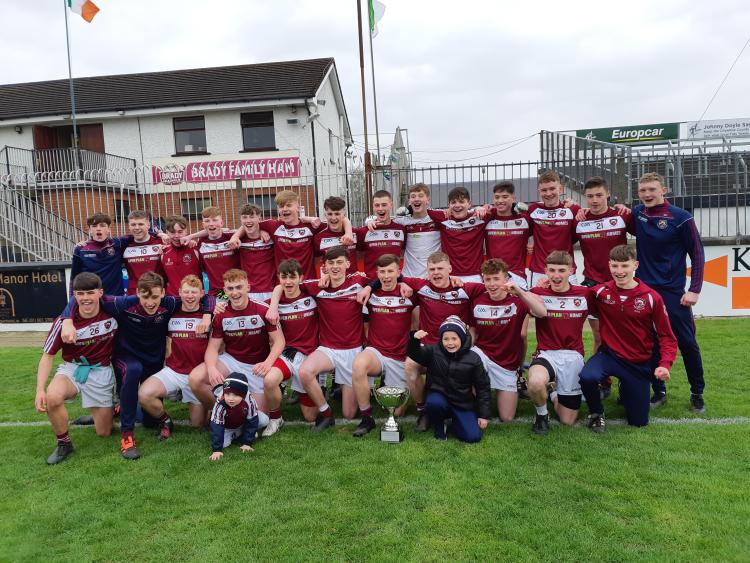 Leixlip 3-9 Sallins 0-13 Minor Football League Division 2 Final Ciaran Silke was the Leixlip hero as he scored three goals in helping his side to victory over Sallins in the Division 2 Minor Football League Final. It was a tightly fought game all the way through but Leixlip’s goals gave them the edge and as a result they ran out thoroughly deserved winners. Silke was on fire for Leixlip but as well as him both Ben Travers and Darragh Melville scored heavily as their more fluent attack proved too hot to handle for Sallins. In similar fashion to the Division 1 Final this contest was a repeat of the under 17 decider at the back end of 2018 and like that day it proved to be a cracking game where Sallins opened the scoring via a Lee Baldwin point. Leixlip replied with a score from the impressive Darragh Melville but Sallins then put on a bit of spurt to go three points clear with efforts from Baldwin, James Dalton and Darragh Mangan all hitting the target. Leixlip then got the opening goal of the game in the 9 th minute where a flowing move saw Melville give an incisive pass to Ciaran Silke and the midfielder made no mistake in firing a shot past Ryan Herbert in the Sallins goal. Daniel Caulfield kicked a pair from great points from play on the back of Leixlip scores from Ben Travers and Sean Englishby that had the teams deadlocked at 0-6 to 1-3. Both sides also had goal chances that went abegging with Sallins having a couple of efforts well blocked while Leixlip were out of luck when a Melville attempt was stopped near the line before a scramble resulted that ended with Sallins keeper Ryan Herbert gathering the ball. Leixlip were improving the longer the half went on and Melville kicked two points from play before he was brought down for a penalty in the 25 th minute which Silke buried for his second three pointer of the game. Sallins did narrow the lead before half time though when a forceful run from Darragh Mangan resulted in him finding the target as Leixlip went into the interval with a 2-5 to 0-7 advantage. Baldwin and Conor Higgins exchanged points at the beginning of the second half before Leixlip put the game beyond all doubt with a quickfire 1-1. Melville kicked his fourth point from play in the 37 th minute and just three minutes later goal number three arrived and Silke was at it again after a free from Conor Murnaghan rebounded off the bar and Silke was the quickest to it and he fired a shot to the net. Baldwin and Murnaghan then swapped points as Leixlip maintained a 3-8 to 0-9 lead but they went out of the game in the last quarter as Sallins rallied. Baldwin kicked a pair of frees before midfielder Darragh Mangan kicked a point when going for goal which got Sallins within seven points after Ben Travers kicked a fine point near the sideline for Leixlip. That was Leixlip’s last score and although Cian Grimes and Mangan added on points it was a goal Sallins needed and they couldn’t find it as Leixlip ran out 3-9 to 0-13 winners.   Leixlip: Jack Doyle; Rory Noonan, Jack Quinn, Darragh Keating, Daithi Martin, Sean Englishby 0-1, Darragh McCarthy, Jack Casey, Ciaran Silke 3-0, Eanna Ginnety, Conor Murnaghan 0-1, Conor Higgins 0-1, Ben Travers 0-2, Darragh Melville 0-4, Adam Price. Subs used: Joe Ledwidge for Ginnety 22 mins, Neil Ryan for Melville 54 mins, Rory Flynn for McCarthy 62 mins. Sallins: Ryan Herbert; Sean Conway, Aaron Carney, Eoghan Daly, Eoin McConnon, Luke Kelly, Darren Keane, Daniel Caulfield 0-2, Darragh Mangan 0-3 (0-1f), Daniel Kane, Adam Kane, Diarmuid Mangan, Cian Grimes 0-1, Lee Baldwin 0-6 (0-5fs), James Dalton 0-1. Subs used: Adam Kelly for D.Kane h-t, Sean Cullinane for Daly 40 mins. Ref: Niall Colgan