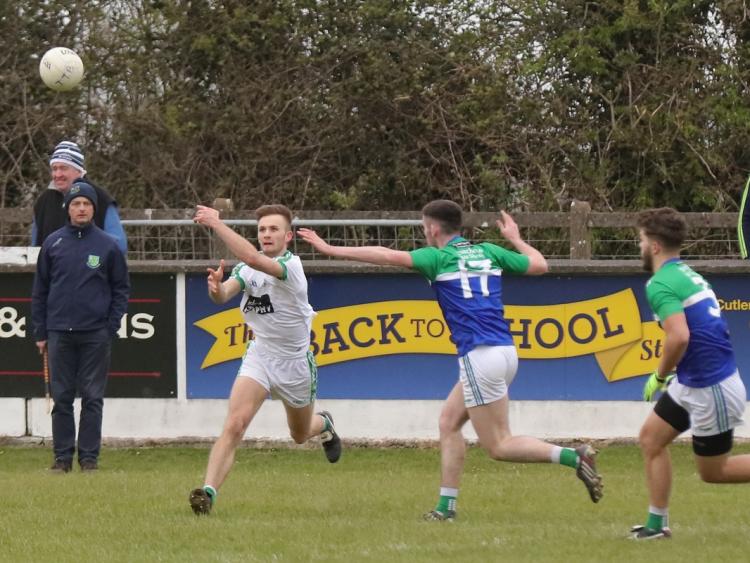 Moorefield 1-17 Johnstownbridge 2-8 Senior Football League Division 1 Moorefield maintained their 100% start to the Senior football league with victory over Johnstownbridge on Saturday Evening. The win sees the back to back County Champions continue apace at the top of Division 1 and after a slightly tetchy first period they soon took control in the second half with Eanna O’Connor kicking ten points throughout. Moorefield lined up without the injured James Murray and Adam Tyrrell but they still had more than enough firepower in their tank to see the game out. As good as Moorefield were Johnstownbridge weren’t without stars with Sam Doran having a fine game as he notched 2-2 with both goals coming in the first half but they young forward was playing a lone furrow up top. Moorefield had the aid of a very strong breeze in the first half and they opened the scoring with an Eanna O’Connor free which was soon cancelled out by an effort from Kelvin McNally. Moorefield then took command with four points in a row as a trio of frees from Eanna O’Connor were added to by a lovely score from Mark McDermott. Johnstownbridge did get a lifeline halfway through the half when Daniel Flynn brilliantly caught a long ball upfield and after beating a few men he was then fouled in the square by Liam Healy and Sam Doran clinically slotted the penalty passed Tom Kinsella. The goal didn’t unduly affect the home side though as O’Connor and Ciaran Kelly knocked over points before they themselves hit the net in the 27 th minute when  a brilliant pass from Ryan Moore went directly into the hands of O’Connor and he offloaded to Jason Phillips who supplied the finish. O’Connor got Moorefield to 1-10 before the break but their North Kildare opponents retaliated when Doran worked himself into room for his second goal and when Kelvin McNally kicked his second free there was only five points separating the sides at the break as the Moores held a 1-10 to 2-2 lead. Brian Flanagan’s Johnstownbridge side would have been pretty confident heading into the second period and it opened up with McDermott and Jimmy Farrell exchanging scores. McDermott was a real threat for Moorefield all game and he kicked his third point in the 37 th minute to give his team a six point lead and from there they turned on the turbo jets with four more points before Johnstown responded. Midfielders Ryan Moore and Aaron Masterson both kicked excellent points from distance while Phillips and O’Connor also scored as Moorefield cruised into a 1-16 to 2-3 advantage. Johnstownbridge eventually steadied the ship with a Daniel Flynn point but it was quickly cancelled out by another free from O’Connor. That O’Connor effort in the 50 th minute was Moorefield’s last score and Johnstownbridge finished well with a pair of Doran scores from play added to by a free from Kelvin McNally and a 45 from Luke Flynn but all that did was put a bit of respectability on the scoreboard as Moorefield took the six point victory.   Moorefield: Tom Kinsella; Anthony Durney, Liam Healy, Mark Dempsey, Kevin Murnaghan, Sean Healy, Adam Sweeney, Aaron Masterson 0-1, Ryan Moore 0-1, Cian O’Connor, Ciaran Kelly 0-1, Mark McDermott 0-3, Eanna O’Connor 0-10 (0-7fs, 0-2 45s), Jason Phillips 1-1, Adam Meehan. Subs used: Sean Dempsey for Meehan h-t, Ian Lonergan for McDermott 47 mins, Evan Kavanagh for Moore 50 mins, Ronan Sweeney for Phillips 55 mins, Evan O’Brien for Kelly 55 mins, Ian Dunne for A.Sweeney 60 mins. Johnstownbridge: Padraig Hurley; James O’Connor, Joey Higgins, Mark Newman, Aidan Higgins, Seamus McNally, Shane Flanagan, Luke Flynn 0-1 (0-1 45), Daniel Flynn 0-1, Johnny Doyle, Sam Doran 2-2, Glen Doran, Jimmy Farrell 0-1, Kelvin McNally 0-3 (0-2fs), Eoin O’Donoghue. Subs used: Jack Morrin for Doyle 40 mins, Ashley Langan for Flanagan 50 mins. Ref: Liam Herbert