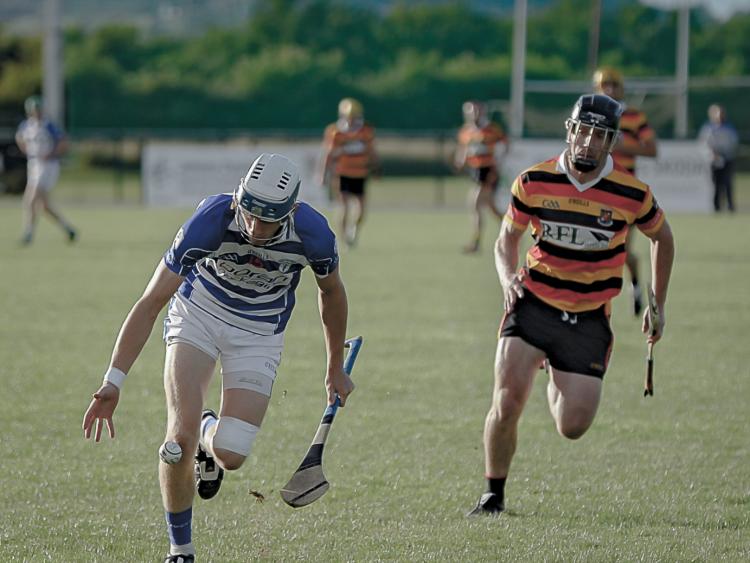 Naas 3-29 Coill Dubh 0-12 Senior Hurling Championship Preliminary Round It was as easy as the scoreboard suggests as Naas easily got the better of Coill Dubh in a rather forgettable Senior Hurling Championship game. From the moment Shane Ryan gave Naas a 9 th minute lead the Championship favourites never looked back in a dominant display. Shane Ryan, Cathal Dowling and Ross Kelly got Naas’s goals and with Jack Sheridan and Conor Dowling also scoring heavily the result was never in doubt as the County Town aim to win their first Title in seventeen years. The game was so one sided that Coill Dubh’s Mark Delaney did the majority of their scoring while they only had one point from play up till the 58 th minute and manager John Byrne will have to do a good bit of work to rebuild the confidence after such a heavy beating. Mark Delaney knocked over a pair of frees to give Coill Dubh an early lead but Naas soon hit back with a point from Conor Dowling. Naas then kicked on with points from Shane Ryan, Brian Byrne and Ross Kelly giving them a 0-5 to 0-2 lead approaching the halfway mark of the half. Delaney briefly narrowed the gap but it was from here that Naas really went into overdrive with five points in a row. Ryan, Phillip Cocoman and Jack Sheridan were all on target as Naas moved into a 0-10 to 0-3 lead. Ryan Casey knocked over Coill Dubh’s first point from play in the 20 th minute on the back of a Delaney free but all it did was keep them somewhat in touch and that option soon wasn’t there with Naas finally finding the net courtesy of Shane Ryan after great build up play by the Dowling brothers Conor and Cathal. Shane Broderick duly followed up with his first point from midfield with Cocoman and Conor Dowling also on target on the back of Jack Sheridan knocking over a trio of scores including a beautiful sideline cut. Ross Kelly kicked in a stoppage time goal and although Delaney replied with a free the game was well over by the half-time whistle with Naas leading 2-16 to 0-6. The teams shared the first few scores of the second half with Naas points from the Dowling’s and Sheridan cancelled out by a pair of Delaney frees. Coill Dubh were way off the pace though as Naas looked the much sharper team and they soon had their third goal when Conor Dowling had a ball on the wing and his pass in towards the square was caught by his namesake Conor and despite mishitting the shot it still bounced passed Owen Lenehan in the Coill Dubh goal. Naas didn’t look back from there with a couple of Byrne frees added to by scores from James Burke, Cathal Dowling and another sideline from Sheridan. Coill Dubh did register a bit of a gallop before the end with scores from play by Delaney and Ruairi Hayden but Naas were in a world of their own and they rounded off the game with Sheridan, Burke and Conor Dowling all on target to give them a huge victory on a 3-29 to 0-12 scoreline.   Naas: Cormac Gallagher, Paul Sullivan, Richard Hogan, Kieran Maher, Shane Walsh, Rian Boran, Simon Leacy, Brian Byrne 0-4 (0-4fs), Shane Broderick 0-1, Phillip Cocoman 0-3, Ross Kelly 1-1, Conor Dowling 0-4, Jack Sheridan 0-8, Cathal Dowling 1-3, Shane Ryan 1-3. Subs used: John Gorman for Walsh 42 mins, James Burke 0-2 for Ryan 44 mins, Mark Nevin for Cocoman 49 mins. Coill Dubh: Owen Lenehan; Conor Gordon, Mark Grace, Ronan Guilfoyle, Mark Byrne, Ross Carew, Dylan Brereton, Jonathan Byrne, Barry Mullins, Mark Delaney 0-10 (0-9fs), Luke O’Reilly, Ryan Casey 0-1, Jamie Kenna, Declan Flaherty, Conor Carew. Subs used: Diarmuid Cahill for Byrne 21 mins, Adrian O’Sullivan for O’Reilly h-t, Eoin Dodrill for Carew h-t, Ruairi Hayden 0-1 for Kenna h-t. Ref: Conor Daly