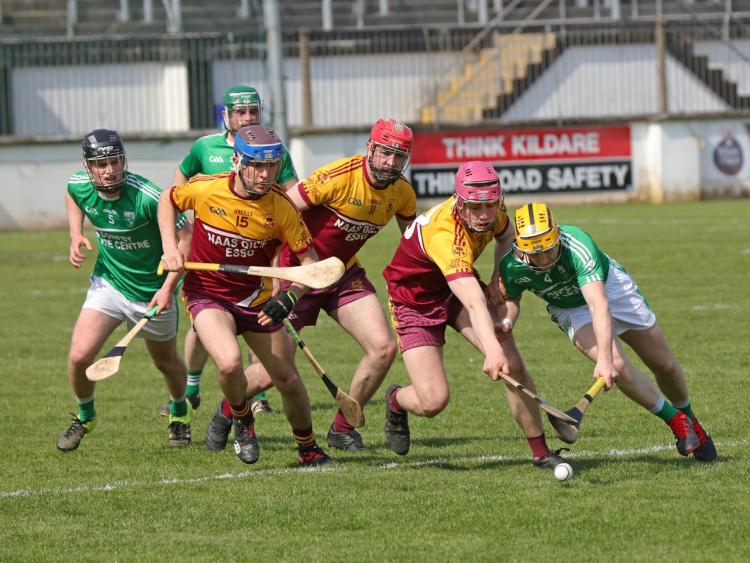 Eire Og Corrachoill 0-17 Confey 0-12 Senior Hurling Championship Preliminary Round A stirring last quarter from Eire Og Corrachoill gave them a deserved victory over Confey in the Preliminary Round of the Hurling Championship on Monday afternoon. The teams were level in the 57 th minute but Eire Og found another gear late on as they scored five points in a row to seal the victory. Indiscipline is what cost Confey in the end with wing forward Colm Chan getting sent off in the 46 th minute and from that point onwards they were outscored 0-8 to 0-2. Liam Dempsey who is a son of Joe and brother of Evan was the main marksman in attack for the winners but it was back in the defence that the platform was laid out as they shut down an impressive looking Confey attack. The fact that normal midfielder Kevin Connor was deployed in the full back line told its own story but it all worked out in the end as Confey suffered their opening defeat of the year. Confey started out the better and they took the lead within seconds of the throw-in as Frank Bass knocked over a free. Eire Og quickly replied with a Liam Dempsey score but Confey were soon back in front when Phillip Quigley brilliantly found the target despite being surrounded by a number of bodies. Eire Og then kicked on as they scored the next four points after Dempsey and Liam Power notched a brace each to go into a 0-5 to 0-2 lead. Confey responded with points from Quigley, Fiachra Lynch and Paul Divilly to level up matters. A 65 from Dempsey briefly gave Eire Og the lead again but it didn’t last long with Confey finishing the first period in better fettle as a free from Bass was followed up by two efforts from play by Colm Chan. Confey probably should have been further ahead as they hit a few careless wides but they were still content as they held an 0-8 to 0-6 lead at the interval. Confey extended the lead at the beginning of the second half with Chan converting his third point from play. The Eire Og response was instant though as they hurled over three points in a row with 19 year old Dempsey, Power and Conor Kielty all finding the target. Divilly then edged Confey back in front with a fine score from distance but it would be the last time that they would lead as just minutes later Colm Chan was sent off for an incident near the sideline where ref Niall Colgan consulted his linesman before giving the wing forward his marching orders. Eire Og briefly took advantage with points from Dempsey and Garry Johnson giving them an 0-11 to 0-10 lead but the 2018 League Champions weren’t going to go down without a fight with Bass and Eoin Lynch scoring either side of an Ollie O’Neill effort as the teams remained deadlocked. Confey eventually gassed out though as they ran out of ideas and Eire Og took full advantage. Confey didn’t score throughout the final ten minutes whereas Eire Og found a new sense of life and after Barry Cormack put them back in front with a long range free they didn’t look back. Johnson, Ollie O’Neill and Tim Hennessy also scored before Dempsey rounded off a fine individual performance as he knocked over the final score of the game to give Eire Og Corrachoill a five point victory. Eire Og Corrachoill: Paul Dermody; Cathal McGrath, Kevin Connor, Michael Begley, Niall Connolly, James Dolan, Rory O’Neill, Garry Johnson 0-2, Barry Cormack 0-1 (0-1f), Tim Hennessy 0-1, Paul Kennedy, Liam Power 0-3, Cillian Manders, Conor Kielty 0-1, Liam Dempsey 0-7 (0-2 65’s). Subs used: Ollie O’Neill 0-2 for Manders 42 mins. Confey: Shane Quinn; Sean Leamy, Paul Keegan, Paul Feerick, Cathal Jennings, Anto Hoare, Ian Baker, Paul Divilly 0-2, Eamonn McQuillan, Colm Chan 0-3, Phillip Quigley 0-2, Frank Bass 0-3 (0-3fs), Eoin Lynch 0-1, Kieran Divilly, Fiachra Lynch 0-1. Subs used: Aidan Ryan for McQuillan 53 mins. Ref; Niall Colgan