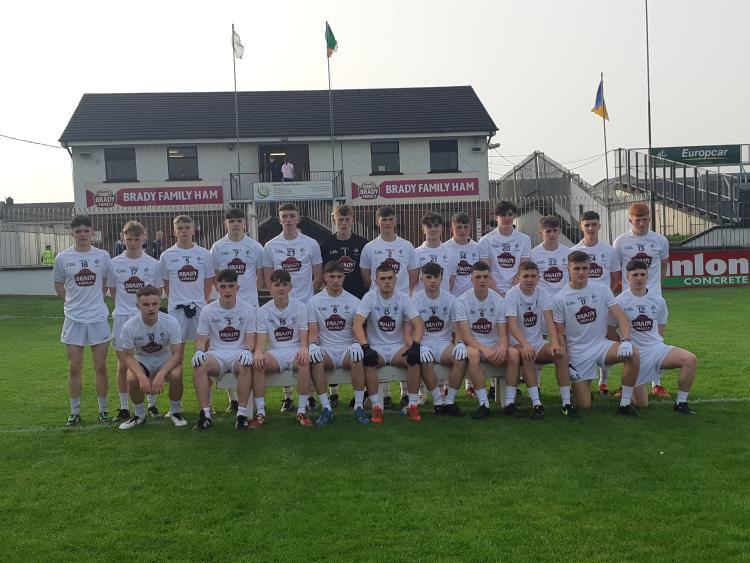 Kildare 1-16 Wicklow 0-12 Leinster Minor Football Championship Round 1 Kildare were made work for it for long periods but eventually they did enough to get over Wicklow in the opening round of the Leinster Minor Football Championship. In a tightly fought game it wasn’t until Adam Conneely kicked in a 57 th minute goal that Kildare put the seal on the seven point success. Conneely kicked 1-2 in the second half and along with Eoin Bagnall and Eoin Meehan he was part of a clinical full forward line. Clinical being the apt word as that is what Kildare were while their opponents kicked a number of wides and missed a couple of goal chances. Wicklow would have fancied themselves coming into the game with nine of the panel that lost out to Kildare in the Semi-finals of the Provincial campaign last term but it was the more inexperienced Lillywhites side that saw the result out in front of a sizeable attendance. Wicklow started the game in confident mood as Eoin Doyle converted a free after Joe Prendergast had been fouled. Kildare responded with a lovely score from Aaron Browne but Kevin O’Brien’s Wicklow outfit looked the livelier in the early minutes with another Doyle free followed up by a score from play by Bradley Hickey when he stormed through a few tackles and although he wanted a goal his shot went too high. The impressive Eoin Bagnall got his opening point in the 7 th minute from a free for Kildare before he had a goal attempt saved after he ran from deep though his shot proved pretty tame in the end. Eoin Meehan then levelled up the game when the Moorefield man curled a lovely shot between the posts after he received a pass from Johnny Owens. The teams then exchanged scores after Bagnall and Ging both shared points that left the teams level at 0-4 apiece. Wicklow were beginning to turn the screw though and they looked to have big claims for a penalty when Ging looked to have been fouled in the square but referee Chris Dwyer waved play on. Ging also shot wide during this period and after that miss the home side began to dominate around midfield and they then took the lead for the first time in the 19 th minute with an Aaron Browne score. Bagnall duly knocked over three points in a row minutes later and in the blink of an eye Colin Ward’s men opened up a four point lead. Wicklow had gone fifteen minutes without a score until Eoin Doyle knocked over a stoppage time free to narrow the deficit at the break. Kildare had a three point lead entering the second period but it was wiped out within seven minutes of the restart after a fine effort from Eoin Doyle where he produced a fabulous solo dummy to work himself into space was added to by efforts from Ging and Shane Daly. Kildare looked to be slightly on the ropes at this stage but sub Aedan Boyle edged them back in front with a score from his first touch after good build up play from Meehan and Browne. Ging responded with a free and both sides then had efforts on goal but Cillian McDonald kicked wide for Wicklow while Adam Conneely had a shot saved by Andy Nolan. Wicklow threw huge numbers into attack at different periods of the game and they were punished in the 42 nd minute when an incisive Kildare breakaway resulted in Meehan kicking a point. Ging and Tommy Gill then exchanged scores before Wicklow had a glorious chance to go ahead when McDonald got free again but Kildare goalkeeper Cian Burke stood tall to make a cracking save from the wing back. That seemed to turn the tide in Kildare’s favour as Adam Conneely kicked a quickfire brace of scores after a couple of mistakes in the Wicklow defence. Ging replied with a lovely score near the sideline but it was all Kildare in the final ten minutes as they scored 1-3 without reply. Bagnall, Browne and Jimmy O’Neill got the points while more crazy defending from Wicklow resulted in Conneely and Meehan finding room deep in the Wicklow half and after Meehan found Conneely in space he made no mistake in slotting a shot under the stricken Nolan. Ging kicked a late consolation score for Wicklow but that’s all it was as Kildare got their campaign off to the perfect start.   Kildare: Cian Burke (Clane); Ryan Comeou (Balyna), Oisin O’Rourke (Athy), Tommy Gill (Carbury) 0-1, Mark Maguire (Naas), Conan Boran (Eadestown), Jack Quinn (Leixlip), Kevin Eustace (St.Laurences), Shane Flynn (Balyna), Adam Conneely (Two Mile House) 1-2, Johnny Owens (Celbridge), Ciaran O’Brien (Kilcullen), Eoin Meehan (Moorefield) 0-2, Eoin Bagnall (Aylmer Gaels) 0-6 (0-5fs), Aaron Browne (Celbridge) 0-3. Subs used: Aedan Boyle (Balyna) 0-1 for Owens 36 mins, Oisin Milmoe (Carbury) for O’Brien 54 mins, Jimmy O’Neill (Sarsfields) 0-1 for Browne 57 mins, Luke Gorman (St.Laurences) for Meehan 61 mins. Wicklow: Andy Nolan; Daniel Healy, Sam Kearney, Jordan Brady, Daniel Cooney, Tom Moran, Cillian McDonald, Arun Daly Danne, Luka Harney, Joe Prendergast, Shane Daly 0-1, Bradley Hickey 0-1, Jack Kirwan, Matthew Ging 0-6 (0-3fs), Eoin Doyle 0-4 (0-3fs). Subs used: Eoin O’Neill for Kirwan 47 mins, Thade Shanaghan for Kearney 58 mins, Tom Keogh for Daly 58 mins, Joe Mills for Prendergast 60 mins. Ref: Chris Dwyer (Offaly)