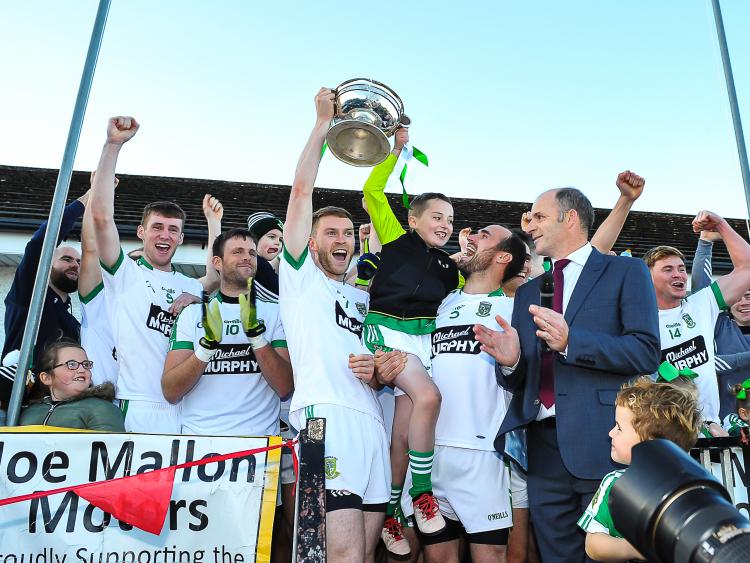 Saturday 27th April   2019 Joe Mallon Renault Senior Football Championship Preliminary Round Venue: St. Conleth’s Park, Newbridge, Moorefield V Naas, 13.00 Quite fittingly the team that are the back to back County Champions kick off the Senior Championship as they aim to win three titles in a row. The opponents are Naas in a repeat of last year’s semi-final which Moorefield won easily but one would expect this to be a bit closer. The Moores currently sit top of Division 1 in the League and they welcomed Adam Tyrrell back last weekend during their League victory over Confey. Captain James Murray sat out that game but he is expected to be fit and he may be needed as Naas have impressed over recent weeks beating the likes of Athy and Sarsfields. It’s possibly the tie of the round but with Eanna O’Connor in scintillating form the Moores can begin with a win but it could be a lot closer than many people think. Verdict: Moorefield     Venue: St. Conleth’s Park, Newbridge, Castledermot V Raheens, 14:45 In another system this Raheens and Castledermot tie would have been quite the contest but it may lose a slight bit of its edge. Castledermot were a bit of a surprise package last year and they are more than capable of causing a shock on their day. Raheens on the other hand got to last year’s knockouts despite not winning a game but they look in better form now and with the likes of Colm Power and David Fitzpatrick recently returning they can get the victory. Verdict: Raheens   Venue: St. Conleth’s Park, Newbridge, Celbridge V Maynooth, 16:30 This all North Kildare clash will see all eyes on Celbridge as Paul Curran oversees his first Championship game in charge. Celbridge have been in fine form throughout the League with their large County contingent returning recently. Kevin O’Callaghan will be a big doubt for the Hazelhatch Road club but with Paddy Brophy, Fergal Conway and Tony Archbold in fine form they can cope and while Maynooth have noticeable firepower in their ranks with the likes of Neil Flynn and Dan O’Sullivan it’s still hard to look beyond Celbridge. Verdict: Celbridge   Venue: St. Conleth’s Park, Newbridge, Clane V Eadestown, 18.15 The final game in St.Conleths Park on Saturday evening brings two teams together who went head to head only last weekend. Three quickfire goals gave Eadestown victory over Clane and they will be hopeful of repeating the trick. Sean O’Dea is in his second term as Clane boss and while he suffered a huge blow midweek with Brian McLoughlin being ruled out for the year he still has a lot of talent at his disposal. Eadestown will again depend on the Bolton’s and last week’s victory will give them plenty of confidence but Clane may just have enough in the tank to see the game out but there won’t be much in it. Verdict: Clane     Sunday 28th April   2019 Joe Mallon Renault Senior Football Championship Preliminary Round   Venue: Manguard Plus Hawkfield Pitch 1, Confey GAA V Two Mile House, 13:00 It’s a day many in Two Mile House would have not seen coming as they play their first ever Senior Championship game. Unfortunately for them however things have not gone plain sailing since their All-Ireland Intermediate Club campaign came to an end in January. They are under new management while Mark Sherry and Chris Healy are big doubts having missed last week’s league defeat against Raheens and added to that Nathan Sherry also went off injured. Confey on the other hand are in a much better place and they can give their opponents a reality check at the top level. Verdict: Confey       Venue: St. Conleth’s Park, Newbridge, Athy V Sarsfields, 14:30 - Live on TG4 The TV cameras are in town for this one and it’s a fascinating contest on paper. It will be interesting to see how Davy Burke gets on with Sarsfields but to say its proving to be a slow burner would be putting it mildly. The Sash beat Athy in the opening League game but ever since that day they have really struggled going down to defeats against Naas, Round Towers and Moorefield. Athy haven’t being blowing up trees either mind you but at this moment their stock seems to be slightly higher and while he mightn’t be available this weekend the return of Niall Kelly will be of huge benefit to them. Athy beat Sarsfields in the quarter-finals last year and they can do so again. Verdict: Athy   Venue: St. Conleth’s Park, Newbridge, Carbury V Johnstownbridge, 16:15  - Live on TG4 The seventh and final game is a West Kildare Derby as Carbury and Johnstownbridge collide. Philly Wolfe is now over Carbury and he has done a fine job in the early weeks of the season as they sit in the upper echelons of Division 1. Eoghan O’Flaherty is flying for them as he kicks points for fun and he will have to be watched closely if Johnstownbridge are to do anything. JTB may have got Daniel Flynn back but they are a team that needs everybody and that is not the case with Sean Hurley abroad and Paul Cribbin sidelined with injury. They still have plenty of talent at their disposal but there is too much if’s and but’s and the more reliable Carbury are expected to get the victory. Verdict: Carbury