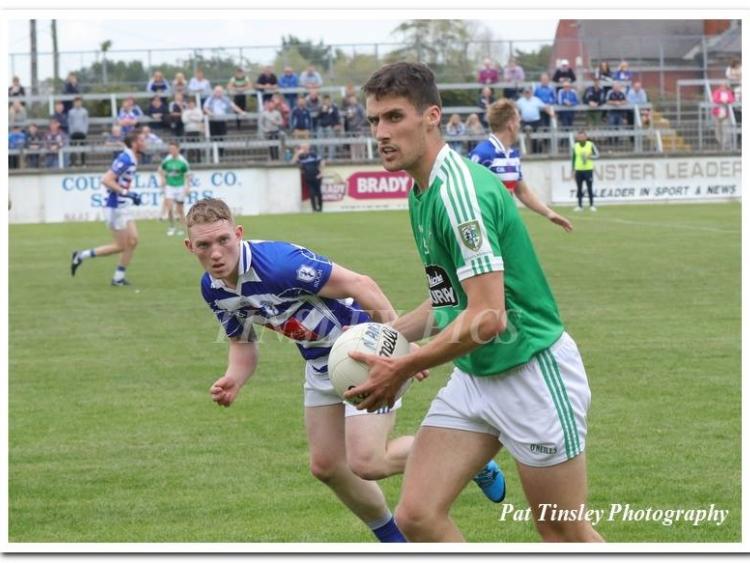 Moorefield 1-11 Naas 0-7 Senior Football Championship Round 1 It was billed as one of the ties of the round but nothing remotely close to that ever transpired as Moorefield easily got the better of Naas in St.Conleths Park. The game which was a repeat of last year’s semi-final went along similar lines to that game with Moorefield always in control. Eanna O’Cononor top scored for the victors with 1-7 and alongside Adam Tyrrell and Ciaran Kelly he was a constant threat. Niall Cronin was in his first Championship game as Naas manager and he was hampered with the loss of Eoin Doyle to a hamstring injury and his absence was keenly felt in the end. Moorefield had a huge wind behind them in the first half as the backend of Storm Hannah took its toll and they took early control  with Eanna O’Connor knocking over a free after Jason Phillips had originally being fouled. Adam Tyrrell quickly followed up with an effort from play and the defending County Champions were well clear by the 6 th minute where Tyrrell found Ciaran Kelly in space and while Kelly’s effort was well saved by Barry Reynolds, Eanna O’Connor was there to pounce on the rebound and find the net. The onslaught didn’t end there with Ross Glavin’s side keeping Naas to just a point for the entire half as the Newbridge team duly added on 1-9 without reply at a stage in a dominant performance. O’Connor kicked his second free of the half to make it 1-3 to 0-0 in the 7 th minute and with himself and Tyrrell holding a monopoly on the Moorefield scoring during the opening stanza it was looking all too easy. Tyrrell added a free himself moments later before O’Connor took full control over the game with five in a row courtesy of three 45’s, a point from play and a score from a free to give the Moores a twelve point lead. Naas responded when a shot from Darragh Kirwan dropped in the square and while John Joyce got a flick on it the Moorefield stopper Ian McDonnell did enough to keep it out. Kirwan then eventually got Naas on the scoreboard in the 29 th minute with a lovely effort but it still left Naas with plenty to do as they went into the break trailing 1-9 to 0-1. Naas put up an original spurt at the beginning of the second half with the aid of the elements with three points in a row as sub James Burke, Brian Stynes and Eamonn Callaghan all found the target. Moorefield hit back with a nice score from James Murray in the 42 nd minute after a patient move and that point seemed to settle things down for the victors and they were never in any real trouble from that point onwards. Naas needed goals and while Anthony Durney blocked well from James Buke it was the only real threat on Ian McDonnell’s goal. The teams did interchange scores halfway through the half when Callaghan and Evan O’Brien shared points but overall the second half was rather forgetful. Naas rounded off the scoring with points from David Shaw and Dallan Gallagher late on but it only put a bit of respect on the scoreboard as Moorefield cruised to victory. Moorefield: Ian McDonnell; Sean Dempsey, Liam Healy, Mark Dempsey, Kevin Murnaghan, Sean Healy, James Murray 0-1, Aaron Masterson, Adam Sweeney, Eanna O’Connor 1-7 (0-3 45, 0-2fs), Ciaran Kelly, Anthony Durney, Adam Tyrrell 0-2 (0-1f), Jason Phillips, Mark McDermott. Subs used: Eoin O’Connor for Phillips h-t, Ryan Moore for McDermott 44 mins, Evan O’Brien 0-1 for Kelly 52 mins, Liam Callaghan for Murray 59 mins. Naas: Barry Reynolds; Brian Stynes 0-1, Conor McCarthy, Adam Cronin, Paul Sullivan, Sean Cullen, Colm Joyce, Brian Kane, Brian Byrne, David Shaw 0-1, Eamonn Callaghan 0-2 (0-1f), John Joyce, Ronan Joyce, Darragh Kirwan 0-1, Luke Griffin. Subs used: James Burke 0-1 for Cullen h-t, Dallan Gallagher 0-1 for R.Joyce h-t, Fiachra Pigott for Cronin 44 mins, Phillip Cocoman for Kirwan 46 mins, Ciaran Doyle for Griffin 52 mins, Ailin McDermott for J.Joyce 55 mins. Ref: Niall Colgan