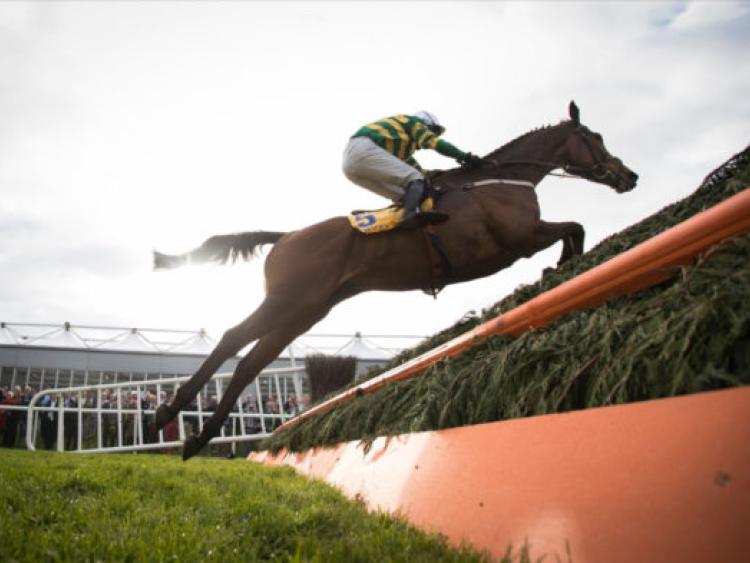 Whilst families and dog owners are out at Punchestown this afternoon walking the course and perusing the upgraded facilities at Kildare's leading jump course, real racing punters will be perusing the declarations and competition for Day  1 of the  2019 Festival.  And Willie Mullins, whose horses achieved a 1, 2, 3 and fifth place finish in the Irish Grand National this year will feature heavily on the opening day of racing.
Min and last year's winner  Un De Sceaux head the field for the Grade 1 BoylesSports Champion Chase following the feature race declarations for Tuesday, 30 April.  Willie Mullins is responsible for three of the six runners in the race with the 2017 Ryanair Novice Chase winner  Great Field also returning to action for the champion trainer.
Trainer Pat Fahy has declared his stable star  Castlegrace Paddy while Harry Fry is represented by the talented  Hell's Kitchen who was fourth in the Champion Chase at Cheltenham.  Fahy said this morning: "Castlegrace Paddy is in great form and I'm very happy he's in the race on Tuesday. The ground looks like it will be right for him."We know he has the ability but sometimes he just doesn't finish out his races and we've put a tongue-tie on him and hopefully that will make a difference. I couldn't be happier with him and Davy Russell knows him well.   Ordinary World completes the field and will be ridden by Rachael Blackmore for Henry de Bromhead. Owner JP McManus has a strong hand across the opening three Grade 1 races of the week with both Great Field and Hell's Kitchen carrying the famous colours of the Limerick native. Frank Berry, racing manager to McManus, said: "Both Great Field and Hell's Kitchen are in good form but it looks a very hot renewal of the race with Min and a few others in there. "Hell's Kitchen ran a nice race at Cheltenham and Great Field has had a very interrupted campaign for the last year but hopefully he can give a good account of himself." Supreme Novices' Hurdle winner  Klassical  Dream heads a field of six for the Herald Champion Novice Hurdle. Ruby Walsh retains the partnership with the Cheltenham hero but he'll face stiff opposition from stable companions  Aramon,  Mister Blue Sky and  Quick  Grabim. Aintree winner  Felix Desjy will attempt to give Gordon Elliott a first win in the Herald Champion Novice Hurdle. "He has come out of Aintree in great shape and we're looking forward to running him," Elliott said. "He won a Grade 2 at the track earlier in the season and he is a horse that has come good through the second half of the season so hopefully he can maintain that into Tuesday's race although Klassical Dream will take an awful lot of beating." Nicky Henderson sends over the unbeaten five-year-old  Champagne Platinumwho also runs in the McManus silks.  Frank Berry added: "This is a step up in grade for Champagne Platinum but Nicky is happy with him and it's a lovely race to have a runner in so hopefully he'll run well." The Dooley Insurance Group Champion Novice Chase has attracted an eight-strong field including the Cheltenham Festival winner  A Plus Tard. Henry de Bromhead's charge steps up to Grade 1 company for the first time to tackle the RSA Chase third  Delta Work in what promises to be one of the best novice chases in Ireland this season. Delta Work's trainer Gordon Elliott said: "It was always the plan to come back to Punchestown with Delta Work after he ran at Cheltenham. He ran well at the Punchestown Festival as a novice hurdler last year so we know he likes the track. The ground should be ideal for him and I'm hoping the can end his season on a high." Willie Mullins will look to win the race for the third time this decade when sending out  Getabird, while Welsh-based trainer Rebecca Curtis sends over  Drovers Lane.   Winter Escape was a Grade 3 winner at Punchestown earlier in the season and connections hope that the ground on Tuesday could better suit Aidan Howard's charge. "We were a bit disappointed with him in the Ryanair Gold Cup last weekend but maybe the ground was quicker than he liked," Berry said. "He has plenty to do on Tuesday as it also looks a cracking race but hopefully, he can run well. It's just nice to have horses to run in these races at the Punchestown Festival and we'll hope for a bit of luck." The ground at Punchestown is currently yielding on the Hurdle, Chase and Bumper course and good, good to firm in places on the Cross Country courses.  The 2019 Punchestown Festival gets underway on Tuesday, 30 April and runs to Saturday, 4 May. Full event and ticket information is available at  www.punchestown.com
Feature photo shows BoyleSports Champion Chase contender Great Field and Jody McGarvey jumping to victory in the 2017 Ryanair Novice Chase at the Punchestown Festival. Image: Racing Post Photos