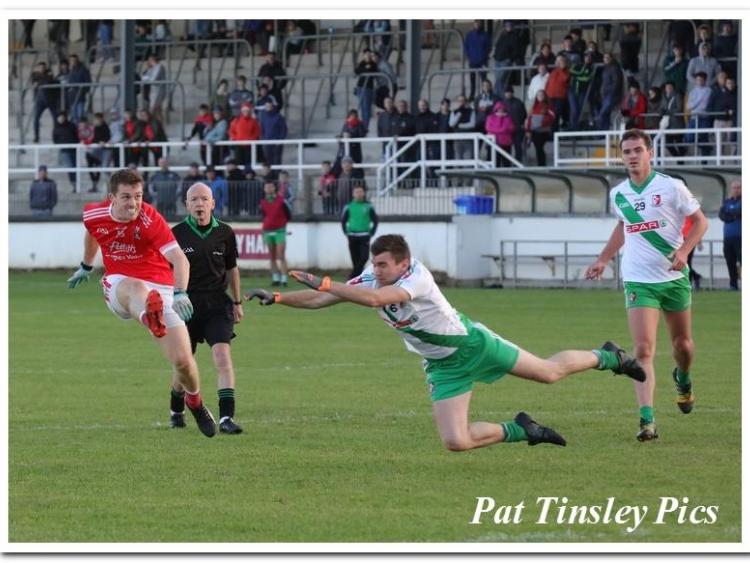 Athy 1-13 Sarsfields 0-14 Senior Football Championship Round 1 Athy and Sarsfields played out a cracking Senior Football Championship game with the South Kildare outfit narrowly getting the win. It was by far the most competitive game of the weekend and with the most quality but Athy’s extra cutting edge got them over the line. Darroch Mulhall finished with 1-3 for Athy and his opening minute goal separated the sides come the end but it was so avoidable after Cian Scanlon gave the ball away carelessly in defence. This was like the Mulhall of a couple of years ago when he was on the Kildare panel but unfortunately for him he had to go off late on with a hamstring injury. Sarsfields never led with Mulhall’s goal always giving Athy the advantage but the Sash still played their part in an intriguing contest with Barry Coffey, Darragh Ryan and the Hartley brothers all impressing. The Athy management couldn’t have dreamt of a better start with Darroch Mulhall firing in a goal in the opening minute on the back of a mistake in the Sarsfields defence. Sarsfields responded with points from Darragh Ryan and Karl Hartley who was an early sub for the injured Cian Costigan. Athy then maintained their three point lead with an outside of the boot effort from Mulhall coming on the back of a free from Liam McGovern. Barry Coffey had an excellent opening period for the Sash and he brilliantly found Conor Hartley over the top in the 18 th minute but Hartley had to settle for a point. Mulhall replied with a lovely effort on the turn before consecutive scores from Coffey off either foot left just the minimum between the sides. Athy finished the half well though as James Eaton kicked a couple of great scores either side of Mulhall and McGovern getting points. The Sash were very much still in contention come the interval though as Coffey and Hartley scored to leave just three points between the sides. The three point deficit became just one in the opening minutes of the second half with Brian McDonnell and Karl Hartley on target in as many minutes. A McGovern point after a great initial field from Kevin Feely steadied the Athy ship and although Con Kavanagh and Ryan kicked points in response, last year’s League champions pushed on again. Cian Reynolds kicked his first point after Eaton and McGovern extended their tallies but the best was still to come as Mulhall kicked an outrageous point on the sideline after he turned his marker inside out. It was around this stage that saw Niall Kelly and Ben McCormack both make their competitive return to action. Kelly was back from a four month trip abroad as he filled in for the injured Mulhall on the Athy side while McCormack in quicker fashion than expected overcame a broken thumb to enter the field which will have no doubt pleased the onlooking Kildare manager Cian O’Neill. The contest could have had a grandstand finish when Declan McKenna caught a long ball from Ray Cahill but his shot was expertly pushed round the post by Matthew Anderson. McGovern with his fifth point duly put Athy 1-13 to 0-11 clear in the 52 nd minute but no team of Davy Burke throws in the towel and although Brian McDonnell got a black card, a pair of frees from Ray Cahill and a score from play by newly announced Kildare Under 20 captain Darragh Ryan had Sarsfields within touching distance but the clock beat them this time as Athy won out on a 1-13 to 0-14 scoreline.   Athy: Matthew Anderson; John Moran, Mark Hyland, Killian Mulhall, David Hyland, Cathal McCarron, Ross Bell, Michael Foley, Kevin Feely, Liam McGovern 0-5 (0-3fs), Tony Gibbons, Barry Kelly, Cian Reynolds 0-2, Darroch Mulhall 1-3, James Eaton 0-3 (0-2fs). Subs used: Eoghan McGlinchey for Gibbons h-t, Niall Kelly for D.Mulhall 42 mins. Sarsfields: John Melia; Tom Aspell, Sean Campbell, Cian Scanlon, Brian McDonnell 0-1, Alan Scully, Con Kavanagh 0-1, Matty Byrne, Caoimghin McDonnell, Darragh Ryan 0-3, Ray Cahill 0-2 (0-2fs), Conor Hartley 0-2, Barry Coffey 0-3, Cian Costigan, Declan McKenna. Subs used: Karl Hartley 0-2 for Costigan 4 mins, Cian McQuillian for Campbell 36 mins, Ben McCormack for Coffey 45 mins, Robbie Confrey for C.McDonnell 53 mins, Shea Ryan for B.McDonnell (Black Card) 55 mins. Ref: Liam Herbert