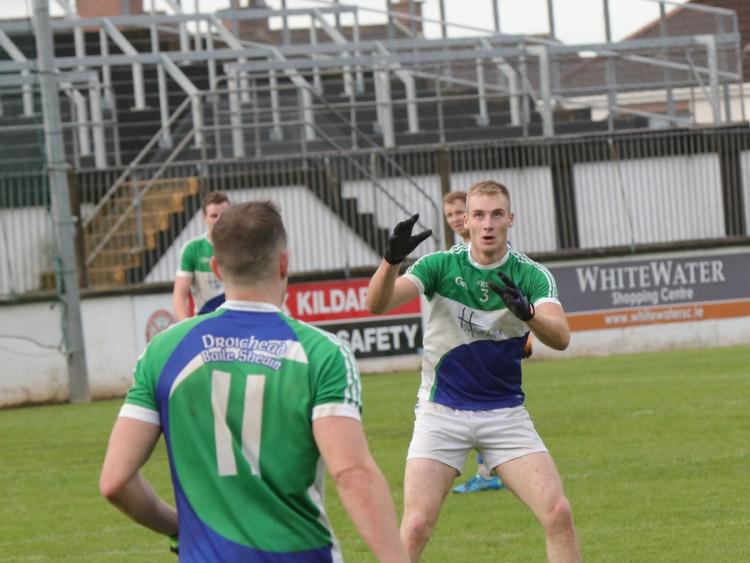 Johnstownbridge 1-13 Carbury 0-13 Senior Football Championship Round 1 Sam Doran’s well worked 22 nd minute goal was the difference as Johnstownbridge overcame Carbury in an eventful game that rounded off the opening weekend of the Club Championship at St.Conleths Park. Johnstownbridge came into the game on the back of an up and down league but they were at it from the get go here in an efficient performance. Carbury looked to have the edge with both Paul Cribbin and Sean Hurley missing out for the Bridge but the side on the edge of the Meath border had others show their worth including Sam Doran who nabbed 1-3 while the Flynn brothers especially Luke caused plenty of damage. It’s long been known that a lot of what Carbury do depends on Eoghan O’Flaherty but for the second time in three years his shadow Keith Cribbin kept him out of the game as he shut him down with O’Flaherty failing to score from play. The game was far from dirty but even still there were three red and four black cards given out throughout but it has to be said referee Billy O’Connell kept a good handle on proceedings as he let the game flow a lot even if things got a bit fractured late on. Johnstownbridge got the scoring underway with a Sam Doran point in the 2 nd minute before Carbury hit three on the bounce with O’Flaherty from a free and James Kelly and Jack Cully from play that gave them a 0-3 to 0-1 advantage. Carbury then didn’t score in the following ten minutes as Brian Flanagan’s well drilled outfit retook the lead with points from Doran, Luke Flynn and Kelvin McNally. The sides interchanged efforts with points for Carbury from Kelly and O’Flaherty being cancelled out by Doran and Daniel Flynn. Carbury had a chance for goal in the 21 st minute when an airborne effort from James Kelly landed in the vicinity of Derek McCormack and his palmed attempt was saved by Padraig Hurley. Johnstownbridge took full advantage of that miss as less than thirty seconds later the ball was in the Carbury net when Daniel Flynn brilliantly manoeuvred himself into space before Sam Doran got by a quartet of players and finished past Aaron O’Neill in the Carbury goal. Dan Flynn could have got another goal moments later but he shot wide before Cribbin and O’Flaherty got free of each others grasp’s to share points that left Johnstown with a 1-7 to 0-6 interval lead. Carbury had a goal chance from James Carey saved upon the resumption before Stephen McGlynn got a black card for a cynical trip on Seamus McNally. Johnstownbridge took control with both Flynns pointing before Kelvin McNally kicked his second free of the game. Carbury then lost Brian O’Flaherty to a black card but points from Eoghan O’Flaherty and Brian Milmoe kept them in touch. Both duly knocked on points with Cathal McNally impressing off the bench with a brace before O’Flaherty and James and David Kelly responded for Carbury. Johnstownbridge still had a five point lead entering the final few minutes but the loss of both Keith Cribbin and Eoin O’Donoghue to black cards were followed by the dismissal of Seamus McNally on a second bookable offence. As a result Carbury rallied with a pair of O’Flaherty frees that left just three points between the sides entering stoppage time. A mini scuffle down at the Kilcullen end briefly interrupted things with both Shane Flanagan and Dean Cummins getting straight reds for their role in events. O’Flaherty saw a last gasp free rebound off the post for Carbury and although there was worry in the winners defence when the ball sprung into the air nothing came of it as Johnstownbridge took the local bragging rights with a three point victory. Johnstownbridge: Padraig Hurley; James O’Connor, Joey Higgins, Aidan Higgins, Shane Flanagan, Seamus McNally, Keith Cribbin 0-1, Luke Flynn 0-2 (0-2fs), Eoin O’Donoghue, Johnny Doyle, Sam Doran 1-3, Glen Doran 0-1, Jimmy Farrell, Kelvin McNally 0-2 (0-2fs), Daniel Flynn 0-2. Subs used: Cathal McNally 0-2 for Doyle 36 mins, Sean Holton for Cribbin (Black Card) 54 mins, Niall Vaughan for O’Donoghue (Black Card) 62 mins. Carbury: Aaron O’Neill; Justin Reilly, Willie Groome, Dean Cummins, Brian O’Flaherty, Morgan O’Flaherty, Andy Dermody, Alan Kearney, James Carey, James Kelly 0-3, Derek McCormack, Eoghan O’Flaherty 0-7 (0-7fs), Jack Cully 0-1, Stephen McGlynn, Ger Cunningham. Subs used: David Kelly 0-1 for Kearney h-t, Ciaran McKeon for McCormack h-t, Mark Cully for McGlynn (Black Card) 36 mins, Brian Milmoe 0-1 for B.O’Flaherty (Black Card) 43 mins. Ref: Billy O’Connell