Johnny Doyle in a Lilywhite jersey was a great boost to the Kildare side and fans, as they ran out the victors with a 9 point margin 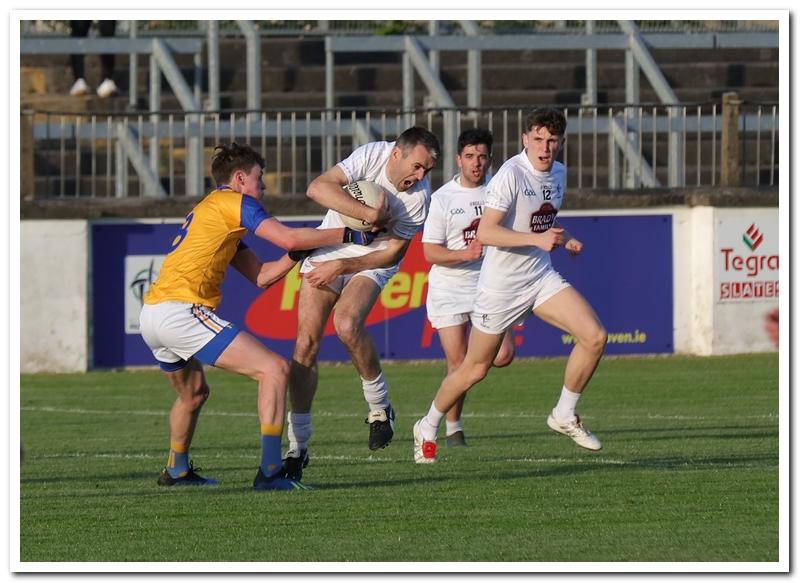 The familiar sight of a determined Johnny Doyle in a Kildare jersey, against Longford in the Junior Football Championship semi final

It would normally be a run of the mill Junior semi-final but it didn’t work out that way as Johnny Doyle appeared in a Kildare Jersey for the first time in five years, and his three point tally helped his team to a Leinster Final. Whether that puts pressure on Cian O’Neill’s senior today or whether it will be viewed as an encouraging omen for the Kildare seniors remains to be seen.

The Allenwood man appeared in the 33rd minute and within minutes, he was back to what he does best – that is, kicking points on target, including an incredible effort off the outside of his right foot from on the wing.

The 41 year old certainly stood out but at the other end of the spectrum are Padraig Nash and Jack Robinson and despite being twenty years younger than Doyle, they look to have very bright futures as they scored 1-8 between them with Robinson in particular having a fine outing where he scored a brilliant goal when lobbing Longford goalkeeper David Mulvihill.

Declan McGrath’s men will now return to Croke Park for a second successive year when Meath will again be the opposition in the Provincial Final.

It looked like it would be one way traffic from the start as Kildare raced into a five point lead with both Padraig Nash and Jack Robinson causing chaos.

Robinson kicked three brilliant points from play but Padraig Nash who recently departed the Senior Squad wasn’t left out either as he kicked a brace.

Incredibly though Longford were level within a couple of minutes after Nigel Rabbit and Conor Farrell kicked points and centre back Farrell then got forward for a goal as he placed a shot under Matthew Duggan after Aidan McGuire put him into space.

Longford only scored one point for the rest of the half with Rabbit kicking his second point but it was the home side who controlled the remaining minutes with points from Robinson, Nash, Lawless, Mark Nolan and Barry Noone giving Kildare an 0-11 to 1-4 half-time advantage.

Kildare practically put the result to bed in the early minutes of the second half with scores from Noone, Lawless and Niall Murphy while captain Seamus Hanafin also hit the crossbar after going on a storming run.

Longford hit back with efforts from Aidan McGuire and Shane Farrell but Johnny Doyle’s introduction soon changed the game back in Kildare’s favour with his first point of two in a row gathering the biggest cheer of the game before Robinson scored a goal in the 48th minute when he glided away from defenders and the Clogherinkoe star then audaciously lobbed the ball into the top corner.

Longford replied with Rabbitt, O’Brien and Fergal Sheridan but Kildare finished in style with Doyle’s third point coming before Robinson rounded off on his 1-5 tally as the Lillywhites impressively booked a place in the final against Meath. This will be the curtain raiser to the Leinster Senior Football final, in two week's time. And who knows, if the Gods are with us - a big ask, I know - we have a slim chance of having two Kildare teams competing for honours at the Leinsters!