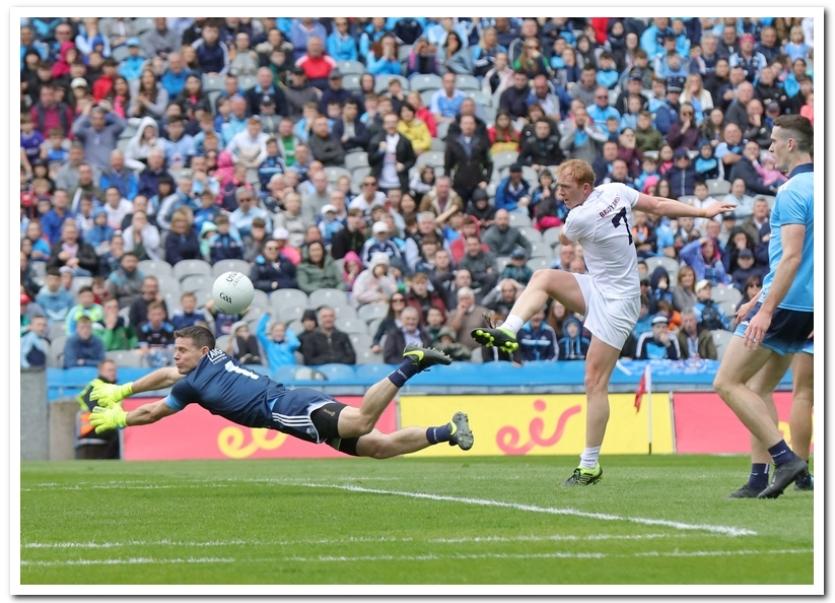 The mountain proved too high to climb as Kildare succumbed to defeat at the hands of the defending All-Ireland Champions Dublin in the Leinster Senior Football Semi-Final at Croke Park.

The contest was played in front of a little more than 36,000 people and while Kildare were hugely competitive in the opening period Dublin’s powerplay upon the resumption settled things as they outscored Cian O’Neill’s side by 0-15 to 0-4.

Kildare will also be disappointed that they didn’t find the net as they created a couple of glorious opportunities but Stephen Cluxton on more than one occasion denied them.

Kildare will be pleased that they denied Dublin scoring a goal but they were still by far second best and they will need to rise themselves for the Qualifiers while Dublin will renew their rivalry with Meath in the Leinster decider.

Dublin are aiming for their ninth consecutive Leinster Title and even though Adam Tyrrell kicked a difficult opening minute free for Kildare it was the Dubs who made all the early running.

Paul Mannion was late selection for Jim Gavin’s men after he had his red card against Louth overturned during the week and he equalised with a lovely effort off his left foot.

Kildare were defending relatively well against the vaunted Dublin attack but it was only a matter of time before the Sky Blues went further clear and that duly happened when they opened up a 0-7 to 0-1 lead by the ten minute mark with scores from Mannion, Cormac Costello, Brian Fenton and Ciaran Kilkenny.

It could have been worse from a Kildare point of view after Costello had a shot saved by Mark Donnellan before the rebound attempt was blocked on the line.

Kildare began to grow into the game afterwards though with Ben McCormack in particular proving a threat with two points on the back of a Neil Flynn free.

Dublin were able to maintain the advantage however with points from Costello and Con O’Callaghan leaving them 0-9 to 0-4 to the good.

Ben McCormack had a glorious goal chance in the 24th minute for Cian O’Neill’s Lillywhites when he skinned David Byrne on the endline but on his century Championship appearance Stephen Cluxton stood tall to deny the Sarsfields man.

Costello and Kilkenny added on further scores for the five in a row chasing All-Ireland Champions but Kildare finished the half well with points from Tyrrell and Mick O’Grady leaving Dublin with a four point buffer at the end of an entertaining half.

The second half began with Costello kicking a free for Dublin but Kildare were finding some gaps in the Blue defence with Ben McCormack latching on to a long inside ball from Adam Tyrrell but the corner forward could only pull his shot tamely wide.

As they tend to do to most teams Dublin then went through the gears with points from Mannion and Brian Howard’s first handing them a double score lead at 0-14 to 0-7.

On another day Kildare could have at least bagged one goal and their luck was summed up when McCormack had the goal at his mercy in the 50th minute but he stumbled and after Keith Cribbin’s rebound was blocked the chance had gone.

Kildare’s bleak chance at keeping in touch then went as Dublin went through the motions for the rest of the contest.

Tyrrell and Kevin Feely kept the scoreboard ticking over for Kildare but Dublin’s power and pace was proving way too much for them with five points in a row from the 52nd to the 60th minutes courtesy of Costello, Mannion, O’Callaghan and Paddy Small giving them an eleven point lead.

McCormack and David Hyland kicked late consolation efforts for Kildare but the contest was long over as Mannion, Fenton, Costello and Kilkenny all found the target as Dublin advanced to another Leinster Final with a comfortable 0-26 to 0-11 success.