Cats' class proved too much for Lilywhite hurlers 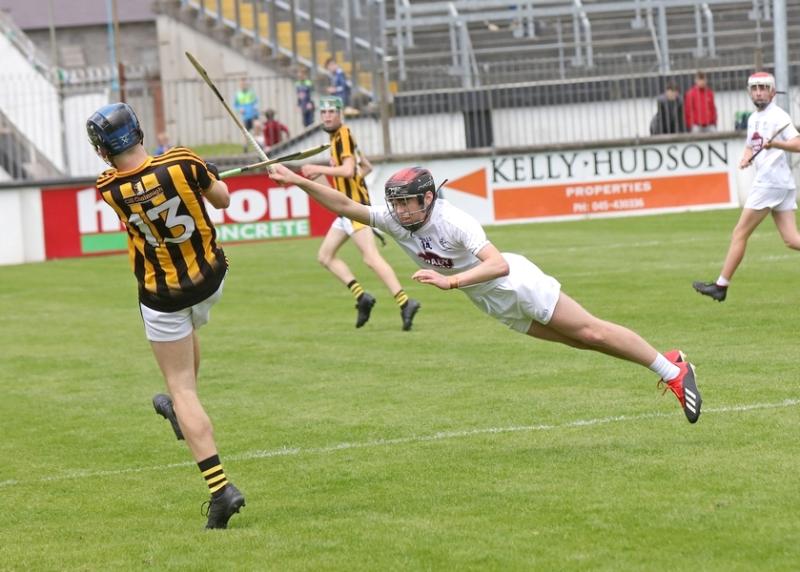 Cathal McCabe (Maynooth) in action today for Kildare against the might of Kilkenny in the MHC semi-final. Photo Pat Tinsley

Kildare’s incredible Minor Hurling Championship campaign came to an end when they went down to the might of Kilkenny in St Conleth's Park this afternoon. The last four outing was Kildare’s seventh championship game of the year but in the end, Kilkenny’s extra class and precision proved too hot to handle for the home side.

Kildare were hugely competitive throughout but in Billy Drennan and Tommy Clifford, Kilkenny had real skill up front with the corner and full forward combination contributing 1-15 between them. Kildare started well and led after ten minutes but once Colman O’Sullivan netted Kilkenny’s first goal there was no looking back from there.

While the defeat was largely expected with Kilkenny being one of the favourites for the All Ireland Minor Hurling Championship and having such pedigree, the journey in Kildare getting so far is bound to do wonders for the development of hurling in the county.

Kilkenny went into the game as raging hot favourites after a flawless Round Robin campaign where they defeated the likes of Wexford, Dublin and Offaly but Kildare were in the game for the opening quarter at least. Both teams missed scoreable early frees before Kilkenny danger man Billy Drennan knocked over a brace of nice efforts from play for last year’s beaten Leinster Finalists.

Kildare got on the board for the first time in the fifth minute with a free from David Qualter but Kilkenny hit back immediately with a score from Ian Byrne at a difficult angle. It was at this stage that Kildare really began to get their game going though with three points in a row giving them the lead for the first time with two further Qualter frees coming on the back of a Darragh Melville attempt from play.

That gave Kildare a 0-4 to 0-3 lead but it only seemed to anger Richie Mulrooney’s Kilkenny outfit as after Drennan had a shot saved by Alo Hackett the opening goal eventually came with Colman O’Sullivan finding the target after he latched onto a pass from Drennan.

Kildare replied with a point from Jack Higgins but Kilkenny soon moved up a gear and as easy as that the Cats hit 1-6 without reply to move eleven points clear approaching the end of the half. The second Kilkenny goal came courtesy of full forward Tommy Clifford when after an original save from Hackett and a shot stopped on the line he forced the ball home.

Points from Drennan, Peter McDonald, Jack Doyle and Clifford again soon followed and Kilkenny looked in a very comfortable position. The half ended with Qualter and Drennan exchanging frees as the team in Black and Amber took a 2-11 to 0-6 advantage into the break.

Kilkenny continued their dominance with points from Drennan and Clifford opening up proceedings in the second half but they never really raced clear like one might have expected them to. Kildare kept in touch with points from Qualter, Cathal McCabe and Darragh Melville and while they never threatened the result it was good to see that they didn’t drop the heads. Come the halfway mark of the half, Kilkenny held a 2-17 to 0-11 lead after Clifford, Drennan and Andy Hickey scored with just a pair of Cathal McCabe frees keeping parity for Kildare.

The young Lillywhites can count themselves somewhat unlucky not to have found the net throughout the hour with Ferran O’Sullivan in particular having an effort palmed away. Billy Drennan finished with ten points for Kilkenny and he also went close with a shot that blazed over the bar.

The contest sort of meandered to a predictable conclusion from there on in but Kildare did finish well with points from O’Sullivan, Melville and Qualter.

Kilkenny would have been relatively disappointed with their overall display but with Drennan and Breadon Wheeler rounding off the scoring, they can now look forward to a Leinster final meeting with Wexford.