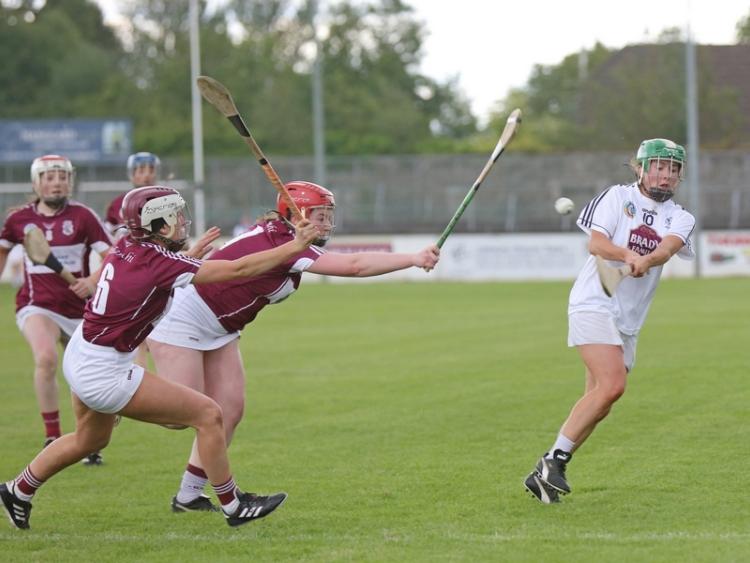 Two goals from Megan Dowdall gave Westmeath victory over Kildare in the opening round of the All Ireland Camogie Championship yesterday afternoon.

Dowdall netted in each half and it helped the Lake County keep Kildare at arms length in a game they led from the outset.

Kildare’s prime attacking threat Siobhan Hurley was back from injury and while she scored 1-5 it was a day they were chasing from early on and they gave themselves too much to do with Westmeath having a bit more variety in attack.

The home loss puts Kildare under immediate pressure now with a visit to Leeside to take on Cork awaiting next weekend.

Westmeath opened up proceedings with Megan Dowdall knocking over a score in the 1st minute before it was cancelled out by a Siobhan Hurley free.

The sides weren’t level for long though with Dowdall getting behind the Kildare rearguard and drilling a shot past Tanya Johnson in the Kildare goal.

Dowdall’s goal was then followed up by points from Muireann Scally, Sheila McGrath, Pamella Greville and Ava Balfe as Westmeath raced 1-5 to 0-1 clear.

The Kildare response was emphatic however with the Division 3 League Champions getting two goals in the space of six minutes with firstly Holly Tynan firing a shot home after pouncing on a breaking ball while minutes later Hurley found Deribhle Byrne inside and she found the net to level up matters.

Westmeath to their credit kicked on afterwards for the rest of the half with Pamela Greville scoring three points in a row and she also had a goal bound attempt rattle into the side netting.

Sheila McGrath rounded off the half’s scoring with a point on the burst as Westmeath took a four point buffer into the break.

The second period was tightly fought with both sharing efforts over the course of the first ten minutes with three Hurley frees rebounded by Westmeath points from McGrath and Greville as the side in Maroon and White maintained the four point lead.

That advantage was soon doubled though as after Mairead McCormack knocked over her first score from a free, Pamela Greville got in for her second goal when she finished brilliantly and the game looked as good as over.

Kildare didn’t give up as Hurley with the help of a heavy deflection forced a 21 yard free over the line for a 47th minute goal and with Emma Kielty converting a score from distance Peter Williams’s side were back within range.

Westmeath could have killed the game when Greville found space but Kildare netminder and Captain Tanya Johnson stood tall to deny her.

The Kildare resurgence kept coming apace as a result with Hurley and Tynan getting the gap back to two points approaching stoppage time.

Westmeath had gone almost twenty minutes without a score as the rain battered down on St.Conleths Park but substitute Michelle Murtagh settled them with a late insurance point as they battled to a three point victory.