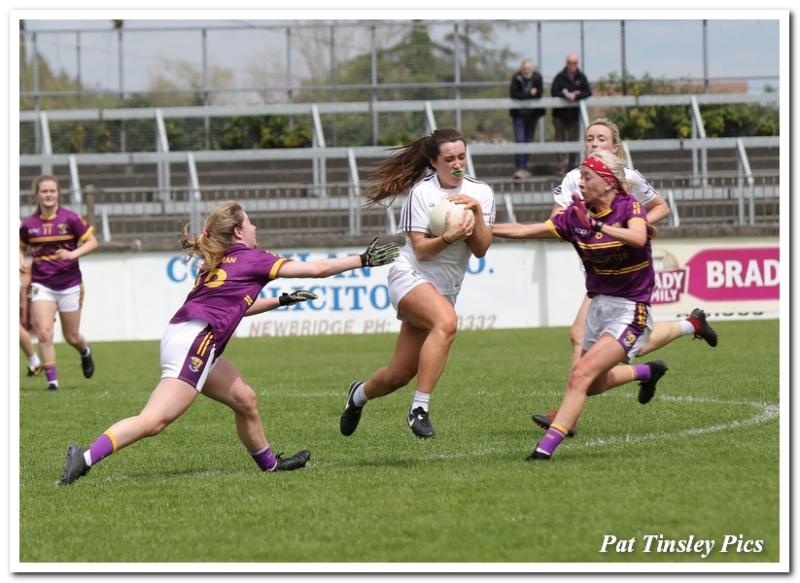 Goals were the order of the day and Wexford got four of them and the final scoreline probably flattered Kildare as Wexford proved a much bigger threat up front.

Kildare had enough of the ball to win the game but a series of unfortunate goals as well as a number of wides cost them dear and they must now regroup for the Qualifiers.

The first score of the game arrived within four minutes with Kildare Captain Grace Clifford kicking over a point after being put into space by Neasa Dooley.

Despite the early lead Kildare were soon rocked as Wexford found the net when a hopeful inside ball from Shauna Murphy bounced over the flatfooted Cliodhna Malone and rolled all the way into the net.

It could have been even worse for Daniel Moynihan’s outfit moments later when Maria Byrne got in behind the Kildare defence but the full forward could only kick her effort directly at Malone.

Kildare soon settled themselves with three points from play courtesy of Clifford, Aoife Ratttigan and Ellen Dowling as the home side edged their way in front at the halfway mark of the half.

Consecutive scores from Byrne soon overturned the deficit in Wexford’s favour but that could have all changed when a pass from Ciara Wheeler had Ellen Dowling bearing down on goal but her left footed attempt was parried away by Mary Rose Kelly.

Byrne and Lara Curran then shared points before Wexford went further ahead with a score from Kellie Kearney coming before Katie White rattled the net with a fortunate enough effort.

Kildare did at least finish the half with a pair of Curran points but it was Wexford who went in leading 2-4 to 0-7.

A Chloe Foxe score gave Wexford the edge at the start of the second period but a pair of Curran frees kept Kildare in touch as they trailed by two points.

Wexford overall looked a bigger threat going forward and they nearly had goal number three when a shot from Aishling Murphy went too high before Chloe Foxe converted her second free.

Kildare kept tact with a point from Ellen Dowling before Katie White got Wexford’s third goal in the 46th minute that left the Slaneysiders with a 3-8 to 0-10 lead.

Kildare sub Orlaith Sullivan had an impact off the bench in kicking a trio of points but after Wexford sub Murphy got their fourth goal, Sullivan’s impact proved rather irrelevant.

It could have been worse for Kildare but goalkeeper Cliodhna Malone produced a string of phenomenal saves to keep the scoreboard somewhat respectable.

Kildare themselves got a late goal when Neasa Dooley struck home but it arrived way too late as Wexford booked a Leinster Semi-Final spot against Meath.