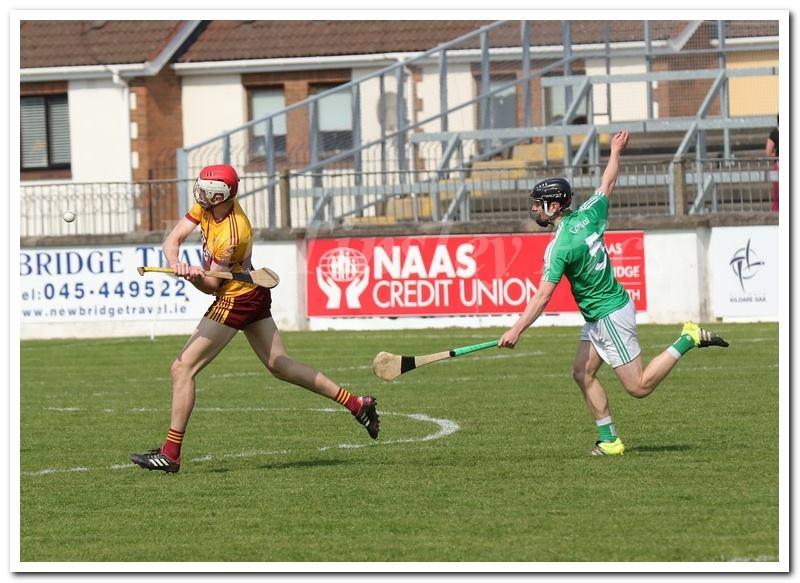 A 43rd minute Liam Power goal helped Eire Og Chorachoill to victory over Leixlip in the opening round of the Winners Group in the Senior Hurling Championship on Friday Evening.

It was a tightly contested affair but Power’s goal as well as 0-12 points from Liam Dempsey got the Donore based outfit over the line.

Leixlip led by a point prior to Eire Og’s goal but really struggled after it as the victors went up a gear.

Leixlip were winners over Clane in the Preliminary Round and even though they netted in stoppage time they left defeated despite Cathal Melville putting in a very impressive individual performance.

Eire Og Chorrachoill started well and had four points on the board in as many minutes with two Liam Dempsey frees coming either side of scores from play by Garry Johnson and Barry Cormack.

Leixlip midfielders Jack Travers and Cathal Melville got them off the mark before Liam Power and Lorcan Shinnors exchanged efforts.

It was a dominant first quarter for Eire Og though with two good points from play by Liam Power registering before another Dempsey free left them with a 0-7 to 0-4 lead.

Melville from a free was Leixlip’s sole score during that period but they were slowly but surely growing into the game as after Paul Kennedy and Paddy Murphy shared attempts, Travers and Melville powered shots between the posts to leave just a point between them.

Dempsey steadied Eire Og with his fourth free of the half but Melville was just as accurate down the other end and two consecutive placed balls brought the sides level for the first time.

Eire Og did go into the dressing rooms with the advantage though as another Dempsey free gave them a one point buffer.

Leixlip started the second half in style with two points in the opening three minutes giving them the lead for the first time with Melville and John Roche both finding the target.

The Eire Og Chorrachoill response was instant however when two Dempsey frees put them back in front and the accurate corner forward also had a 21 yard free blocked on the line.

The topsy turvy start to the half continued with Melville and Roche increasing their tallies for Leixlip but the game’s turning point was only around the corner when a mishit strike from Danny Boyle brought the sliotar into the hands of Timmy Hennessy and he offloaded for Liam Power to drive a shot past Lee Hogan and give Eire Og a 1-12 to 0-13 lead.

Hennessy and Boyle followed up with points and in the blink of an eye they were four clear.

Melville replied with a trio of scores to bring is total to ten but Eire Og Chorrachoill were now in a rampant mood and with the help of some poor defending Dempsey and Paul Dempsey knocked over points for fun.

Leixlip got a late consolation goal when a long free from John Roche slipped through the hands of Kevin Connor and past Paul Dermody to reduce the gap to four points.

Eire Og didn’t panic though and stoppage time scores from Cormack and Johnson sealed the win.