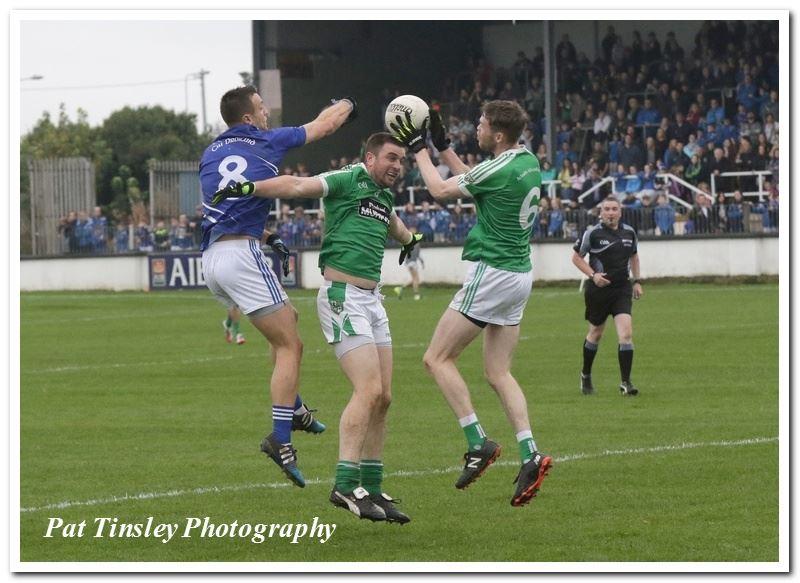 Moorefield sealed a place in the last four of the Senior Football League with a six point victory over Celbridge.

Ross Glavin’s side looked in a degree of trouble when trailing 1-3 to 0-1 early on but after James Murray netted in the 25th minute they kicked on and secured a rather comfortable success.

Celbridge will be disappointed as they were excellent in that first quarter and with a bit more composure they could of added on a few more goals but they were overpowered in the second half as they failed to score till the 54th minute.

Both teams were without their sizeable Inter-County contingent but Moorefield did welcome back the experienced duo of Daryl Flynn and David Whyte to their squad with Flynn returning from an extended break and he emerged as a second half sub.

Celbridge got the scoring underway with a David Hughes free and while Moorefield replied with an Eddie Heavey score it was mostly the team in Blue doing the attacking early on.

Hughes soon kicked his second free and when a wayward Tom Kinsella kickout went to David Byrne the wing forward was fouled by Liam Healy for a penalty and Byrne took the kick himself in slotting under the Moorefield stopper for a well taken goal.

The home side almost had another one moments later when Conor Doyle found his way inside but his shot hit the top of the bar and he had to settle for a point.

Moorefield looked like they steadied the ship with points from Ciaran Kelly, Aaron Masterson and Kevin Murnaghan but Celbridge followed suit with Hughes, Byrne and Mark O’Sullivan on target.

The woodwork was then rattling for the second time in the half with a Craig Mooney effort rebounding away and Moorefield soon took full advantage with points from Eoin O’Connor and Mark McDermott coming before captain James Murray kicked in a goal to level up matters.

O’Sullivan and Adam Sweeney duly exchanged scores as an entertaining half came to an end at 1-7 each.

The first half Murray goal for Moorefield seemed to change the whol tone of the game however as they dominated the entire second half.

Kelly converted his second free before five more points courtesy of Masterson, McDermott and Aaron Mullins pushed the County Champions clear on the scoreboard and it could have been a bigger margin had a Eddie Heavey shot not been saved by Shane McNamara.

Hughes eventually got a Celbridge score with a free six minutes from time but points from Masterson and McDermott had the margin out again.

Paddy Wall and Michael Konstantin who was industrious throughout added efforts late on but it was still Moorefield who had the last say with a Jason Phillips fisted score as the Newbridge side claimed the victory.