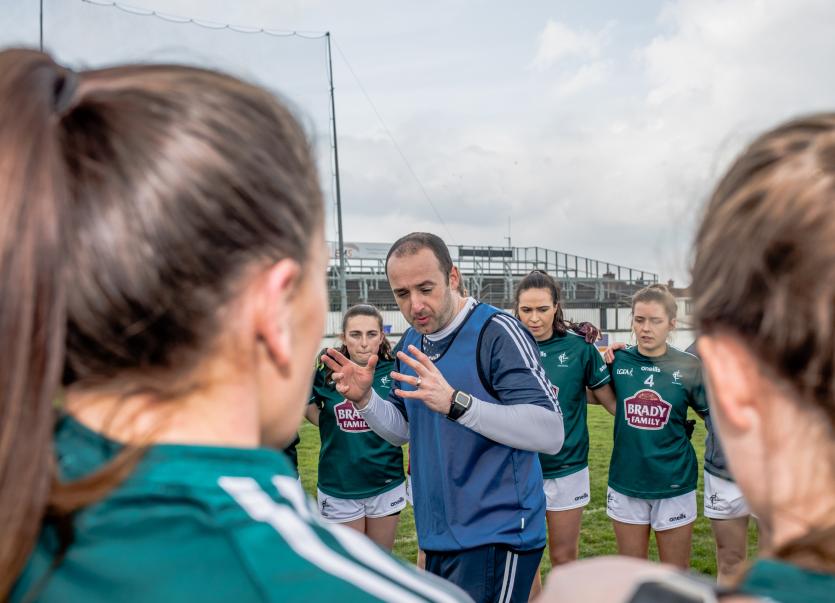 Kildare Ladies Manager Daniel Moynihan cut a distraught looking figure after his side bowed out of the All-Ireland Intermediate Championship on Sunday afternoon.

Roscommon ran out 2-18 to 2-10 winners and were deserving of that title but Moynihan still couldn’t hide his disappointment.

“To lose by eight points in an All-Ireland Quarter -Final was definitely not within our thought process heading into today’s game and we thought it would be very tight and the first half was I suppose.”

“We never got going in the second period though and they are a team that has been working together under Michael Finneran the last few years and they punished us and kept the scoreline ticking over whereas we found it hard to even get the ball down the other end of the pitch”.

Despite the loss bringing an end to Kildare’s year the Galway native still saw plenty of plus points.

“There is huge level of positives even from the panel that I worked with from last year to this year as I think there is only nine players that have been there both years and we’ve pulled in a huge number of Minors”.

“We are dealing with a hugely inexperienced group of players and days like this will only help them and they will improve as individuals and at least Kildare is going in the right direction with youth on our side and players that are enthusiastic and want to play for the jersey and that is a big plus”, Moynihan said.

One thing the manager wants to improve on is the older players in the squad as the Kildare bench resembled that of an underage team and he called on more senior players to make themselves available.

“Coming from a different county I would have expected a lot more to come in so if there is a fear or a little negativity at what happened previously my thoughts would be to have an open mind about it and what’s the worst that can happen”.

“When you go in you may enjoy yourself and find yourself on a panel where you see yourself improving and it will benefit you and your club going forward”.“At the end of the day I’m sure a lot of these players would love to wear a Kildare jersey if they got the opportunity and we will give that to everyone and if you work hard enough you will get your place and that’s our motto so hopefully that will bring a few players in”.