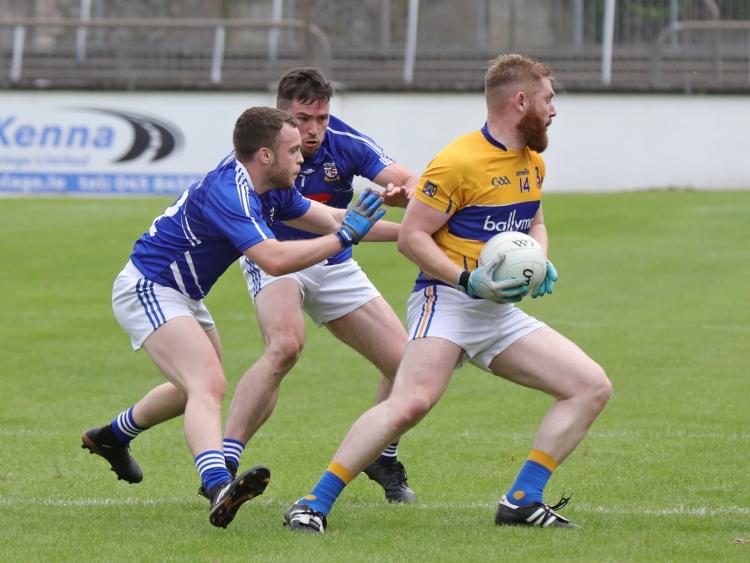 A four goal Celbridge got the better of Raheens in the opening game in St.Conleths Park on Sunday afternoon.

Paddy Brophy, Fergal Conway, David Byrne and Davy Hughes all found the net in a promising opener for one of the favourites in the Senior Football Championship.

Paul Curran is in his first year in charge of the team and despite Kevin Flynn and Kevin O’Callaghan missing out completely and Mick O’Grady only appearing as a sub they showed the strength in depth in their ranks.

The game was only level once and Celbridge led for the rest as a Raheens team without Liam Power really struggled.

Fergal Conway and Paddy Brophy top scored for the winners with 2-9 between them in a workmanlike performance.

Celbridge got the scoring underway with a Paddy Brophy point in the opening minute before Alan Igoe replied with a free a couple of minutes later.

Celbridge looked electrifying in attack though and 2-2 in the space of four minutes threatened to blow Raheens away with a pair of Brophy frees splitting the posts before the full forward added a goal to his tally when Tony Archbold and David Byrne combined to set him up and he stroked the ball under the body of Declan Campbell.

That was Celbridge’s second goal with Davy Hughes finding the net just seconds earlier when he palmed home after being set up by Mark O’Sullivan.

Raheens responded with points from Igoe while David Malone also had an effort expertly pushed away by Shane McNamara.

Brophy, Davy Hughes and Fergal Conway kicked further scores for Celbridge before the break but Raheens were still very much in the game when an inside pass from Alan Igoe found Rory Donnelly and the former Clare star was denied by McNamara before lashing in the rebound.

Igoe followed up with a pair of frees with Celbridge taking a 2-7 to 1-5 lead into half-time.

The opening stages of the second half saw Mick O’Grady return to action for Celbridge when he came in for the black carded Hugh McGrillen which resulted in Igoe converting his sixth point for Raheens.

That was as good as it got for the 2017 Intermediate Champions however as from there Celbridge really upped it with 1-6 without reply putting the result to bed.

A Davy Hughes free was followed by a wonderful individual goal in the 38th minute from Fergal Conway as the powerful midfielder fought off five different challengers before beating Declan Campbell.

Scores from Brophy and Bryan Flynn then made it 3-10 to 1-6 and it could have been an even bigger lead had Flynn again not being stopped by Campbell.

Raheens ended a seventeen minute scoreless spell with a Killian Thompson effort in the 47th minute but the respite was only brief as David Byrne kicked in Celbridge’s fourth goal minutes later.

The game ended with the sides exchanging points as Donnelly got a brace for Raheens before rather aptly Brophy and Conway put the seal on a comfortable victory for Celbridge.