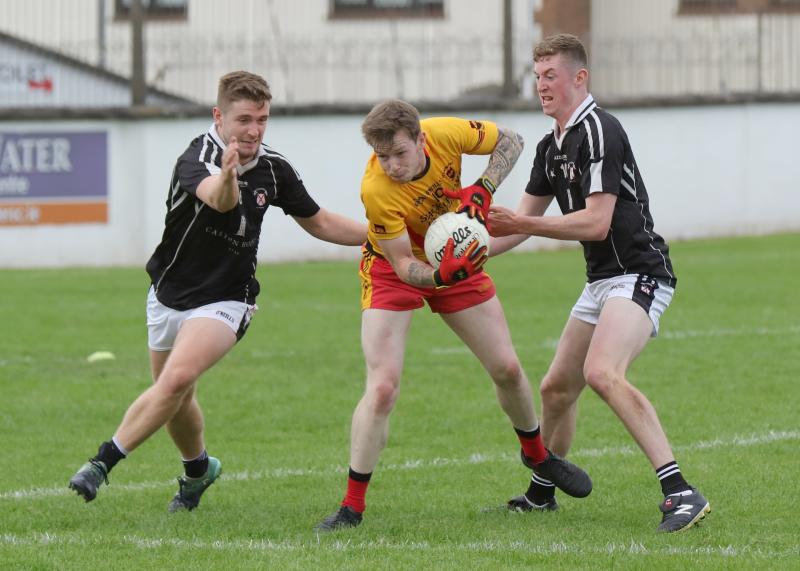 For a man that barely touched the ball in the first half it was some feat for Neil Flynn to finish up with 2-5 as Maynooth came from behind to defeat St.Laurences in a game full of incident on Sunday afternoon.

Flynn could have even had more than an eleven point tally as he also missed a penalty.

Flynn was the star of the show with his second half performance but it was also a game notable for Mark Donnellan playing outfield and scoring three points from full forward.

Maynooth won by five in the end but approaching half-time they trailed by seven so it was quite a turnaround with Ruadhan O’Giollain and John McAndrew also finding the net.

Padraig Fogarty was a big threat for Larries but after Mark Glynn and Sean Higgins were both sent off the South Kildare outfits challenged waned a little.

Fogarty who finished with ten points started the scoring with a point in the 4th minute before Maynooth replied in style as Ruadhan O’Giollain slalomed his way through the Larries cover to slot left footed past Shane Connolly.

Larries weren’t too perturbed though and they kicked the next six points with three efforts from Fogarty including a couple from play coming between scores from Padraig O’Neill, Barry Mackey and Jason McHugh.

Maynooth kicked their first point courtesy of Kevin Dunne in the 18th minute but again it was the Larries who were making all the running and Fogarty who was having one of those days kicked another trio of points and with McHugh also doubling his tally Brian Kelly’s outfit looked in great shape.

A goal at that stage would have surely ended the game and Adam Steed went close when he was denied by former Meath stopper Odhran Cussenn.

Mark Donnellan and Daragh Miley then swapped points before Maynooth got goal number two just before the change of ends with John McAndrew scoring on the counter.

There was still drama before the end though as Mark Glynn and Sean Higgins both got straight red cards although it has to be said they looked particularly harsh especially for the Maynooth man.

As a result Larries led by three points but that lead was wiped out within minutes with Neil Flynn who was remarkably quiet up to that stage landing a pair of points with his county colleague Mark Donnellan also scoring with a peach of an effort with the outside of his foot on the near sideline.

O’Neill’s second point edged Larries back in front and when Shaun Fahey palmed in a goal in the 41st minute they looked to be in command.

Momentum was hard to maintain in such a chaotic contest however and after Flynn and Donnellan shared scores with McHugh and O’Neill, Maynooth got back to within a point with O’Giollain, Dunne and Chris Canning setting up a dramatic finale.

Larries looked like they might have enough to hold off their opponents with two more Fogarty points but it was from there that Neil Flynn exploded into the game as he scored a vital goal on the back of a fine Mark Donnellan pass from out the field.

Larries had barely recovered their breath when Flynn won a penalty in the next play and while he missed he kicked the next two points to push his side a couple of points clear.

The centre forward then wrapped up the game with another goal in stoppage time as Maynooth dramatically secured a come from behind success.