Super Sash get one over arch rivals in ferocious local derby 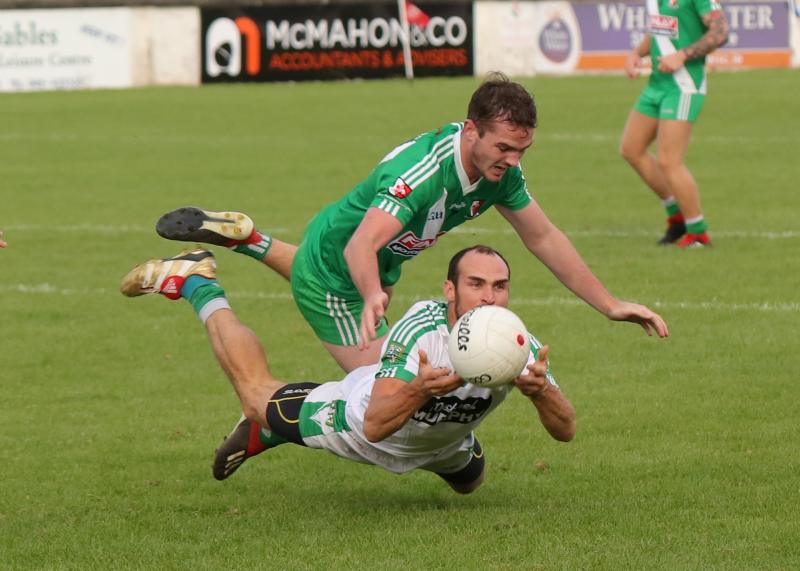 It was on a different level to anything else we seen in the Senior Football Championship over the weekend as Sarsfields recorded their first win over Moorefield since the 2016 County Final.

Sarsfields were hugely determined for this one and if truth be told the Moores were rather fortunate to get away with just a one point defeat.

The Sash brought an intensity and belief that their neighbours were unable to match and Ross Glavin must have a slight worry after seeing his Moorefield team beaten for the second successive game.

The Dam is far from burst but there is one or two creaks beginning to show in the three in a row chasing County Champions but it is still early days and in the grand scheme of things there is still plenty of time to solve the issues.

For Sarsfields and manager Davy Burke it was a huge win to get to not only enhance the manager’s Cv but to send out a warning that they are contenders again after two disappointing years by their very high standards.

Sarsfields were out of the traps quickly with Shane Doyle getting an opening minute point before Moorefield hit back with two Eanna O’Connor frees giving them the advantage.

Ray Cahill equalised with a free in the 13rd minute and in a game where scores were at a premium Moorefield pushed ahead with three scores on the bounce.

Adam Tyrrell found it hard to get any space for the entire game as Shea Ryan kept a very close eye on him but he did give an exquisite pass inside for O’Connor to put the Moores back in front and that was followed by another free from the Kerry man while David Whyte also scored from play.

Sarsfields were in no mood for lying down and in a topsy turvy half they had their noses back in front when a brace from Caoimhin McDonnell was added to by Cahill and Declan McKenna.

The game was not only hotly contested on the field as the same could be said about the sidelines but both would have been content enough when O’Connor levelled the game as the teams went into the dressing rooms deadlocked at 0-6 apiece.

The third quarter is where Moorefield usually get a push on and although Tyrell with his only point and O’Connor were on target the avalanche wasn’t coming as Sarsfields were still right with them after Doyle and Conor Hartley found the target.

Both teams had strong benches and although Moorefield threw on the old reliables in Ronan Sweeney, Daryl Flynn and Jason Phillips they had little or no impact with Sarsfields finishers doing much more.

Cahill had Sarsfields back in front with a free in the 50th minute before sub Ben McCormack kicked a brilliant point under fierce pressure near the sideline.

Cian McConnell also got in on the act and in the space of a few minutes Davy Burke’s side were 0-11 to 0-8 clear entering stoppage time.

Moorefield always fight to the end though and when O’Connor and James Murray scored they looked like thy could snatch a draw.

The kickout from that score led to the Sarsfields insurance point as Brian McDonnell flicked on a pinpoint Patrick O’Sullivan clearance and all of a sudden they were away and Robbie Confrey scored.

It still wasn’t done with though as O’Connor kicked his eight point and it looked like he had another chance when a free was awarded but instead they tried to work the ball closer to goal and Sarsfields turned them over to hold on and move into prime position in the group.