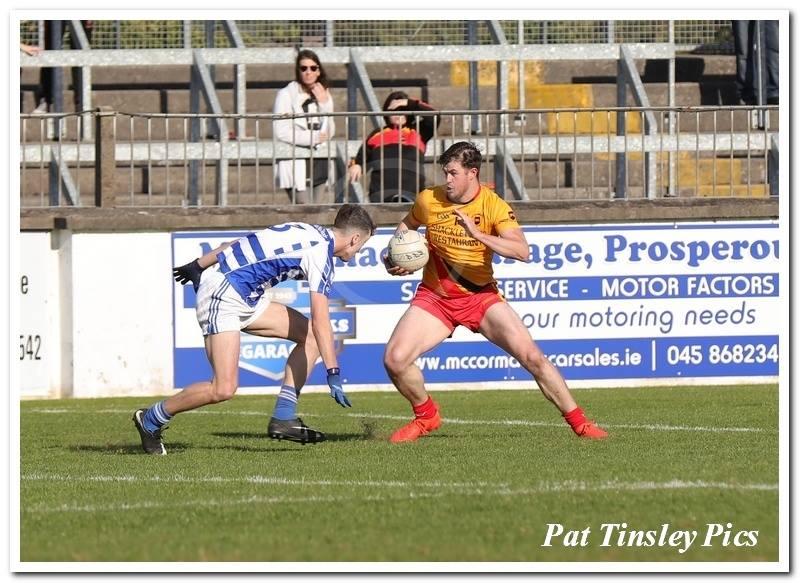 Seven points from the boot of Padraig Fogarty gave St.Laurences a two point win over Naas in the Senior Football Championship at St.Conleths Park.

It was a tight and tactical affair that never really got the pulses racing but Fogarty’s class was there for all to see as he got all but two of the Larries points.

Laurences led all the way through and they are now in an ideal position to qualify from the group ahead of a final round meeting with local rivals Castledermot in a fortnight’s time.

It’s the second successive Saturday that Naas have struggled and they now know they must win their final game to have any chance of progressing after their attack disappointed again.

After opening round defeats to Maynooth and Castledermot respectively both made a couple of changes as they hoped to get their Championship up and running.

Brian Kelly’s St.Laurences side reshuffled their pack with midfielder Mark Glynn ruled out through injury but they were the more threatening at the start with Daragh Miley opening the scoring after seven minutes before Padraig Fogarty followed up with the first of three opening period scores.

Naas really struggled to get anything of substance going until Darragh Kirwan after a couple of missed attempts found the target almost halfway through the half.

Fogarty kicked consecutive points from play in response for Larries though as they went 0-4 to 0-1 ahead in a rather poor half of football.

Naas’s fortunes worsened when Kildare Captain Eoin Doyle went off injured and they proved incredibly wasteful in front of goal which was summed up when a rather routine looking Eamonn Callaghan free went off the post and with the goal gaping Ronan Joyce was denied by Shane Connolly before brother John then pulled a shot agonisingly wide as Laurences went into the break in front.

Naas introduced Luke Griffin from the bench at the break and a 33rd minute point from himself as well as an Eamonn Callaghan free got the League Champions within a point.

Niall Cronin’s side also got forward for a couple more goal chances but they left their scoring boots at home with Ronan Joyce having a shot blocked when released by Brian Stynes.

For the following few minutes the teams exchanged scores with Naas attempts from Callaghan and Griffin being cancelled out by a brace from the bang on form Fogarty.

As a result St.Laurences maintained a 0-6 to 0-5 lead which was extended with the score of the game as despite being under fierce pressure from Eoghan Bateman sharpshooter Fogarty powered over a point with the outside of his right on the endline.

Griffin and Callaghan missed frees afterwards and Larries looked set for victory when the experienced Barry Mackey gave his side a three point buffer approaching the final few minutes.

Adam Steed who scored five goals in the two meetings between the sides in 2018 was in on goal in the 52nd minute but a fine stop from Barry Reynolds kept Naas’s slim hopes alive.

Callaghan and Brian Byrne had Naas within one entering stoppage time but when Brian Kane screwed a shot wide any hopes of a draw seemed to be gone.

Fogarty was a thorn in Naas’s all day long and he sealed a crucial victory for Larries with his seventh point after a long free from Padraig O’Neill found him in space in a result which puts Naas in grave danger of early elimination.