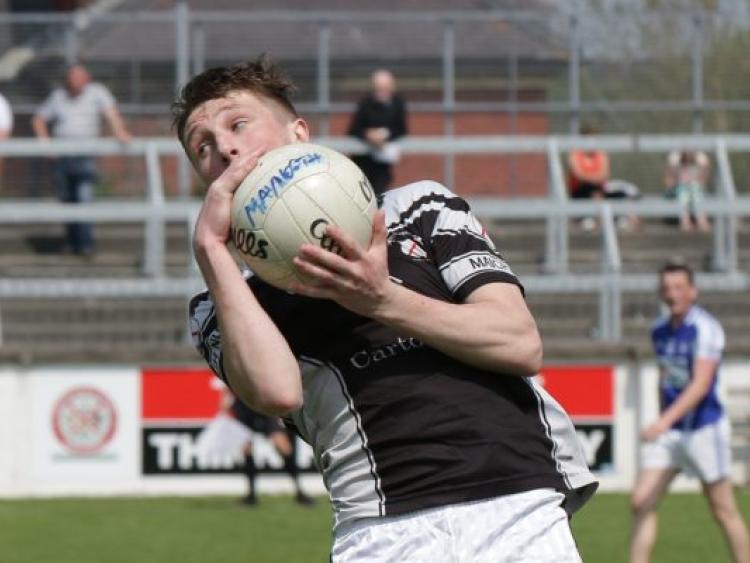 Maynooth rubberstamped top spot in Group 2 of the Senior Football Championship with a one point victory over Castledermot on Saturday afternoon.

Maynooth looked in a degree of trouble when trailing by two points at the break but for the second game in a row they produced a stirring second half to turn things around.

Neil Flynn and Mark Donnellan were once again their main scorers in chief while the return of Danny O’Sullivan gave them an extra dimension.

A converted 50th minute penalty for Castledermot from David Keating gave them a lifeline but Maynooth had the class to see out the game.

The result remarkably sees Naas now ruled out of contention for the rest of the Championship and after two losses in a row they must now face up to a battle against relegation.

Fresh from a victory over League Champions Naas a fortnight ago Castledermot were quickly into their stride with two early points as the midfield pairing of Gavin Farrell and David Keating both got on the board with scores.

Maynooth got on the scoresheet with a 4th minute free from John McAndrew but in a tight and tactical affair Castledermot were keeping their noses in front as a Gavin Keating free had them leading 0-3 to 0-1.

Maynooth’s McAndrew followed up his earlier free with an excellent score from play with the outside of his left foot but again Castledermot in their organised fashion always had a response with both Gavin and David Keating pointing to maintain a three point advantage for Damien Hendy’s outfit.

Mark Donnellan was stationed at full forward for the second successive game and again he had a huge impact and he almost goaled in the 14th minute when he flicked on a dropping Danny O’Sullivan shot but he had to be content with a point.

Keating kicked a free from distance afterwards but points from Donnellan and O’Sullivan had Maynooth back to within a point entering the final few minutes of the half.

Neil Flynn was relatively quiet at that stage even though he fired an effort into the sidenetting.

Despite Maynooth’s big goal threat it was Castledermot who had a two point lead at the break after Keating kicked his fourth point of the half.

David Dooley pushed that gap out to three points when a goalbound effort was pushed over the bar by Odhran Cussen to make it 0-8 to 0-5 but instead of kicking on scoring only two points over the next twenty minutes heavily affected them.

Back to back Neil Flynn frees got the ball rolling for Maynooth and although Castledermot replied with a point from Keating, the Maynooth steam train was only getting into motion.

Six points in a row turned the tide in the North Kildare side’s favour as in similar fashion to the St.Laurences game they piled the pressure on their opposition.

Flynn contributed three to that devastating period with Kildare teammate Donnellan also getting a pair of points.

Kevin Dunne got in on the act too and if he was more clinical he would have had a goal aswell when he had a palmed effort well saved by Shane Nolan.

Castledermot did get a lifeline entering the final ten minutes however when an Emmet O’Keefe pass found Paddy Whelan and after breaking clear the forward fouled in the square and a penalty duly awarded which was dispatched by David Keating.

The converted penalty got Castledermot back to within a point of Maynooth before Flynn and Dan Gray exchanged efforts.

Successive points from Bankole Agunoye and Danny O’Sullivan edged Maynooth back three ahead but Castledermot again responded with scores from Keating and Paraic Murphy with both coming from frees.

Castledermot even had one last chance to snatch a draw when Gavin Keating stood over a 45 but when he dragged his shot wide the game was up but unlike in Naas’s case it’s not fatal as Maynooth look ahead to the Quarter-Finals.