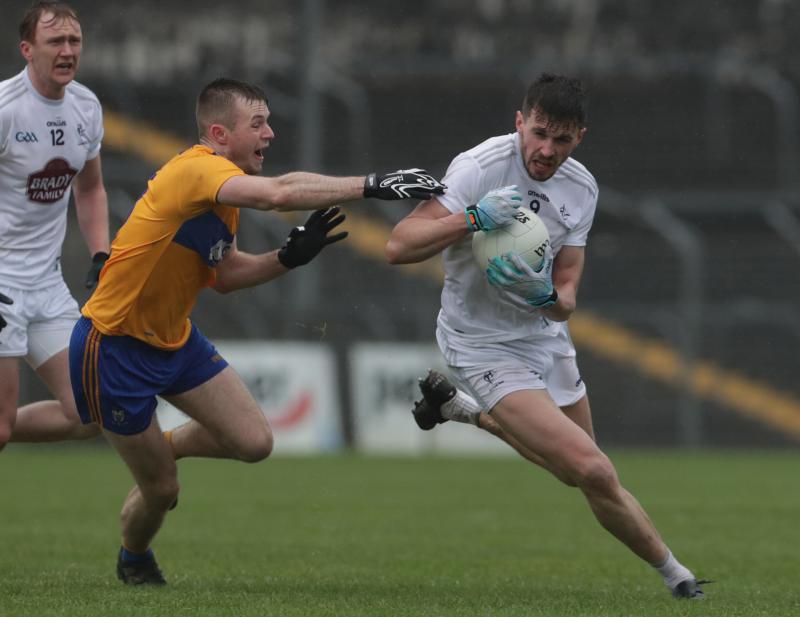 In some ways the dark and dreary weather in Ennis on Sunday afternoon summed up the Kildare performance as a resurgent Clare took a one point victory.

After losing to Westmeath in their opening game Clare were like coiled springs and they took advantage of their opponents uncertainty to claim the victory.

The Banner are without the likes of Gary Brennan and Jamie Malone this term and that's what will frustrate Kildare the most in that they couldn’t put a depleted Clare team away.

Kildare led for periods of the first half but could never kick on and eventually the loss of Paul Cribbin temporally (Black Card) and Paddy Brophy permanently (Red Card) scuppered their chances of taking home the points.

It was an incredibly indisciplined Kildare display where they received 10 cards in total and it’s something they will have to improve on for the rest of the campaign starting with Armagh on Saturday.

Kildare started well with an opening minute Neil Flynn free before Clare responded with a Keelan Sexton point from play.

Kildare with the aid of a strong breeze in the opening period then kicked on with three points in a row from Flynn, Paddy Brophy and a wonderful individual effort from Jack Robinson.

Niall Kelly and Gearoid O'Brien then exchanged scores before a Banner brace from Sexton and Eoin Cleary left just a point between the sides.

Paddy Brophy with his second of the half soon pushed that lead out to two points but after Paul Cribbin got a Black Card in the 32nd minute Clare went into the break level at 0-6 apiece after Cleary and Sexton improved their tallies.

Kildare started the second half in style with a couple of quickfire points from Kevin Feely after good work for both by clubmate Niall Kelly.

Clare weren’t going away though and after a brace from O'Brien levelled the game the Banner roar could be heard in full voice when Cleary put them into the lead for the first time in the 51st minute.

Feely replied with a free but minutes later Paddy Brophy was sent off on a second bookable offence and Kildare’s challenge really suffered as a result.

Clare kicked on with Sexton converting two fine attempts from play and there was two points in it entering the final few minutes.

Kildare had their chances though with sub Adam Tyrrell missing the target on a couple of occasions before Feely kicked his fourth point of the game.

Four minutes of added time were then played but Clare's cynical approach in the final few minutes slowed Kildare down and the hosts held on for an 0-11 to 0-10 victory.