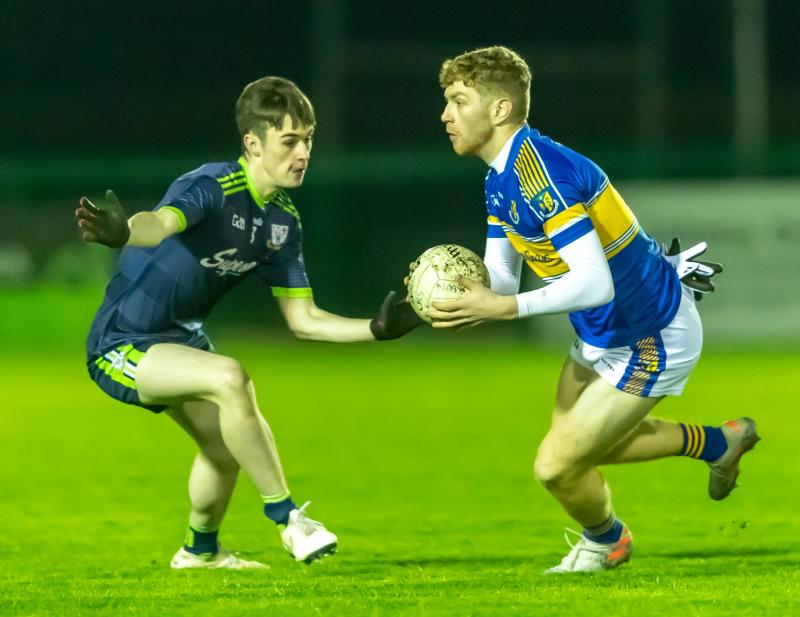 Naas CBS maintained their quest for three Br.Bosco Cup titles in a row after they ran out five point winners over Moate in the Quarter-Final on Thursday Evening.

It’s a scoreline that flatters Moate as the Kildare School were dominant for the majority of the game and it was only in the final few minutes that Moate got much of a response.

Naas were brilliant in the opening period and even more so when you consider Moate were ultra defensive in their tactics as the Leinster Champions held an eight point interval lead.

Naas weren’t as good in the second half and they only scored four points but the hard work had already being done with the likes of Alex Beirne and Sean McLoughlin scoring heavily.

The opening score of the game came within thirty seconds of the start with Thomas Dunning knocking over a nice point on the turn for Moate.

Naas faced with 15 men behind the ball at stages had to work their way through the Moate puzzle and they did in style with three points in a row giving them the lead after Drew Costello from play and Sean McLoughlin with a pair of frees found the target.

Moate hit back with a free from  Adam Donoghue but it was at this stage that Naas hit on the afterburners.

A flowing move where Simon Murphy and James Dalton exchanged passes almost ended in a goal but Dalton saw his blasted effort rebound off the post.

Naas weren’t deterred though and between the 13th and 32nd minutes they scored eight points on the trot.

Alex Beirne was very much to the fore in this period getting four points with McLoughlin, Dalton and Sam Morissey also getting on the scoresheet.

Jack Keenan then kicked a stoppage time point for Moate but trailing 0-11 to 0-3 they had a mountain to climb in the second half.

Naas didn’t step off the accelerator either and they kept coming at their Westmeath opponents in the second half with Paddy McDermott joining Dalton in going close for goal when hitting the bar.

Paddy Kelly had a shot stopped on the line in the same move before McLoughlin finally pointed and in quick succession Beirne then followed up with a brace of points.

Moate to their credit rallied strongly  in the final ten minutes with points from Keenan, Tobby Conteh and Alan Malynn.

By the end Moate got back to within five points after Owen McCabe kicked in a deflected stoppage time goal.

Still though Naas were relatively comfortable victors and with plenty to improve on they can look forward to a Leinster Semi-final in three weeks time against Marist of Athlone.