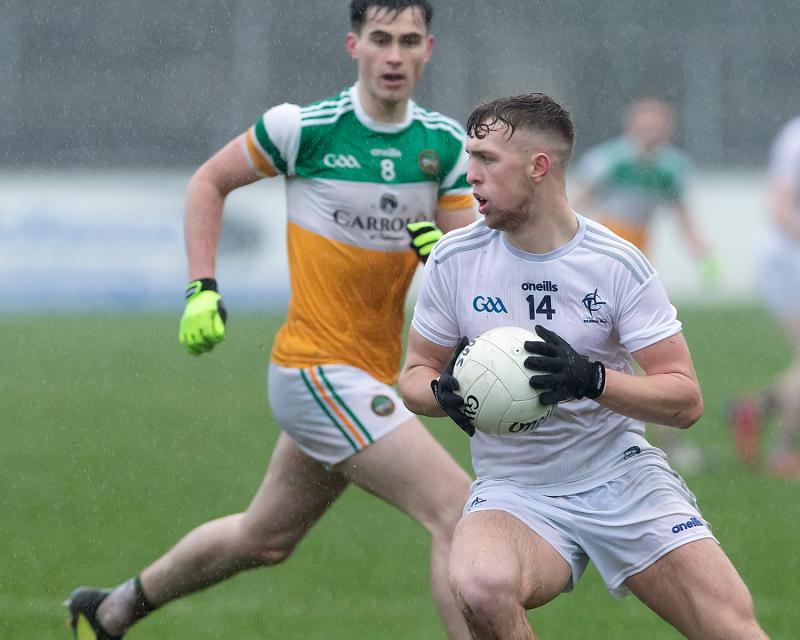 Shane O'Sullivan spins clear from the in rushing Bill Carroll of Offaly during the Leinster U20 Football Championship game played at St Conleths Park, Newbridge

In weather that was practically unplayable Kildare struck at the death to claim a one point win over Offaly in the Leinster Under 20 Football Championship.

Paddy McDermott was the Kildare hero with his stoppage time point getting Gay Campbell’s charges over the line.

While McDermott got the winner in the end, it was really the overall impact off the bench that helped Kildare turn the tide with Alex Beirne, Mark Grehan and Findlay Nairn all having a huge impact.

In truth it’s a result that was extremely fortunate as Offaly led 0-6 to 0-2 at the break and if it wasn’t for Shane O’Sullivan’s wonder goal in the 42nd minute the result could have been very different.

If Offaly are annoyed at the result they should be doubly incensed as to how the game got the go ahead at all with puddles of water splashing up on players throughout and the pitch certainly looked unplayable and in a knockout Championship game it all seemed pretty unfair.

Referee Maurice Deegan was happy with things though and he gave it the go ahead but the spectacle certainly suffered as a result.

Kildare actually dealt with the conditions fairly well in the opening ten minutes and they went two points clear after a free from Shane O'Sullivan and a point from play by Luke Griffin.

That was as good as it got in the opening period for the hosts however as Offaly dealt with the conditions much the better.

Late entrant to the team Jack Bryant was a real nuisance for the Kildare defence and the pacy forward had the sides level when knocking over a brace of points.

He then brought his tally to three points in the 20th minute and with Kevin McDermott and Sean Courtney also scoring Declan Kelly's men moved three points clear.

Kildare were their own worst enemy for parts of the half though with their handpassing game reguraly coming undone.

At the break they had a four point deficit to make up after Sean Courtney extended the Offaly advantage leaving them 0-6 to 0-2 ahead.

Given the weather and the team performance Kildare looked to have it all to do on the resumption but they came out firing.

Shane O’Sullivan had been pretty quiet until he burst on to proceedings in stunning style in the 38th minute when great work from Paddy McDermott released the Clane attacker and although a point was there for the taking he had no interest whatsoever and instead blasted a shot into the top corner.

One would have thought that would have inspired Kildare but it never really happened with Jack Hamill getting a black card after he dragged down Bryant when he bore down on the Lillywhite goal.

Lee Pearson also had a great chance for a goal but Cian Burke produced a fine save and if the net rattled at that stage it could have been curtains for Kildare.

Kildare rallied from that point onwards with three of the next four points.

Alex Beirne and O'Sullivan got Kildare within a point and while Offaly hit back in the shape of an excellently converted free from Courtney the home side kept coming.

O'Sullivan knocked over his third free and while he missed two subsequent efforts which both hit the post Alex Beirne did draw the teams level entering the final few minutes.

Offaly still had a couple of late chances to get the win but both Courtney and Cormac Delaney squandered efforts at goal and Kildare made them pay.

The clock had just ticked into stoppage time when Paddy McDermott soloed down the far sideline and the further he went the further away he went of any challenges and the Naas CBS star showed immense coolness to stroke a shot between the posts.