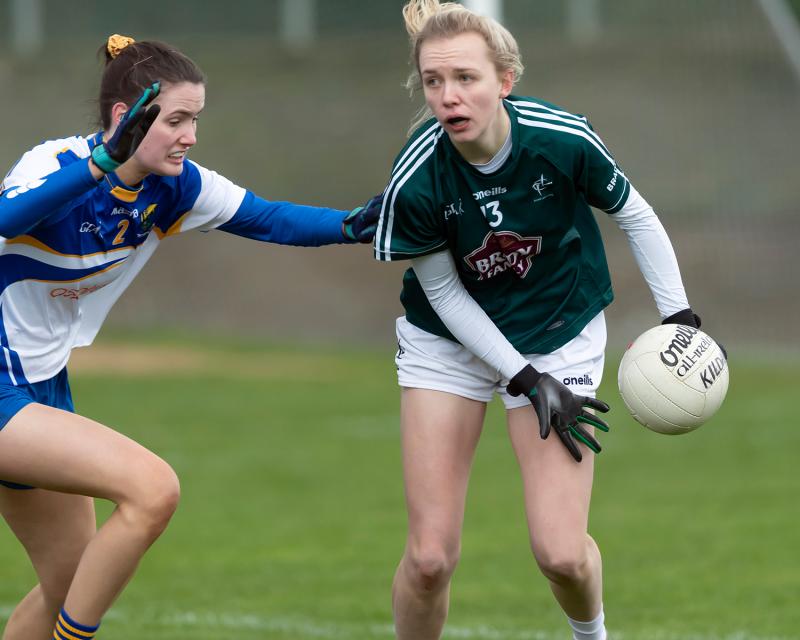 The Kildare Ladies made it three wins from three in the Lidl National Football League after proving too hot to handle for Wicklow at a bitterly cold Manguard Plus Hawkfield.

Playing with the aid of a stiff breeze two opening half goals from Neasa Dooley gave Kildare a cushion that they were able to hold on to for the whole game.

The Castledermot star finished with 2-3 in a game that will also be remembered for marking the inter county returns of former captains Erica Burke and Roisin Byrne.

Kildare now sit joint top of the table with Down and a promotion bid is very much in their sights.

Despite playing with a gale at their backs Kildare were extremely slow out of the blocks and if Wicklow were more clinical they could have been in big trouble.

Laura Hogan got the opening point for the Garden County but she also squandered two earlier chances while Kildare keeper Mary Hulgraine did well to save a shot from the Wicklow attacker onto the post.

Kildare eventually woke from their slumber with Niamh Sinnott firing a shot off the woodwork before Neasa Dooley opened the home side’s account with a point from play.

Kildare didn’t look back from there and tallied 2-3 on the trot with Dooley getting both goals after great build up from Erica Burke and Niamh Sinnott in both.

Dooley, Aoife Rattigan and Joanne Deay then duly added on points as Kildare went into a 2-4 to 0-1 lead.

It could have been an even bigger margin as Dooley and Lara Curran went close with goal chances.

Afterwards the weather took a remarkable turn with torrential rain, wind and hailstones over the following ten minutes that made conditions incredibly difficult for the players.

When it eventually settled down Wicklow staged something of a revival with a deflected Amy Murphy goal and a point from Jackie Kinch getting the visitors within touch.

Kildare finished the half in stunning style though with League top scorer Lara Curran pointing before Roisin Byrne on the field for the first time in 18 months kicked a brace as Daniel Moynihan's team went into the break with a 2-7 to 1-2 lead.

The action was a lot less hectic in the second period but playing against the wind that certainly suited Kildare.

In the opening fifteen minutes there was only two points with Louise Scilly and Niamh Cullen exchanging efforts.

Byrne was a big threat on her Kildare return and she had a goalbound effort tipped over for her third point while Curran doubled her total to put the victors ten points clear.

Moorefield’s Mark Murnaghan is the Wicklow boss and fellow club men Niall Hurley Lynch and Seamus Fingleton are involved in the back room team and they would have been happy with their sides finish after Laura Hogan kicked over a trio of frees and Meadhbh Deeney scored well from distance.

Conveniently Dooley rounded off Kildare’s scoring with a fine point into the wind late on as the Lillywhites saw out a relatively comfortable success.