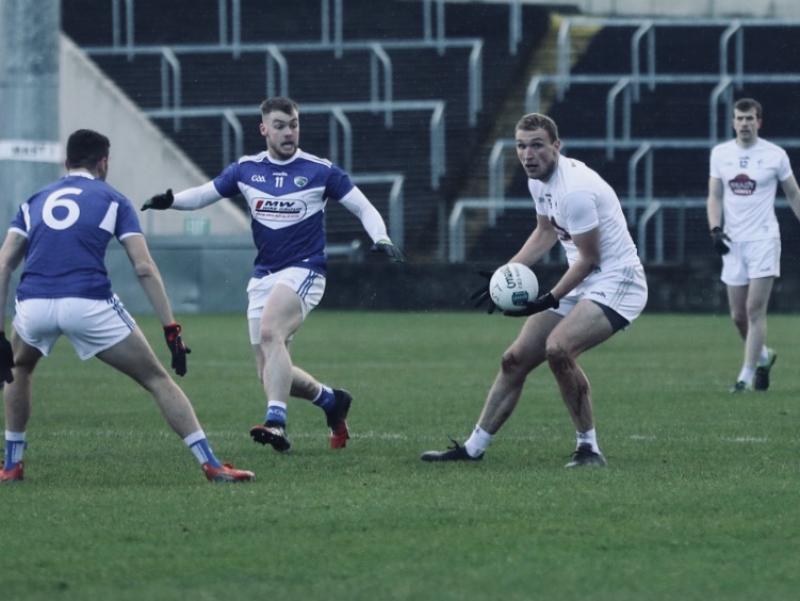 Kildare did the majority of the damage in the opening half as they held a double scores lead and if it wasn’t for wasteful shooting the margin would have been even greater.

Kildare’s increased work rate was very noticeable in the forward line in particular and with the midfield duo of Tommy Moolick and Kevin Feely dominating as well as Niall Kelly, Paddy Brophy and Adam Tyrrell impressing in attack Kildare ran out deserved winners.

While Kildare aren’t out of the relegation woods just yet its a big result for them with two home games still to come against Cavan and Westmeath.

Laois will have been very disappointed with their own performance as they were never really at it but in a topsy turvy Division they aren’t out of the promotion race yet.

Inspired by the threat of relegation and the sight of their near neighbours Kildare powered out of the blocks and were four points up inside the first five minutes.

Paddy Brophy got the scoring underway with an effort from a tight angle after good play from Shea Ryan and Paul Cribbin before Cribbin himself kicked a fine brace of scores.

Adam Tyrrell played a key role in both the Cribbin efforts and he duly got on the scoreboard to round off an exhilarating opening from the Lillywhites.

Laois eventually got on the board with a 15th minute Evan O’Carroll free but after Daniel Flynn was bizarrely pulled up for overcarrying when taking a mark Tommy Moolick restored the four point buffer in the next play.

Niall Kelly and Sean O'Flynn then exchanged points before Laois had a fine chance for goal when  Eoin Lowry broke forward but Mark Donnellan stood tall to make a good save.

Kildare were in fine form all over the pitch at this stage and points from Kevin Feely and Liam Power had them holding an 0-8 to 0-2 initiative.

Laois got the last two points of the half with Evan O'Carroll on the double and after kicking eleven first half wides Kildare would have been wondering how they were only 0-8 to 0-4 ahead at the break.

Kildare could have pushed that lead out to five in the opening minute of the second half when a quickly taken scoreable free from Adam Tyrrell fed Daniel Flynn but with the goal gaping the Johnstownbridge man mishit an effort and Laois survived.

Paddy Brophy increased the Kildare lead in the 42nd minute before Laois got a bit of momentum going with goalkeeper Niall Corbett landing a long distance free and the Midlanders left a couple of goal scoring opportunities behind them aswell with Donnellan saving a weak attempt from Colm Murphy and Laois full back Mark Timmons had a goalbound attempt blocked by Kevin Feely.

After those two missed chances Laois’s challenge faltered and Kildare kicked into overdrive with four points on the bounce with Tyrrell kicking a trio of scores and the corner forward also set up Kevin Flynn as Jack O'Connor’s men went eight points clear.

Laois did rally in the final quarter with Corbett, Brian Byrne, John O'Loughlin, Kieran Lillis and Evan O'Carroll all pointing but without a goal they were always likely to fall up short.

Brophy and Neill Flynn then rounded off the scoring for Kildare in the final minutes as they eased to a five point victory.