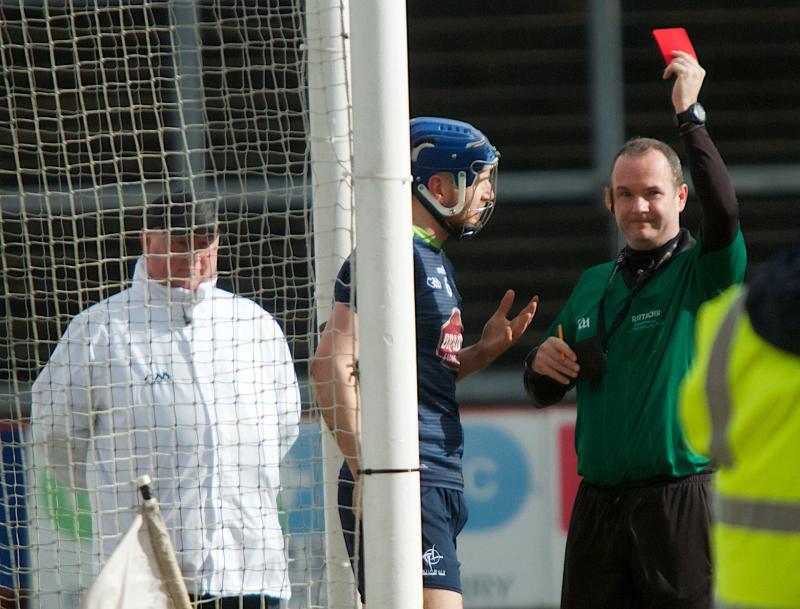 Allianz Hurling League Division 2B Round 5

Derry will face Down in next week’s Division 2B hurling final after snatching a draw against Kildare in
a thriller.

Despite winning all of their four other league games, John McEvoy’s men went into the match
knowing they had to avoid defeat if they wanted to reach the showpiece, given their inferior points
difference to both Kildare and Down.

The first half was a tale of two marksmen as Jack Sheridan and Cormac O’Doherty dominated the
scoring charts.

Despite playing into the wind it was Kildare who were largely in control until the 24 th
minute when Ross Kelly was dismissed for an off-the-ball hit on Meehaul McGrath.

In the second half, Sean Cassidy won his battle with Sheridan – with the added protection of
sweeper McGrath – to quell the threat, but each time the Oakleaf looked to pull away, their resilient
opponents came back.

In fact, Sheridan thought he had booked the Lilwhites’ place in the final with a late free, but with just
seconds remaining Conor Kelly as the coolest and bravest man in Celtic Park to score the biggest
point of Derry’s season so far.

Kildare opened the scoring after two minutes when a loose pass was cut out by James Burke who
spotted Jack Sheridan one on one at the back against Sean Cassidy. The Oakleaf skipper opted to
commit the foul 30 metres out, with Brian Byrne supplying the finish.

There were then two minutes of madness as Paul Divilly passed up a chance at goal when he took
raced clear of Meehaul McGrath, but he took too long and was bottled up by Cassidy and the
recovering McGrath.

From the clearance upfield, Simon Leacy regained possession but played a weak pass back to his
goalkeeper which was cut out by Richie Mullan, and he squared for Cormac O’Doherty to finish to
the net.

It seemed just what Derry needed after a start that saw them struggle to find any rhythm, but their
opponents responded immediately from the puck out. Caolan Smith linked up with the dangerous
Sheridan who managed to power the ball under the body of Sean Kelly to put his side back in front,
1-1 to 1-0 after eight minutes.

Sheridan had the ball in the net again on 13 minutes in controversial circumstances when he
collected another long ball into the square. He was surrounded by three Derry men and appeared to
be charging but referee Kevin Brady let it go as the Naas clubman threw the ball in the air and
somehow flicked it to the top of the net.

A Sheridan free put the Lilywhites in firm control at 2-2 to 1-0 but Eoghan Cassidy responded on a
rare Oakleaf attack with a quick turn and strike before O’Doherty knocked over his first free with the
help of the inside right post.

He then produced a free of the highest quality on 18 minutes as he
struck over from inside his own ’45, hugging the sideline.

Sheridan (free) and O’Doherty (’65) added to their tallies before the game took a real turn on 24
minutes when Ross Kelly threw an elbow into the midriff of McGrath off the ball and duly received a
straight red – with O’Doherty adding the free as further punishment to reduce the gap to the
minimum.

A Sheridan ’65 and another O’Doherty free made it 2-4 to 1-6 before the Slaughtneil man levelled
matters for the first time on 33 minutes.

It was the visitors who went in ahead at the break, however, when Divilly found Caolan Smith in
space and he slotted over well on the spin 40 metres out.

The second half picked up where the first left off as Sheridan was denied a hat trick two minutes in.
Burke got the better of McGrath to flick the ball into the forward’s path but as he bore down on
goal, Sean Kelly produced the save.

The home side were level on 42 minutes when Cleary played a nice pass inside to substitute Odhran
McKeever who flicked it skilfully between the sticks over the shoulder, with Cathal Dowling
immediately responding.

Another burst of heavy rain made it difficult again for both sets of players, and as an O’Doherty free
drifted wide and short, Se McGuigan picked up the scraps to even matters again on 45 minutes – 2-6
to 1-9.

Derry took the lead for just the first time since their early goal two minutes later when Cleary added
his name to the scoresheet before a James Burke point came between two O’Doherty frees.

Kildare captain Brian Byrne hit his first free since the opening score before another minute of
madness just before the hour. O’Doherty found McKeever who spun away from John Doran too
easily and finished to the net, but less than 30 seconds later McEvoy’s men handed Kildare a lifeline
as a Byrne shot somehow looped over Kelly and found the goal.

Caolan Smith, Steafan McCloskey, O’Doherty (’65) and Sheridan (free) all converted scores before
the latter produced a monster effort from a midfield dead ball to even matters at 3-11 to 2-14 with
four minutes remaining.

Against all odds, Kildare then took the lead as referee Brady penalised Darragh McCloskey for a foul
hand pass on his own 45, and Sheridan’s swerving shot snuck inside the right post – 3-12 to 2-14.

O’Doherty settled his team with a driving effort from 60 metres as the game entered four minutes of
added time, with only Odhran McKeever in the Kildare half.

Sheridan thought he had won it for Kildare with a free, but Derry booked their place in the final at
the death when Conor Kelly bravely swung it over after a driving run from Brian Og McGilligan.