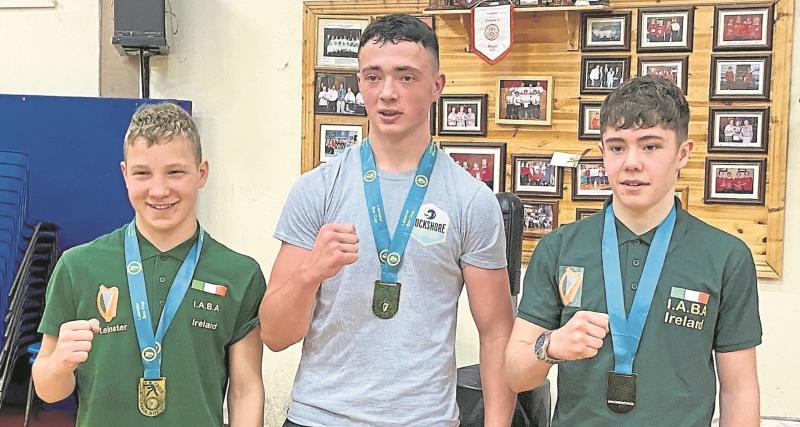 Fr Flanagan Boxing Club (Ballymore Eustace and Hollywood) had a very busy start to 2020 and despite the club now being temporarily closed during the current Covid-19 restrictions, the club can look forward to further success in the year ahead, and beyond, with a good crop of youngsters coming up through the ranks.
The futurecertainly looks bright for Fr Flanagan's when things get up and running again, hopefully soon.
“We began the year with the National U18 championships, where Darragh Gilroy reached the quarter finals of the welterweight division beating European bronze medalist Taylor Guiney of Drimnagh,” said head coach Sean Murphy.
Gilroy performed brilliantly in the quarter finals losing on the narrowest of split decisions to the two-time European medalist William Hayden.
The club also had great success in the Leinster Multi-Nations Box Cup with Adam Farrell (middleweight), Dan Murphy (52 kg) and Brian Gilroy (54 kg) all talking home gold in a competition that included clubs from Leinster, Munster, Lithuania and Poland.
Head coach Murphy added that “in early February, we witnessed some superb performances in the Michael Andrews competition, as Danny Duffy and Sam McStay both took home silver. There was also a top-class performance from our reigning Irish champion Glen McStay winning all three rounds to take gold".
Fr Flanagan’s BC was internationally represented when Brian Gilroy, captained a Leinster team in Rostock Germany in a multi nations box cup.
Brian boxed exceptionally well to win gold against tough German and Ukrainian opponents and as captain of the team also accepted the best team trophy on behalf of Leinster.
Many of the club's boxers took home medals in the Kildare championships: Joshua Balfe, Brian Gilroy, Dan Murphy, Danny Duffy, Kayden Healy Maguire, Glen McStay, Sean Gallagher, Aidan Gilroy and Sam McStay which was a great achievemen.
Sean added: “Unfortunate-ly, both our international representatives Dan Murphy and Brian Gilroy bowed out in the quarter finals of the National Cadet Championships against top class opposition. Both lads bounced back with great displays in the Leinster Championships - Dan taking home silver in the Youth 1 52Kg and Brian taking gold in the Youth 1, 54 Kg.
“There was further success in the Leinster Championships as our 70kg representative, Joshua Balfe, earned a well-deserved gold medal in the Youth 2 division after excellent performances in the semi-final and final.
“We look forward to our Leinster champions representing Fr Flanagan’s in the All-Ireland champion-
ships in the future.”