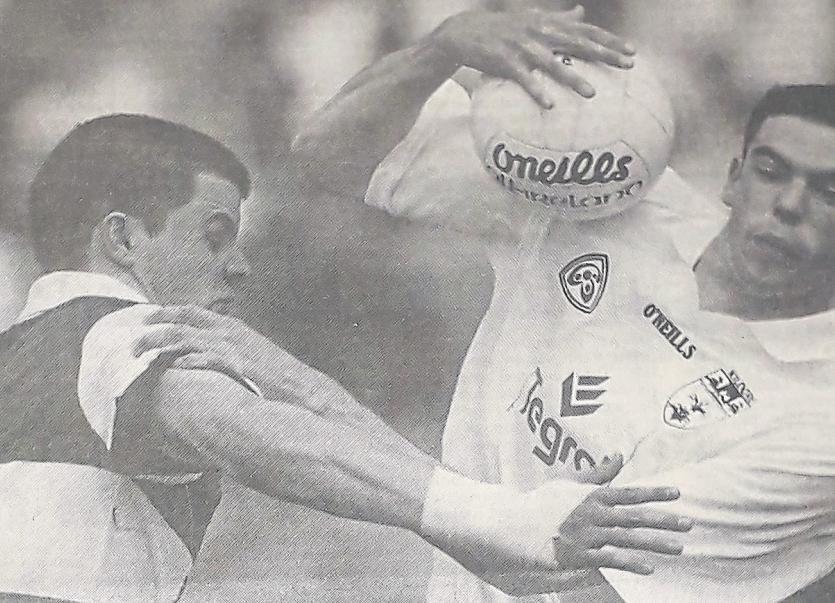 Dermot Earley gathers ahead of Derek Conway of Laois

In the end it was easier than anybody had dared to imagine. Kildare came through the Leinster SFC semi final at Croke Park, with a highly impressive performance on Sunday (July 19, 1998).
To be brief their chances of winning their first Leinster title since 1956 have never been better.
They scored almost at will from play and this was an area which some observers felt might be a weakness.
The opposition was poor, and this is a point that must be made, but Kildare demonstrated that they are well capable of scoring.
By the end of the what had denigrated into a lopsided game, five of the starting forwards had scored from play and Pauric Brennan, a good replacement for the injured Martin Lynch, picked up where he stopped off in the league with two points.
Laois found the going much more difficult, They could muster just three points from play and this after substituting three players. On Sunday they learned that they still have much to learn.
They were beaten long before they finished the match with thirteen players because the injured John O'Reilly followed the dismissal of Denis Lawlor (for a second bookable offence) off the field late in the game. At the time Laois had used all three substitutes.
Their problems began at the back where their full back line had no answer to Kildare especially Karl O'Dwyer, whose roving commission was successful.
He was outstanding and gave Eamonn Delaney, Laois captain, as difficult a time as Martin Lynch did a year ago.
Apart from his three points from play, O'Dwyer worked hard all over the field.,
Martin Lynch won a succession of ball in the first half. Time and time again he was first out before laying it off.
Padraig Gravin scored a fine goal in the second half and worked hard throughout.
Dermot Earley again lent an effective hand in the middle of the park where Kildare dominated from the outset.
Laois got the first two scores of the game, and could add just a couple more before half time.
Stephen Kelly converted a free and the former minor star added a point in the 7th. By the 15th minute Kildare were back on terms with a free from Gravin and a point from play by Eddie McCormack.
Gravin was to convert a very difficult free near the sideline in the 17 minute and a superb score from Lynch, which started deep in Kildare's defence, gave them a two point lead.
Laois didn't score for a full 17minutes and when they did it was just a point answered by two more from O'Dwyer and Gravin.
Kildare led 0-8 to 0-4 at the break and were considerably less wasteful. By the half way stage Laois had notched up no less than nine wides while the winners had just one.
The Lilywhites had many more wides in the second half, eight in all, but this was more a reflection of their dominance than poor shooting.
As if things were not ominous enough for Laois at the interval matters got worse as they had to face the wind in the second half. It took Kildare a little time to find their rhythm at the start of the second half just as it did at the outset.
In the vacuum Michael Lawlor tapped over a free. It was a start but Laois needed much more and the muted reception his score elicited told us as much.
Kildare continued to make optimum use of the ball. Dermot Earley scored with their very first attack of the second half, and a Kildare win was looking all the more likely when Padraig Brennan pointed with his very first kick.
They were much more focused than their opponents as illustrated by their ability to take their early scoring chances in the second half.
Kildare were five points clear by the time Laois scored again and it came from a Michael Lawlor free.
Nevertheless he followed it up with a wide as wasteful Laois did not avail of the opportunities which came their way. By now they had withdrawn two forwards but the out of sorts David Sweeney remained as they tried to recall how they defeated Westmeath to get this far.
Then disaster struck in the form of a Niall Buckley free which touched a Laois hand or two along an otherwise unobstructed path to the net. Six minutes afterwards Padraig Gravin did well to slot the ball past Fergal Byron.
The game had ended before Buckley's goal because Laois never looked likely to find a way to neutralise Kildare's physical strength, they were out of touch at midfield and their forwards were not good enough. But once his goal went in Kildare could begin thinking about a Leinster final meeting with Meath in two weeks.

Final score: Kildare 2-13 Laois 0-8.
There was not a single poor performance by the Kildare players but Willie McCreery was the best overall figure because of the consistency of his effort all over the field. Karl O'Dwyer ran him close because of three kicked points and his work rate in different areas of the park.
Apart from their ability to score from play Kildare proved they have strength in depth up front. Padraig Brennan played very well when he came on.
Cathal Sheridan, the winner of All Ireland minor and U21 medals with Meath, also got his chance which was testimony to the ease of Kildare's success and Brian Murphy, Paul McCormack and Noel Donlon are also available.
If Lynch doesn't play, Brennan may start but Bryan Murphy ought not to be removed from the equation because he took no part in this game.

Kildare can look forward to the provincial final in two weeks time against Meath with a very well balanced team and a lot to look forward to, especially after 1997.