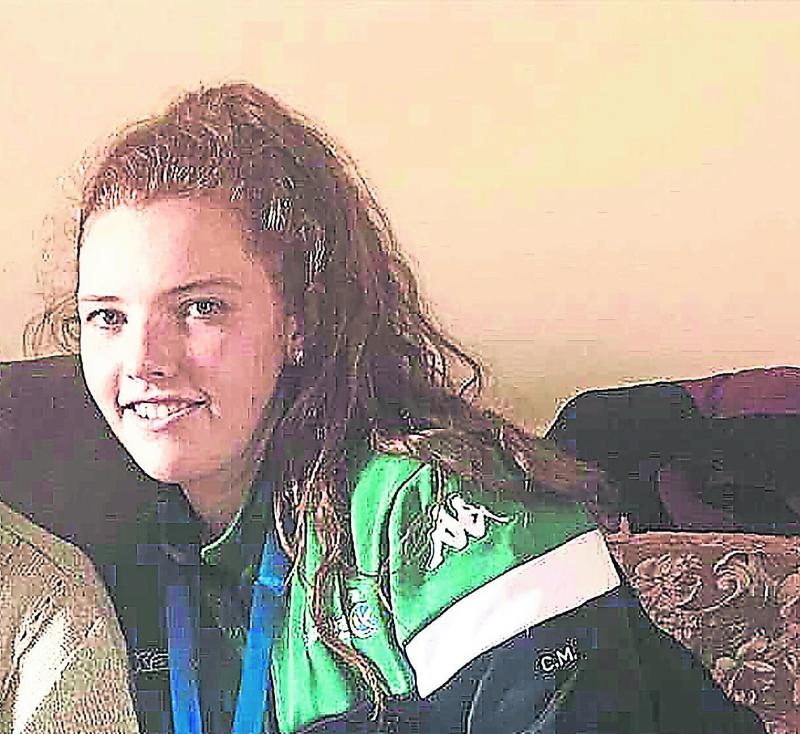 The last year for Monasterevin basketball star Claire Melia has been busy, to say the least.
Playing basketball for a division one college in Philadelphia, winning a National Cup with her club, the Portlaoise panthers, and fund raising for the “Do it for Dan” trust.
Raising over €9,000 of much needed funds for the cause, Melia shot a thousand free throws in one day in her back garden.
“It was a great cause. I love to do something to help Dan so I thought I’d set it up. Thanks to everyone who donated and helped me including the basketball community. It took an hour and a half so it wasn’t too bad.”
The Ireland international forward is staying sharp by doing shooting practice in her back garden, without access to training facilities. However basketball wasn’t always top of Melia’s list.
“Football would’ve always been my number one sport, I’m so happy when it comes back every year, the skills you come across, they help each other out. I didn’t really make a decision between football and basketball, things just worked out that way for me. I was playing senior football since I was 14.
“Our Europeans (basket-
ball) would’ve been in the summer after the fotball ended. We had football training and basketball, both on a Tuesday, so it was foot-
ball one night and basketball the next. We were lucky that our coach Peter O’Sullivan allowed us to do that.”
Melia started full forward for the Kildare Minor footballers in 2017, making it to the Leinster 'A' final, before losing out to Dublin.
Since the European Championships in 2015 and captaining the silver medal winning team in 2017, Melia received international interest.
“A few colleges contacted me since the Europeans in 2015, I was overwhelmed but didn’t take it seriously. However after some time, the exciting opportunities couldn’t wait any longer and in 2017 I visited the United States.
“ I went to Utah, visited St. Peter's in New York and St. Joseph's (Philadelphia) where I committed to.
“After returning, two weeks later I did my anterior cruciate ligament and the way my knee was, I decided to get the strength built back up at home and then I went to Blanchardstown Institute of Technology for a year.
“I was studying early childhood care and education in TU Dublin, I love working with kids, and coaching, and then in May 2019 I said I might as well try America and see what it is like, so I don’t have to any regrets. You know when you go somewhere and you have a feeling that you’re comfortable there on your own.
“Susan Moran was there, she went out there when she was 17 and so I knew I had someone that I could have an Irish conversation with.”
Susan is the only Irish player to play in the WNBA and is Director of Player Development at St. Joseph’s University in West Philadelphia.
“She knew what I was going through and she helped me a lot, her family was almost like my second family.”
Melia put up 23 points in her National Collegiate Athletic Association Division 1 debut. She returned home for good after a short spell with the St Joe's Hawks.
“ I came home at Christmas for two days I was lucky to get home at all. I felt like I was making myself go out to play and not really enjoying the game.”
To the Portlaoise Panthers delight they had their starting centre back in early 2020 to finish out the season. The National Cup final ended with Melia draining two free throws and her team victorious. When dealing with the pressure of that final game, Melia explained her cool approach “I wasn’t really over thinking anything.”
A sweet ending for a whirlwind season.
Currently without any sports to play she is looking forward to the future.
“Now I want to play here for the next two years and get my degree and then I’ll go play somewhere else if I’m lucky enough to get an offer.”