Johne Murphy, from Leicester Tigers to Munster, and beyond

Rathangan man Murphy recalls his exciting days on the rugby pitch, at home and abroad; not forgetting his GAA days with Ellistown 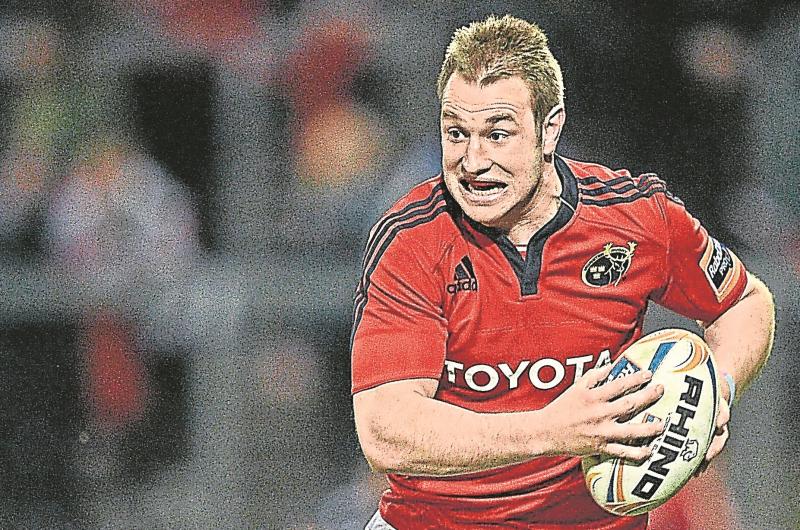 “Paddy was really ahead of his time in his thought process and it showed in the amount of what Leicester won under his tutelage; we got to the three major finals; won the Cup; won the Premiership and got to the final in Europe, it was the first time ever that a team from Europe had done a domestic double and were going for a European treble; I think he used nearly fifty odd players throughout that season.
“I played alongside some amazing guys such as Darren Gibson, Aaron Mauger, Lote Tuqiri, guys from all over the world; and the Leicester guys at the time such as Lewis Moody, Mark Parry, Paul O'Connell, Ronan O'Gara, those kind of guys and later in my career, Peter O'Mahoney, the experience you get from playing with those lads and now trying to transfer what I am doing at a coaching level with schools and clubs, in many ways it is priceless to what one learned at that time.”
Did you ever have an inkling from Leo Cullen back in your Leicester days that he would end up as Head Coach, and a brilliant coach, with Leinster?
“Not surprised at all, even back in those days you could see Leo was a born, a natural leader, so absolutely no surprise that he has progressed to where he is today.”
Overall injuries, considering the amount of rugby played, was relatively fortunate in that regard, although he recalls one injury that proved very disappointing.
“I was picked to play against Sarasans in the second last game of the European Cup, 2015, and I broke my hand in a training session on the Thursday and I was so cold at that time, I didn't even realise my hand was broken until after and that kinda of knocked me back a bit.
“I had a few opportunities to go elsewhere around then but I had a very frustrating final year in Munster and I was a bit drained from it and I really felt that the offers I had did not necessarily feed the want and the drive to progress so I just felt it was time for me to jump out, unscathed, no major issues; my knee might flare up now and again but that was all.”
That knee injury did flare up again, only last September, ironically when lining out for Ellistown GAA's second squad.
“It was a game (Reserve) against Sarsfields in Ballykelly in late August, early September last year, and Tom O'Loughlin and all the lads were playing, it was like we were back in 2003 and 2004 but unfortunately our bodies are not able to take what it was in the past but I was forced off with a knee injury; I had to go for a scan but it was fine, just needed a few weeks rest; but you have to get back out with the lads and enjoy all that.”
Incidentally the aforementioned John O'Loughlin recalls Johne playing Gaelic in his earlier days.
“He (Johne) only knew one way to play Gaelic and that was to put down the head and head for the goals” adding “ he had the ability to shift players out of his way, that were bigger and stronger looking but he had that great strength in his body always” and he (John O'Loughlin) adds laughing “knew how to use it.”
When Johne was reminded of that his reply was “ye and I still thought I could do the same playing for Ellistown last season, but I soon realised what I could do a fair few years ago I was not able to do last September, as my knee duly gave way, but no matter.”
So what did Johne Murphy do when he decided it was time to leave Munster?
“ I did some playing/ coaching with Naas in the AIL and then went into St Mary's School in Rathmines, I was working with kids of all ages, skills developments from 4th class up to 6th year; then progressed doing my coaches badges and linked up with Newbridge College and really enjoyed that, just so unfortunate we did not get to play either the Junior or Senior Cup finals.”
So what now?
“I would love to give coaching a full whirl, I probably will if I continue my development like the way I have, I put myself in the sphere in the next couple of years, hopefully get a few pro-gigs, I'd much rather be 42, 43, have been sacked from somewhere than being 45 saying, sure I could have done that; that's the way I am.
“I do really enjoy the development aspect of it; I do like to be able to see how the age groups I deal with, how they grow and progress, like the way the Newbridge lads performed against St Michael's in that schools semi final, great satisfaction from that, and hopefully I will be more involved coaching in that way.”
Married to Kate, they have a three young children, eldest is 4 and with twins (just gone 2) Johne admits that they as a family are a small bit away from moving (away) but “we will be keeping our ear to the ground and see what develops, but look it might never happen, still I will put my name out and we see what comes along.”
A keen golfer (Jamie Stafford of Newbridge Golf Club is my cousin) Johne adds “I don't have too much free time but I will certainly be going back to Newbridge to play soon; a great club; a lot of hard work has been put into it.”
So from that day he had that discussion with his mum about heading to Leicester, and while readily admitting he was never a shoe-in starter, he has certainly packed a lot into a very successful career, we wish Johne and his family, all the best in the future, where ever that will take them.