Racing returns without any hitches at Naas 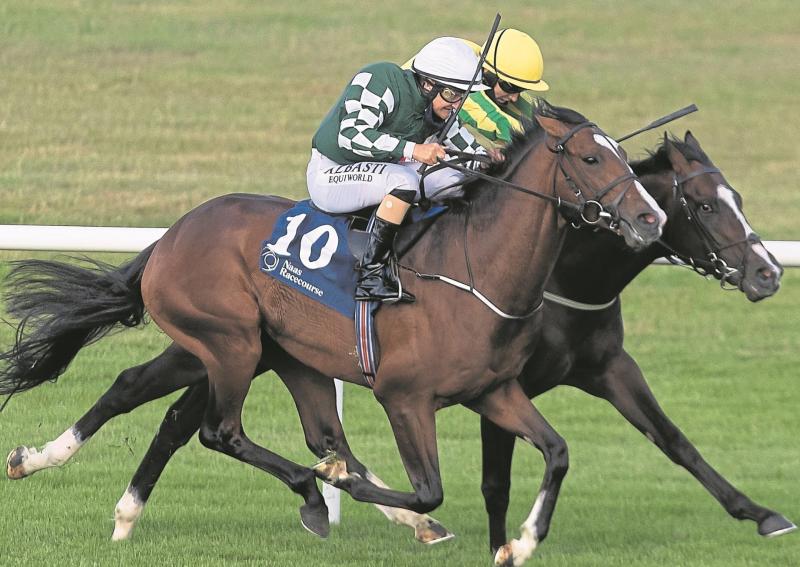 Racing has finally returned to these shores and on a sun-drenched afternoon at Naas yesterday, Tuesday June 9, the action, behind closed doors, showed that the industry showed (again) it is more than capable of holding successful, and safe racing, during these incredible tough times.

It was more or less back to where we were with the opening race of the day going to the Aidan O'Brien trained and Seamie Heffernan ridden More Beautiful, the first of a double for the due.

However it was Jessica Harrington and Shane Foley who stole the honours, Jessica recording an impressive treble with stable jockey Foley going one better clocking up a four-timer.

Foley's four-timer included the Listed Kuroshio At Compas Stallions Committed Stakes on board Punita Arora (22/1) for boss Jessica Harrington, who recorded a treble.

Seamie Heffernan and Aidan O’Brien shared a double with the very impressive two- and three-year-old maiden winners More Beautiful (11/4f) and Elfin Queen (13/8) but they all had to give way to Sceptical (3/1jf) as star of the show.

The Denis Hogan-trained four-year-old cruised to a three-length triumph in the Listed Anglesey Lodge Equine Woodlands Stakes under seven-pound claimer Joey Sheridan, Southern Horse proving best of the rest in what on paper, was as competitive a Listed affair as may take place anywhere this year.

A £2,800 purchase from Godolphin by owner James McAuley at Goffs UK in Doncaster just last August when still unraced, Sceptical has now landed four on the spin and banished any doubts about whether he could transfer his all-weather form to the turf in scintillating fashion.

Already rated the best sprinter in Ireland after just five runs prior to this procession, Hogan’s charge will now be aimed at Royal Ascot where he may well attempt the King’s Stand-Diamond Jubilee Stakes double.

“That was very impressive but we were expecting him to win” said Hogan. “We had to win if we were thinking of going to Ascot. He’s exciting. He’s by far the best horse we’ve ever had.

“When you think of it, he had only been winning a maiden and handicaps in Dundalk in the winter, you’d wonder how strong it was. But (it was) the way he’d done it, and you see what he could do at home.

“He worked in Charlie Swan’s gallop on Tuesday and I’ve seen a lot of horses come up there over the last 10 or 15 years and I’ve never seen anything like this. He powered the whole way up and (in) a frightening time as well.

“We probably will enter in both the King’s Stand and the Diamond Jubilee later in the week. He has an entry in the Greenlands as well back on Derby weekend so there’s plenty of options.

“James mentioned (the double) to me before the race, if he earned his entry fee at Naas he doesn’t mind spending it, so I’d say you’ll see him entered in both.”

While Sheridan was able to dictate from the front on Sceptical, Foley played his cards late on Punita Aurora in the first of the feature contests, producing his partner from well off the pace with a withering run over the top of the field to deny Alligator Alley by a length.

The Kilkenny native got off the mark in the Irish Stallion Farms EBF Maiden on the Harrington-prepared Lucky Vega (9/2), who showed signs of greenness mid-way through but was very brave to force his way up the inside of 4/6 favourite Lipizzaner, who could not make his experience advantage count.

The middle leg of the treble was provided by newly gelded Parkers Hill (18/1) in the second division of the Clinton Higgins Accountants Handicap, and young Warrenpoint conditioner Leanne Breen will be targeting premier handicaps in the wake of this easy win.

He made it a four-star day and bagged a treble for Harrington with former O’Brien charge Masteroffoxhounds (9/2) in the closing Irish Stallion Farms EBF Maiden for three-year-old colts and geldings.

The day’s other winner was former John Gosden horse Nordic Passage (14/1), Donagh O’Connor doing the steering on the top weight for Curragh trainer Johnny Levins in the first division of the Clinton Higgins Accountants Handicap.

Racing in Ireland continues this afternoon when Leopardstown host an eight race card, first off at 1 pm.