Newbridge kings of football, Moorefield sitting proudly on the thrown

A look back on the 2002 Kildare SFC final between champions, Sarsfields and arch rivals Moorefield 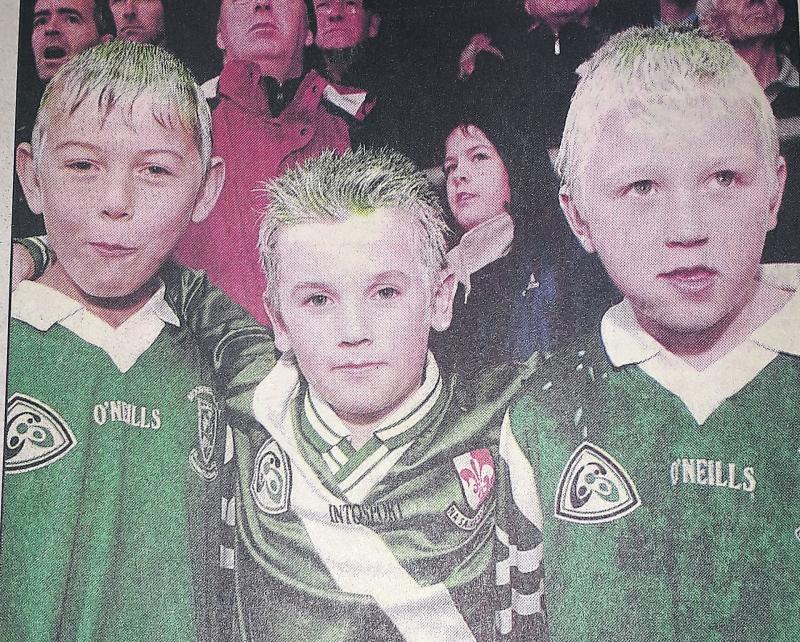 It was cold, wet and miserable, yet there was so much to admire with what was on offer from champions Sarsfields and challengers Moorefield in Sunday's (October 13, 2002) Senior Football decider.
Yes, I know, there were a lot of missed chances, some unlucky, some deplorable, a few hard to understand, but conditions, to quote one of the players, were deplorable; add in the tension, not to mention the pressure and you have enough ingredients to make it a lot easier to score sitting in the stand rather than on the field of play.
It was, however, a fascinating game, with individual duals taking place all over the field.
Take the two goalkeepers for instance. Pauric Canavan was a contender for Man of the Match. He was excellent. Within eighteen seconds of the start he was called into action when Morgan O'Sullivan came bursting through with a thunderbolt. The bank official stood his ground and managed to keep his 'safe' under lock and key.
At the other end young Gavin Slicker showed how athletic he is when just before the break he had to dive to his left to keep a ground shot from Michael Ryan from finding the net.
Slicker could be deemed a little unlucky not to get his hand to the ball from the penalty, although Roli went for direction rather than power from the spot. Two quality goalkeepers by any standards.
The Sarsfields defence was heroic throughout the game. Ziggy was a tower of strength on the edge of the square. Likewise his opposite number, Martin Ryan, proved not for the first time, there are few, if any, better no. 3s in the county.
Young Padraig O'Flynn is a stylish corner man while Dave Barry has had a marvellous season. Nigel Campbell was solid while Niall Hedderman had a mighty game on the wing. Liam Sex is Liam Sex, you need say no more.
Leslie Hogan and Padraig Brennan had a ding-dong battle. Padraig looked like he was going to beat Moorefield on his own in the opening period. He looked sharp, up for it and was causing no end of problems. No doubt Mickser Condon had words at the interval as the army officer never got the same room on the resumption and his impact in the second half was nothing to what had gone before that.
Midfield was also going to be decisive. Roli Sweeney up against Alan Barry with Kevin O'Neill taking on Morgan O'Sullivan.
Alan Barry is one of the unsung heroes of club football in Kildare. He is to Sarsfields what Willie McCreevy was to Kildare. A real grafter, an incredible worker with an engine that will stay ticking over when others are looking around for assistance.
His role on Sunday was a spoiling one. Keep the ball away from Sweeney. Simple, well not exactly. Roli is no slough and while he may not have dominated as he did in the semi-final replay against Kilcock, he still had a huge bearing on the outcome.
Morgan O'Sullivan has been a revelation this season. One of the brightest prospects at schools level, he opted out in the cause of basketball. However, he seems to have regained his football appetite. His departure, through injury, was a huge blow to Sarsfields.
Up front is where both sides seemed to stumble and at times lost their way. Moorefield particularly in the opening half were the greater culprits.
Umpire Porkey Lambe was considering looking for 'improved conditions' at the break as he tried to drink a half time cup of tea while at the same time waving his hands in the air.
Coming from a team that has put up some tremendous score lines on this voyage, the Moorefield backroom boys must have been wondering if the breaks were ever going to come their way.
While Patrick Murray, had his fair share of misses, he was, undoubtedly, the best forward on view. His speed has to be seen to be believed. His long stride left Sarsfields' Brian Moylan yards adrift, and the Sarsfields man would be considered one of the quickest defenders in the business at this level.
When it was badly needed Murray took the game by the scruff of the neck and was the difference between the sides.
Ross Glavin is another player with huge potential. Only 17, this lad, properly handled, has the potential to go to the top of the ladder, while Mark Sexton showed that he is probably Moorefield's find of the season.
The Sarsfields attack did extremely well in the opening half. For long periods they were living on scraps but with Padraig Brennan finding the range and David Earley beevering around making space, they certainly put it up to the Moorefield rearguard.
However once The Moores tightened up after the break there was no other avenue left open for the champions.
While Sarsfields did miss some crucial frees, the Moorefield defence must also be complimented they hardly fouled anywhere inside 35 yards or so throughout the entire game.
John Whelan seemed to steady the ship when introduced but when Moorefield got sight of the Cup they were never going to let to.
A fascinating contest played hard, very hard, but extremely sporting. Both teams are to be highly complimented, not just on this occasion but over the past four years.
Sarsfields, despite injury setbacks that would have crippled most teams, showed just how worthy champions they were in 2001.
Moorefield, on the other hand never panicked, kept control and in the end through-
out deserved their win.
It is a tremendous achievement for the Dermot Burke Cup to remain in Newbridge for the fourth consecutive season.
Yes indeed Newbridge is certainly ruling football at present. It would seem the rest are falling further and further behind.
For another twelve months, at least, Newbridge is the king of football, with Moorefield sitting proudly on the throne.
Congratulations also to referee Mick Monahan who did a fine job.