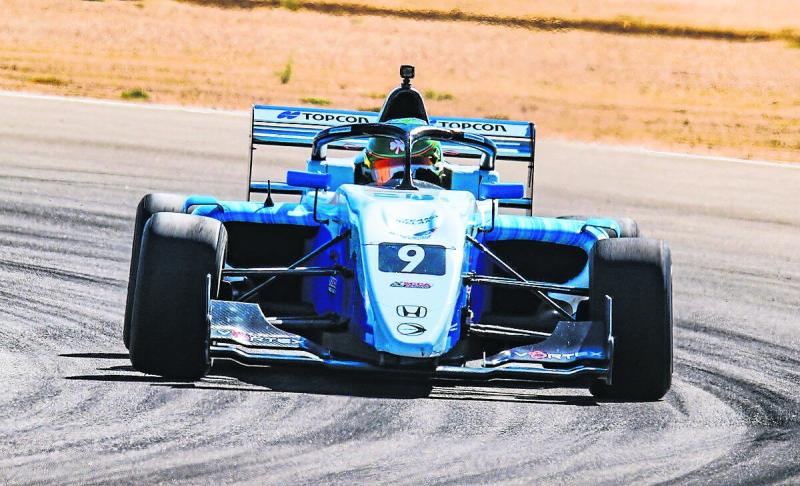 Following a successful rookie season in 2019, Irish driver James Roe Jr. will continue to carve out a formula career in the United States, confirming his second bid at the Formula Regional Americas Championship Powered by Honda title with team champions Global Racing Group.

“We’re very excited to bring James back to the FR Americas Championship for 2020,” said Christian Pedersen, CEO and President of Global Racing Group.
“During 2019 he showed continuous progress in his transition to the Ligier JS F3 car and remarkable con-
sistency. As we all know, that’s the foundation for the best possible performance and with the work James has put in during the off-season we had no doubt that pre-season testing for 2020 would show a big step forward; and indeed the continued progression was immediately clear and we look forward to seeing James visit the podium frequently in 2020. We’re also very excited to continue the work with John Campion’s CJJ Motorsport who is providing solid backing and advice to James.”
Returning to the side of Naas man's No. 9 blue and white machine is supporter CJJ Motorsports, a program that provides opportunities for the next generation of Irish motorsport talent to continue the growth of Ireland's racing legacy worldwide.
“James is a key part of the CJJ Motorsports Driver Programme and 2020 is a big year for him,” said John Campion, Principle of CJJ Motorsport.
“He has a great team behind him in Global Racing Group. Testing so far has been extremely positive. I believe that James has a very bright future ahead of him. He has been a great ambassador for CJJ Motorsports and is doing a fantastic job of representing Ireland on the global stage as one of its brightest stars.”
Last season, Roe the nephew of CanAm Cham-
pionship winner and Irish Motorsport Hall of Fame driver Michael Roe, picked up a win at Road America along with multiple top-five finishes and finished in the top-10, 15 of the 16 rounds. While his consistent results paved a way to a solid fifth-place finish in his debut professional race season, Roe is looking for more out of his sophomore season.
With the ultimate championship prize, a scholarship for a full 2021 season in Indy Lights with a Honda-supported drive, on the line, Roe spent the off-season laying the groundwork for a championship assault.
“I’ve never worked so hard during an off-season in my racing career,” said Roe. “I moved to the epicenter of racing in Indianapolis to be closer to racing resources like sims, personal race-focused training from PitFit and developing opportunities.
“Making the decision to return to Global Racing Group was easy,” Roe continued. “The team delivers professionalism on all levels. Last year we developed a routine to work as a unit. This year over the winter, we mapped out a very focused program. This year's championship is going to be extremely competitive given that some IndyLights drivers are moving down and that many new teams have joined, I’m excited to get going.
“I'm honored to have all of last year's sponsors and partners on board again for this year, I feel there is a huge amount to be said for retaining sponsors and the fact they are all seeing a true benefit from our relationship is fantastic. CJJ Motorsport has been completely re modeled over the winter with a more long term goal in mind, Topcon and Vortex companies also increased their commitment to my FR Americas championship efforts in the offseason. I’m extremely thankful for that,” Roe concluded.
At the conclusion of 2019, Roe was celebrated at the MIS Motorsport Champions of Irish Motorsport Awards ceremony in Dublin, Ireland. Roe was presented with one of the most prestigious honors in Irish motorsport, the Sexton Trophy, naming him the Irish Young Racing Driver of the Year. The award also includes support worth a total of €50,000 to aid in the development of his 2020 international racing career.
“I was honored to win this award,” said Roe. “When I think about previous winners and what they have gone on to achieve on the international stage there is an over-
whelming obligation on me to perform and follow in their footsteps.
“This award carries a lot of weight in the US and with it I along with my team can accelerate our plans to compete in IndyCar with some of the best drivers in the World.”
Roe is proudly sponsored by Bennett Law Offices, Majestic Ireland Road Trips, Fitzwilliam Court Holdings Ltd and Dynamic Center for Vision Therapy.
SCCA Pro Racing recently announced its new partner-
ship with Formula Americas Network which will provide live streaming, live television and live timing and scoring for the championship staring at the season opener at Mid-Ohio Sports Car Course June 26-28 on FANRacing.live network.