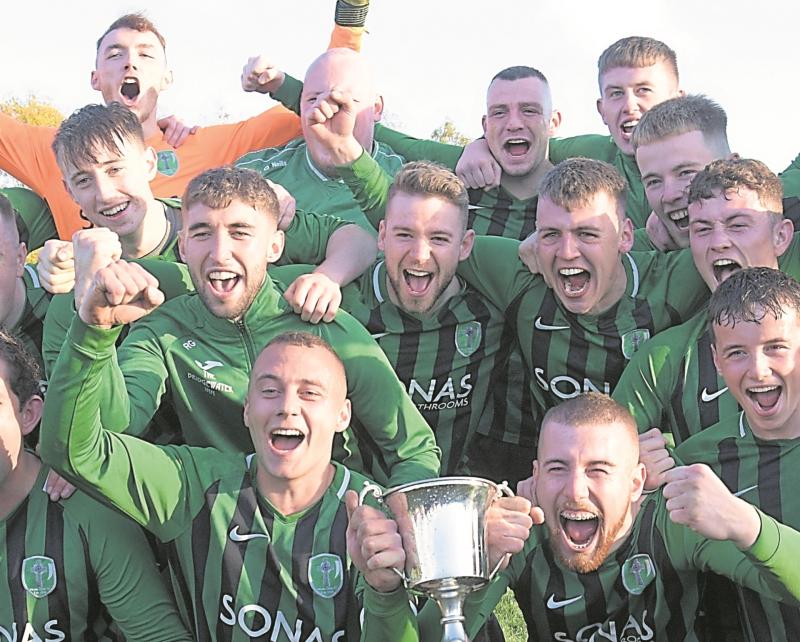 The Kildare and District Football League will kick off their 2020 season this weekend. In what has been a tumultuous year since March for all involved in sport the KDFL will finally kick off what will be a short season to bring them to 2021 and maintain their one calendar year status.

On March 11 the KDFL held their Annual General Meeting in the Keadeen Hotel and they were making final preparations for League commencement later that month.
That was all to change just one day later when the Government announced it first steps into lockdown with the cessation of all football activities introduced just one week from kick off.
Since then Covd19 has rocked the world socially and economically and it has been a very difficult period of almost five months for all involved in football clubs around the county and it’s environs as their volunteers struggled to keep their clubs afloat and maintain their standards as they awaited news from the Government and Health Authorities on the resumption of games.
With the green light given for the commencement of competitive games from July 18 the KDFL offered a further two weeks to all Clubs to prepare.
On July 13 the League met with all Clubs to present the proposed re-structure of the League for 2020 outlining formats and processes.
A new look format which sees a champions league scenario in all seven divisions will be rolled out with Divisions split into two groups, each team will play each other home and away with the top two teams in each group playing in semi finals and a Final for the League title.
The remaining teams in each group with play out for Divisional Shield titles and all Clubs will compete in the Divisional Cups.
Unfortunately the KDFL Lumsden League Cup and League Shield will not be played for in 2020 due to time constraints.
The inaugural Adrian Melia Charity Shield between 2019 Senior League winners Suncroft AFC and League Cup Winners Clonmullion AFC will also be deferred due to current restrictions on attendances at outdoor events.
Teams will all have the opportunity to enter Provincial and National Cup competition at the optimum time with those competitions due to commence in October.
The KDFL Oscar Traynor team continue to train in preparation for the resumption of the 2019/20 competition where they see themselves pitted against the Galway and District League in the Quarter Final.
A home win for the KDFL will see them secure a semi final tilt at the Defence Forces.
Although a short season domestically there is still a lot of football available for teams across the Kildare League this year and we hope to see good participation in outside competition and all going well without further disruption.
The main focus now will be on the safe return to football for all. Protocols have been distributed and Clubs have been fantastic in their approach and preparations.
During the closed period Clubs have been kept up to date with all guidelines and protocols are they were issued and the League were busy on social media when they took the opportunity to trawl through their archives with many reports/ photos/ league tables and features from 1994 onwards.
These features will continue during the season. Wayne Doyle and Shauna Mackey have also been very busy over on the KDFL Podcast site with their insightful interviews with people from the wider football community, from Club members, stars of the game and most recently with legendary Referee John Dwane.
We would like to take this opportunity to thank every for their patience, help and assistance during the closed period and wish everyone the very best of luck over the coming months.
Thanks also to our sponsors / Media and members of the ISRS Kildare Laois Branch of Referees for their continued support.