Clane United go down at home 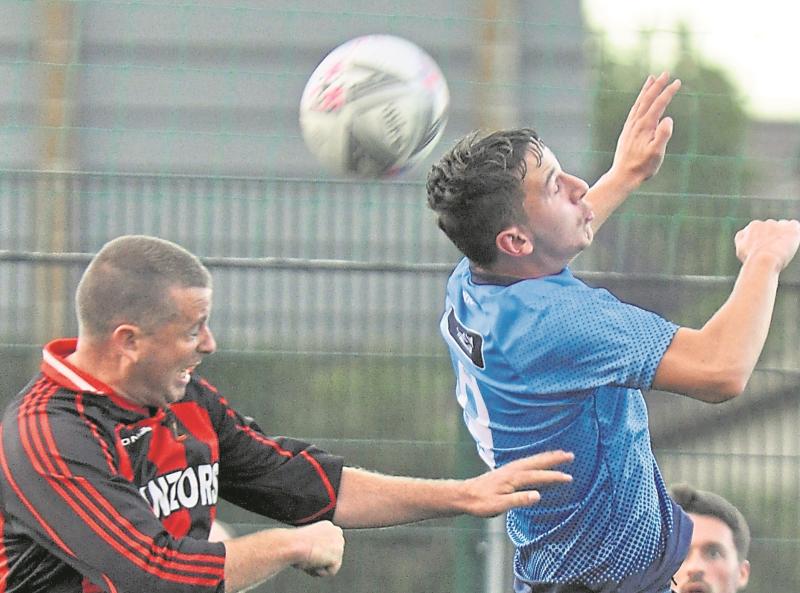 Clane United FC proudly welcomed Rathangan AFC to Doctor’s Road in Clane on Friday evening last in the opening game of the KDFL’s 2020 season.
The Club have made tremendous strides over last season when they installed a state of the art all weather facility.
It is the culmination of years of hard work by their Executive and members to bring to fruition the fabulous set up and congratulation must go to all for their efforts.
A new look format which sees a champions league scenario sees the Senior Division split into two groups, each team will play each other home and away with the top two teams in each group playing in semi finals and a Final for the League title.
The remaining teams in each group with play out for Divisional Shield titles and all Clubs will compete in the Divisional Cups.
It was the home side who started the better on Friday night and after just four minutes Clane marksman Killian Patchell put them one nil up when he was quickest to react to a John Fitzharris cross giving the visiting keeper Craig Shannon no chance.
Rathangan were stung into action following this early set back and began to make inroads in to the game with both wide players Aaron Doyle and Sam O’Loughlin creating some headaches for the Clane defence.
They came close ten minutes later when Behan was unlucky with a header from an Iain Doyle delivery.
Doyle was impressive throughout and the sides were level midway through the half with an Neil Cox own goal following a Doyle corner.
Just a couple mintues later the sides were level with an og from a Iain Doyle corner. 1-1.
Clane were seriously determined in this game and were not phazed by the goal, having two great chances through Eoin Maguire at the other end forcing Rathangan’s Shannon into two top drawer saves.
Five minutes before the break Rathangan edged ahead through Sam O’Louhglin when he turned in a rebound from Behan to make to 2-1 to the visitors.
The second half started as the first with Clane on the ascendancy putting the Rathangan defence and keeper under pressure in the early stages.
However it was Rathangan who came good with a fine display in the last third as on the hour they went 3-1 up when a long throw by the visitors was latched onto Captain Tommy Power who made no mistake from close range.
Both sides made changes which made for a tense and frantic last half hour with Lee Moore coming close to extend the visitors lead.
Best for the winners in what was a cracking display were Iain Doyle and Tommy Power while for Clane Jack Kelly, Gavin O Dwyer and Ciaran Kelly excelled.