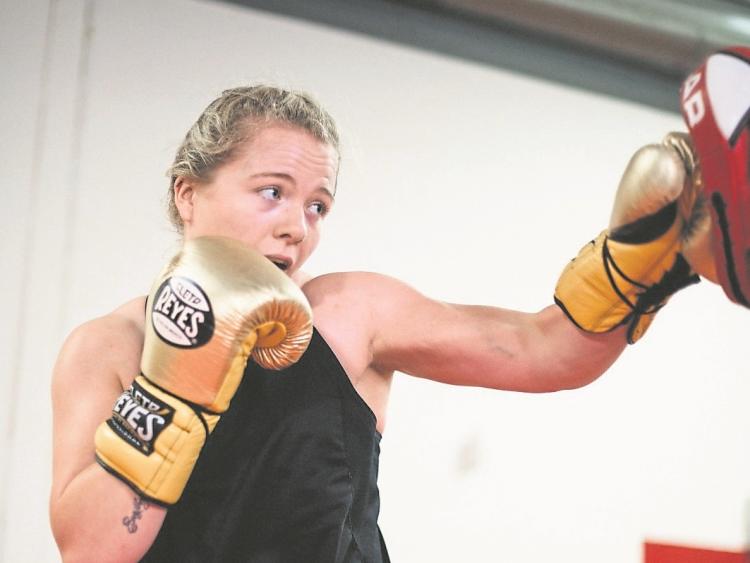 This Saturday night Kildare's Katelynn Phelan will enter the Lion's Den to hunt the biggest results of the year in Irish boxing.
The young Kildare Town welterweight has secured a major fight with German-Ukrainian sensation Jessica Schadko and flies out to the Munich suburb of Donauwoerth week for her first title contest.
A fight initially meant to take place early last month, the bout was postponed after her opponent fell ill. Re-fixed to October 17, 20-year-old Phelan will put it all on the line for three belts - the WBC Youth title, the WBF title, and the WIBA title.
While Ireland's youngest professional female boxer has three wins from her three pro fights thus far, Schadko is unbeaten in eight and there is significant investment being placed in the 19-year-old phenom. The lilywhite is stepping up from four rounds all the way to ten for this bout and, if a jump in rounds and quality opposition isn't enough, she will be fighting Schadko behind closed doors in the German's own boxing club, the CPI Gym.
However, Phelan and her team Boxing Ireland Promotions and coaches Niall Barrett and father Paddy - are hugely confident. A former amateur star, the St Brigid's BC graduate won nine Irish titles, European Junior bronze, and World Youth bronze, and feels more than up to the challenge this weekend.
Phelan has prepared more for this chance than any other fight or tournament in her life.
“I've been training for the past few months for this fight, preparing, working hard, day-in, day-out, working with my coach Niall and my dad Paddy. Training's been tough but it's been great, I've been enjoying every single day” she said.
Phelan believes that she can beat the heavily-backed Schadko. The younger sister of fellow pro boxer Allan outlines how “I know that Jess is going to be in top form as well, she's going to try her hardest, but we're going to come out on top. This is a big challenge and we are fighting in her back garden but I've fought all over the world in numerous rings. I'm up for a challenge, who doesn't love a challenge? I've full confidence in myself and I know I'm ready for this.
“I started boxing when I was five or six years old and everybody used to tell me 'you're going to go to the Olympics'. Of course, I'm stubborn, and as soon as I started to think for myself, I decided that my style suits more to the professional style of boxing. This is the start, I have massive goals ahead and I know I'm well capable of achieving every single one of them that I put my mind to. This is a big, big goal but it still is only a stepping stone to what I am capable of.”
Coach Barrett, who people may also know as #13 and one of the winners of RTÉ's 'Ultimate Hell Week' earlier this year, has been fastidious in his research and preparations for this fight.
The analytic cornerman details how “they're going to be facing a fitter, stronger, faster Katelynn Phelan than they would have fought before. All her numbers have improved, her PBs are smashed, and we've added lots of new skills to her arsenal. Unfortunately for them, the delay has actually worked in our favour.
“For us, preparation is all about strengths and weaknesses. We looked at Katelynn's strengths and we looked at Jessica's strengths and weaknesses, and we formulated a game plan to exploit those. Every day we've been working, day-in, day-out honing that game plan and we have full confidence in it. We have Plan B, Plan C.”
Manager Stephen Sharpe from Boxing Ireland Promotions is fully backing Katelynn for the win.
“It's generally unheard of for a fighter of Katelynn's experience and age to get an opportunity like this, however, we are in unprecedented times and it's fallen perfectly for Katelynn," said Sharpe.
Phelan's fight this Saturday night will be streamed live at http://live.bgb-movie.de/