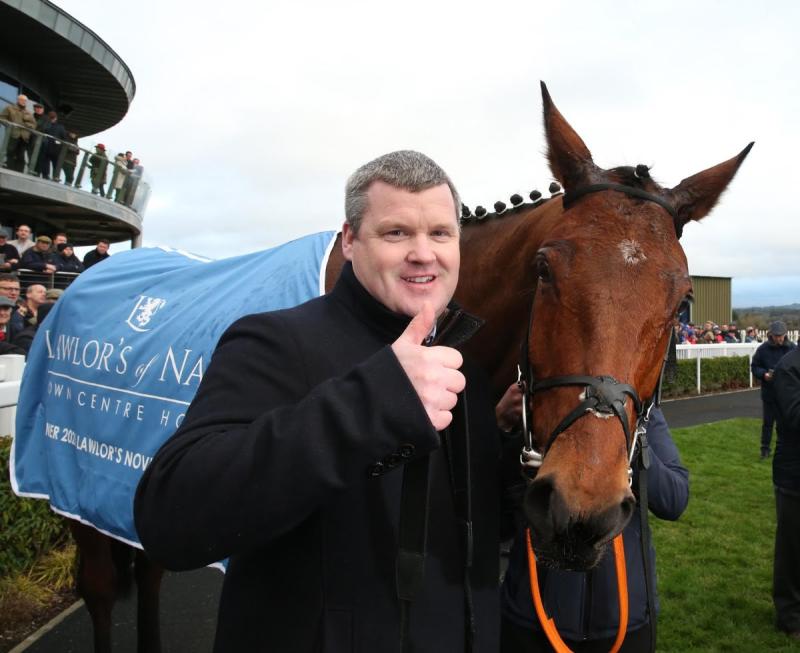 Naas Racecourse is getting set to host the first Grade 1 contest of 2021 this Sunday, January 10. The Lawlor's Of Naas Novice Hurdle and 12 horses remain at the five-day stage for what is shaping up to be a red-hot affair.

Gordon Elliott is attempting to claim the spoils in the 2m 4f feature for the third consecutive season and fourth in five. The Cullentra House trainer could be represented by Fantasio D’Alene, Farouk D’Alene, Ragnar Lodbrook and Leopardstown St Stephen’s Day winner, Wide Receiver.

In contrast, champion trainer Willie Mullins has left just one horse in the race he has won three times since the Lawlor's Of Naas Novice Hurdle attained top-tier status in 2015.

Blue Lord made his first racecourse appearance in 436 days since winning a maiden in France at Punchestown on November 24 to deny market favourite Julies Stowaway by half a length under Paul Townend.

Owned by Simon Munir and Isaac Souede, the Blue Bresil six-year-old is expected by Mullins’ son and assistant Patrick to have stepped forward considerably on that showing when he returns to Co Kildare.

“We were very impressed with Blue Lord in Punchestown,” stated Mullins Jnr. “We think there’s a lot of improvement to come from him. He’s a horse who will jump a fence in time but we think the Grade 1 Lawlor's Of Naas Novice Hurdle is the sort of level he is up to, and it will tell us more.

“He came to us very well-schooled and he has always jumped well at ours. It’s a big step up but that’s the way the programme is in Ireland. You’re only taking on horses with one or two more runs so that’s not a major worry.”

Henry de Bromhead could be represented by the ultra-impressive Bob Olinger, the Robcour-owned son of Sholokhov and facile Gowran Park bumper winner – when ridden by Patrick Mullins – who followed up a one-length defeat by Champion Bumper victor Ferny Hollow on his hurdles bow back at the Kilkenny venue by cantering to a 14-length triumph when stepped up half a mile at Navan last month.

The locally-trained Ashdale Bob, who along with Farouk D’Alene is the only dual hurdle victor in the contest, stands his ground along with Jessica Harrington stablemate Crosshill, a maiden hurdle winner at Punchestown before having to settle for second when dropped back to the minimum trip at the beginning of December.

“Ashdale Bob won the last day in Navan and we’ve been very happy with him,” said Kate Harrington, who is assistant to her mother. “He’ll do a bit of work tomorrow (Wednesday) and we’ll decide if he’ll go to Naas for the Grade 1 Lawlor's Of Naas Novice Hurdle.

“Crosshill was very impressive over 2m 4f winning his maiden hurdle and that form has worked out well. We dropped back to two miles the last day and I think we got the tactics wrong on that occasion. The step back up in trip will definitely suit.
“We are very happy with him as well. Again, he will work tomorrow (Wednesday) and we will make a decision then on whether he will run.

In-form trainer Tom Gibney has declared Great Bear and the dozen is completed by Joseph O’Brien’s Mighty Blue, Gavin Cromwell’s Gabynako and Noel Meade’s Flanking Maneuver, who would be making a quick reappearance having only shed his maiden status at Fairyhouse on Sunday.

The Grade 1 card is complimented by another strong looking renewal of the Irish Stallion Farms EBF Novice Chase over two miles in which Willie Mullins has another strong hand with Blackbow and Energumene. Potential rivals there include recent winners Captain Guinness, Fils d'Oudairies and Farmix.

In light of the current restrictions with racing continuing behind closed doors, Naas Racecourse and Lawlor's Of Naas wanted to kick start 2021 in style with a free competition. Ahead of the eagerly awaited Grade 1 Lawlor’s of Naas Novice Hurdle, Lawlor’s & Naas Racecourse have teamed up to give an amazing prize. The winner and a guest will be one of the first to stay in the newly opened extension at Lawlor’s of Naas Town Centre Hotel, treated to dinner for two and a decedent afternoon tea experience. The lucky winner will also be given a €500 One4All Voucher and an exclusive stable yard visit to leading National Hunt trainer Gordon Elliott’s yard which is the home of 2020 Lawlor’s winner, Envoi Allen. To enter the competition visit https://naasracecourse.com/competition/