Racing: Slippers ends career in Punchestown, where it all started 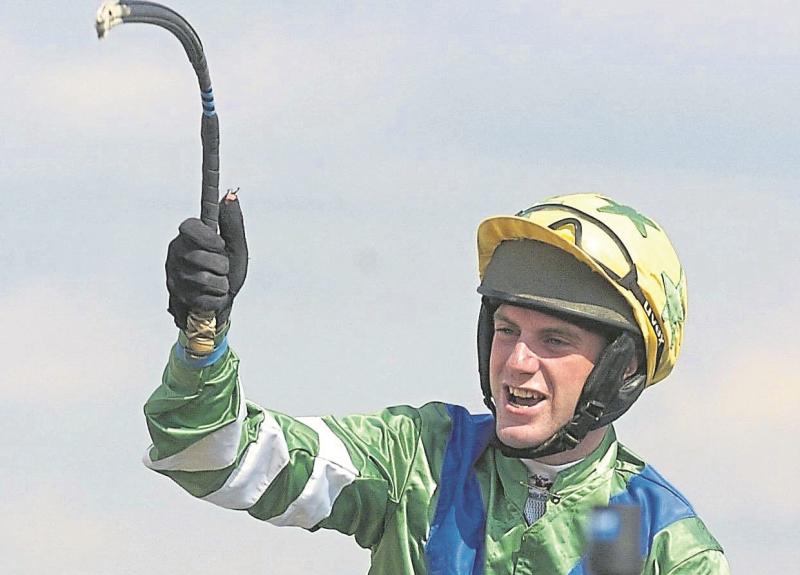 He rode in his first race, as an amateur jockey at Punchestown at the age of 16, just four days after being granted his licence.
His first winner came some 18 or 19 rides later when Teknash flashed across the winning post at Wexford; the same horse giving the Naas native his second winner and his first at the famous Galway Festival.
Meet Niall Madden, aka Slippers, a member of that great horsey family that included his dad, also Niall aka Boots; his younger brother Tom, aka Socks while his mam Patricia is daughter of Toss Taaffe, former champion jockey; while his uncle was the late great Pat Taaffe of Arkle fame.
So a family steeped in the workings of racing and all that entails.
On Thursday last, Punchestown held its annual New Year's Eve meeting and it was here that Niall (Slippers) decided to announce to the racing world that he was stepping away from racing after some nineteen successful years in the saddle.
No doubt about his greatest achievement, his greatest success and every jockey's dream — winning the Aintree Grand National. That was back in 2006 when he rode the Martin Brassil trained Numbersixvalvardie to clinch what continues to be described as the greatest steeplechase of them all.
In 2002/03 Slippers was runner-up in the amateur jockeys championship but the following year (’03-’04) he clinched that much sought-after crown with 20 or so winners to spare and soon after that, encouraged by trainer Noel Meade, turned professional.
It has been long been established that a horse that can win the Thyests in Gowran Park is a live contender for Aintree, and indeed Fairyhouse, Grand National honours.
Numbersixvalvardie won that famous race in 2005, a race that probably put the Naas native on the road.
Niall picks up the story when he spoke to the Leinster Leader during the first lockdown back in March 2020.
“I had ridden him in two chases, before the Thyestes and I won the two of them; my first time was riding him in Navan, he was actually a spare ride on the day; no one around to do the weight, I think he had just 9-11, I was living in Navan, just pure luck; close to the track and dad knew Martin (Brassil) so he rang him to see if I was around and available to take the ride and that was it.
“It was great to throw the leg up on him, he won that day and I won another chase on him and then The Thyestes.
“Ruby (Walsh) rode him in the Irish Grand National (2005) beating his dad Ted's Jack High by three-parts of a length.”
It was in the Paddy Power Chase in Leopardstown (Christmas meeting) when Slippers was back up on Numbersixvalvardie, a day he was brought down, and again he was on board in a hurdle race at Naas, when finishing fifth.
Slippers explains that when he came back into the parade ring that day in Naas he was offered the ride in Aintree by trainer Brassil and owner Bernard Carroll.
“As a young fella I was just over the moon; if he had asked me to ride a donkey the same day I would have and I don't mean that in a bad way but every jump jockey wants to ride (and win) the Grand National.”
A remark after winning that day in Aintree by another top jockey remains firmly with the Naas native.
“It was Timmy Murphy who said to me after the race ‘you won't realise what you have done for a couple of years’ and I really did not know what he meant at that time but after a few of years I knew what he meant.”
Niall's other notable victories include the 2005 Galway Hurdle aboard Noel Meade’s More Rainbows, the 2006 Christmas Hurdle on Jazz Messenger and the 2010 Galmoy Hurdle with former Cheltenham Gold Cup hero War Of Attrition, trained by Mouse Morris.
Madden’s final winner came aboard Philip Dempsey’s The Long Mile in the Tim Duggan Memorial Handicap Chase at Limerick on Monday December 28, a horse owned by JP McManus, with whom Madden enjoyed a long association.
As for the future Niall says initially he intends to keep doing what he has been doing over the last while, riding out for various trainers, just not riding professionally any more.
“I have no major plans” he told the Leader this week, adding “we'll see what happens, what turns up, I'm open to all job offers but I would love to stay in the industry as I still love it.”
And with the pedigree that the popular, now 35-year-old, has it will be no surprise that is how the next chapter of his career pans out.
One way or another Niall ‘Slippers’ Madden can certainly look back on a brilliant and successful career, a career that saw him fulfil many of his boyhood dreams and aspirations, culminating back in 2006 when crossing the line, standing in the stirrups, waving to the crowd as he joined the immortals who have been successful in the greatest steeplechase of them all, the Aintree Grand National.
We wish Niall, his financée Áine O'Connor and all his family all the best.
No doubt we will be hearing more in the future from this talented and highly popular, now former, top jockey.